Gunman Arrested After Shootout With Police at Trump Resort 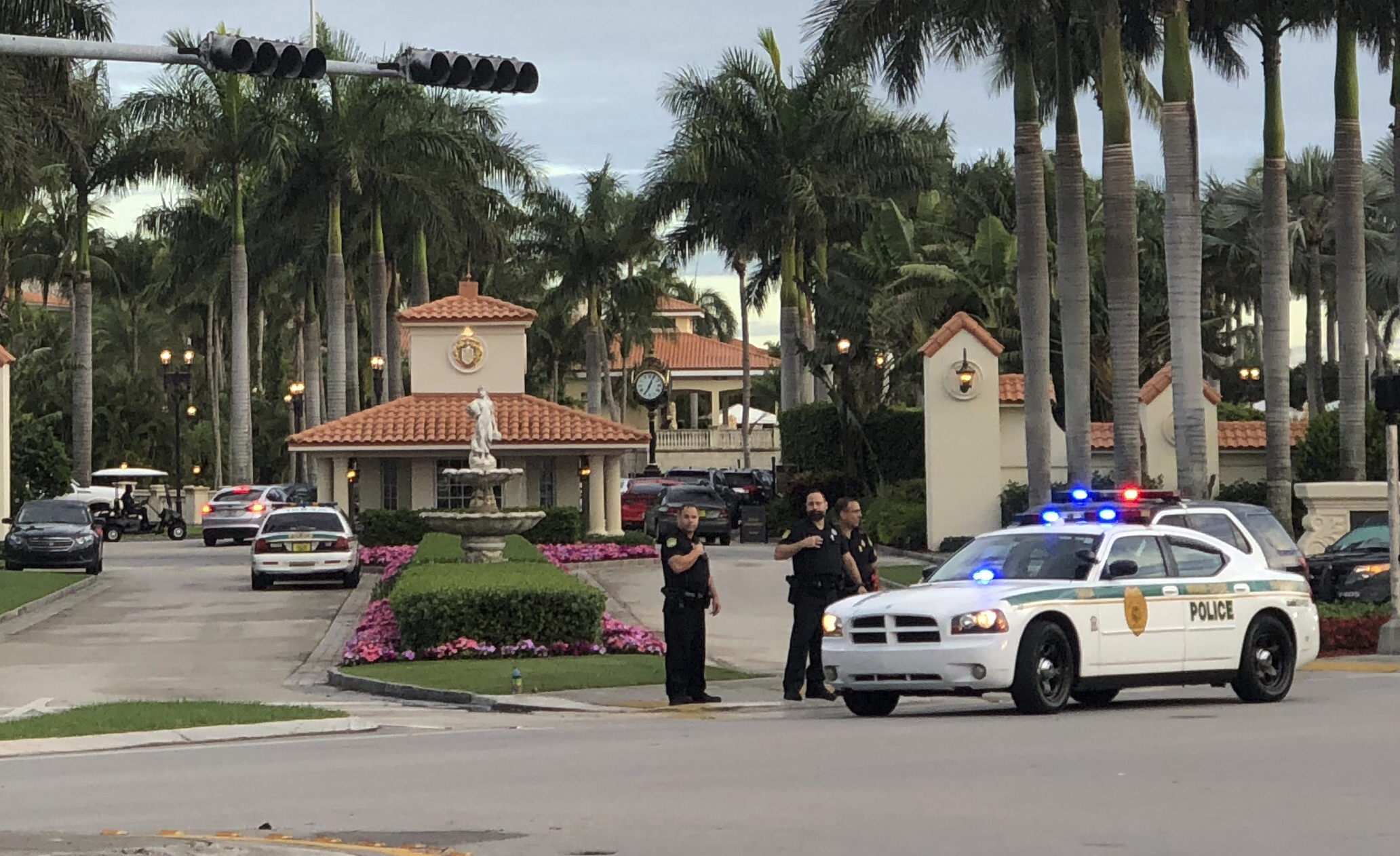 DORAL, Fla. — Gunfire erupted early Friday at President Donald Trump’s Miami-area golf resort, as a man shouting anti-Trump rhetoric draped a flag over a lobby counter and exchanged fire with officers in what one official called an “ambush” before being arrested, police said.
One officer broke an arm and the suspect was wounded by gunfire in the incident, which began around 1:30 a.m. at the Trump-owned Trump National Doral Golf Club.


“A huge thank you to the incredible men and women” of the departments, adding that “every day they keep our community safe.” — Eric Trump
Trump was not at the club at the time.

Miami-Dade Police Director Juan Perez identified the suspect as 42-year-old Jonathan Oddi of Doral. Police were preparing a search warrant to enter Oddi’s house, Perez said. His neighbors were evacuated Friday morning as officers swept the area looking for booby traps, Perez said.
“We don’t know what his intentions were in the long term but we know what he was doing at the time — he was trying to engage our police officers in some kind of ambush-type attack,” Perez said.
In plotting the ambush, Perez added, “He did succeed and he did lose.”
Video footage showed the conscious suspect being wheeled into a hospital on a gurney.
Perez said the man took down a flag from the rear of the complex and draped it over a lobby counter.
“He was yelling and spewing some information about President Trump and that’s what we know so far. And he had an American flag that he did drape over the counter,” Perez said.

The man fired shots into the ceiling and waited for officers to arrive, he said. Four officers from Doral and one from Miami-Dade quickly encountered him and exchanged gunfire. The man was arrested without further violence.
“You know, these officers did not hesitate one second to engage this individual that was actively shooting in the lobby of the hotel,” he said. “They risked their lives, knowing that, that they had to get in there to save lives in that hotel.”
Eric Trump, the president’s son and executive vice president of the Trump organization, tweeted early Friday, “A huge thank you to the incredible men and women” of the departments, adding that “every day they keep our community safe.”

Secret Service on the Scene

The Secret Service issued a statement saying agents from the Miami Field Office were at the scene and working closely with other agencies.
It added, “No Secret Service protectees or security operations were impacted as a result of the shooting.” 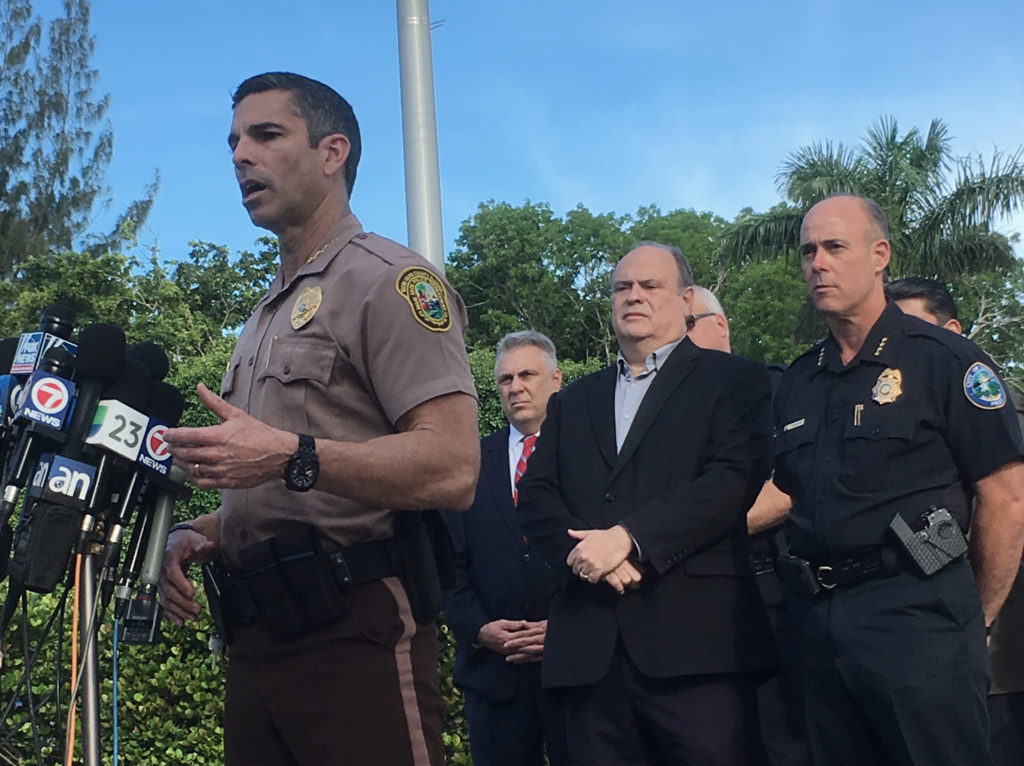 Miami-Dade Police Director Juan Perez speaks with reporters during a news conference Friday, May 18, 2018 about the shooting at the Trump National Doral Golf Club in Doral, Fla. Gunfire erupted early Friday at President Donald Trump’s golf resort, as a man shouting anti-Trump rhetoric draped a flag over a lobby counter and exchanged fire with officers in what one official called an “ambush” before being arrested, police said. (AP Photo/Freida Frisaro)

David Jiminian said he lives in Cordova Phase II, the same gated complex where Oddi lives. Crime-scene tape marked off a driveway to the community and police cars were parked outside.
Jiminian said he has seen Oddi going in and out of his garage but has never spoken to him. He also said Oddi drove a new sand-colored Jeep Renegade.
“It’s pretty crazy,” Jiminian said. “It’s scary that it’s so close to home.” Jiminian added that he had never noticed any anti-Trump bumper stickers on Oddi’s vehicle.
The large Trump-owned golf facility in the growing suburb was surrounded by a heavy police presence Friday morning and news helicopters hovered over the scene. The entrances were blocked, and yellow caution tape was stretched across the main gate.

The golf resort previously known as the Doral Resort & Spa was purchased by the Trump Organization in 2012. Its signature course is the Blue Monster at Doral.
The Trump National Doral, which includes several buildings for lodging and an expansive clubhouse, is among the largest hotels in the Miami suburb. It’s about 8 miles from Miami International Airport.
Its website describes it as an 800-acre resort with 643 total guest rooms, more than 100,000 square feet (9,300 square meters) of event space and four golf courses.
In June 2016, the PGA Tour announced that the prestigious World Golf Championship hosted at the Trump National Doral since 2007 would relocate to Mexico. The announcement infuriated then-candidate Trump, who called the move to Mexico a “sad day for Miami, the United States and the game of golf.” Trump said in a Fox News interview with Sean Hannity that, “I hope they have kidnapping insurance.”
PGA Tour Commissioner Tim Finchem said the move had nothing to do with politics, only finances. Cadillac did not renew its title sponsorship of the event, and another sponsor that wanted to be at Doral could not be found, Finchem said.