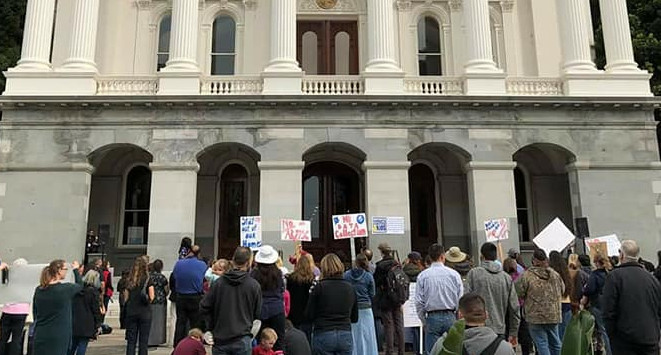 Hundreds of homeschool supporters rallied Monday (March 19) on the Capitol steps in Sacramento, protesting a bill that would allow fire inspectors into their homes.

Stefanie Fetzer founded Parents United 4 Kids in 2016, as a Facebook group. The motivation was to defeat a bill that year, SB 18 “Bill of Rights for the Children and Youth in California.” The group succeeded.
The group formed a PAC. “Our plan is to support candidates who support parents’ rights,” Fetzer said.
AB 2756 motivated Fetzer again to organize the rally on the first day the bill could be heard by a committee (it is currently not scheduled for a hearing).

Parents and children gathered on the west steps of the Capitol. It capped off a day of lobbying for change, if not outright defeat, of the bill. Organizers estimated 400 attended from throughout the state.
Crowd size mattered to Fetzer.
“We felt we needed to come out strong from the beginning. This bill is a bad idea,” she said.
State Sen. Joel Anderson (R-San Diego County) told the crowd they need to continue to fight for their children.
“Your kids are worth it. Don’t get angry with (legislators), try to explain to them why it’s so important. Make sure they understand who committed you are. The best thing to happen is not just to defeat bad bills, but to encourage homeschooling.”
Sen. Scott Wilk (R-Antelope Valley), also spoke. He is the vice chair of the Senate Education Committee, which would hear the bill if it gets that far. 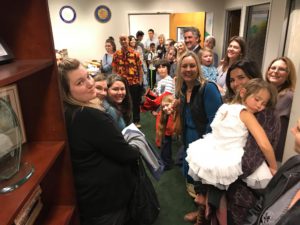 Opponents of AB 2756 gather in the office of the bill’s author, Assemblyman Jose Medina (photo courtesy of Jessica Vanhille-Hart)

“The people who sit in the seats with me believe they can raise your children better than you can raise them,” Wilk said to a chorus of boos.
Many parents and political hopefuls also addressed the crowd. Other elected leaders speaking included Sen. Mike Morrell (R-Rancho Cucamonga), and candidate for governor Assemblyman Travis Allen (R-Huntington Beach)
“It was awesome. It was a great turnout,” said Jessica Vanhille-Hart, a Modesto homeschool mom of two boys.
She says it is important to keep on the pressure.
“We’re not going away. We are going to keep showing up. We are not going to let this go,” Vanhille-Hart said. “We have the right to raise our kids the way we see fit.”
She was one of a group of parents who crammed into Medina’s office on Monday, to let his staff know how they felt.
“I appreciate that parents rallied at the Capitol today to vocalize their opinions on AB 2756. Educational oversight is an important topic that is rightly met with diverse thoughts and perspectives,” Medina said.

Medina’s AB 2756 initially required homeschool homes to be inspected yearly by a local fire inspector.
Groups like the Home School Legal Defense Association and the HomeSchool Association of California felt such an intrusion violated the Fourth Amendment, which requires a warrant for such searches.
“The stigma that homeschoolers are more likely to abuse or neglect their children because they don’t have to interact with the state in a personal way is offensive to segment of our society that are really performing a valuable service – providing responsible, respectful, productive, well-educated adult with over 70% attending college,” said Mike Smith, president of HSLDA.
Vanhille-Hart agreed.
“There is no need for them to visit our home and invade our privacy,” she said.

But, another aspect that homeschool advocates object to remains — the collection of certain data.
In California, home schools are considered private schools. Families must submit a yearly affidavit to the state which contains the name of the school, address and enrollment figures.
The law also requires the school, whether traditional or homeschool, to maintain records of what courses are offered, list of faculty and their criminal records.
Medina’s bill would also require school administrators to list the nature of their school: conventional or traditional private schools; private school satellite programs; private online or virtual schools; parents, guardians, or other individuals who operate a private home school; and certified nonpublic nonsectarian schools.
That doesn’t fly with HSLDA’s Smith.
“There is no justification to collect data to try and formulate legislation going forward,” he said. “Homeschoolers have homeschooled under the private school exemption for 35 years and there is no reason to change.”