The Clovis City Council will hear results of a survey on what its citizens want Monday night. However, it is a familiar tune: public safety and street repairs.

City staff will present the results of the mostly-online unscientific survey of budgeting priorities. But, a staff report says, “the response was valuable in gaining a large amount of feedback from the City’s residents.”
This is the fourth year of the survey. Every time, public safety and street repairs have finished 1-2. Residents ranked nine categories from essential to not important at all. 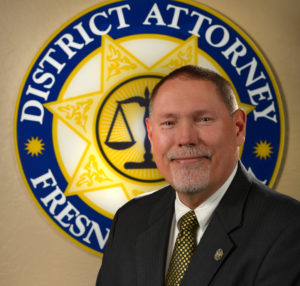 This is Blake Gunderson’s last week with the Fresno County District Attorney’s Office. Unless he is hired again.
Gunderson, the assistant DA, has served the department for more than 30 years and is retiring Friday.
But he’s not leaving. District Attorney Lisa Smittcamp wants Gunderson to stick around for the transition. But that will require action by the Board of Supervisors.
The board needs to officially hire Gunderson parttime to get around a state pension law that requires public employees to be retired 180s days before they re-enter public service. That law (AB 340) took effect in 2013.
The county health officer, Dr. Ken Bird, is in the same situation. Bird, who has worked for the county since 1986, is scheduled to retire at the end of March. The board will honor him by declaring Tuesday “Dr. Ken Bird Day.”
The Public Health Department wants to keep him around until his replacement his hired.

New DA Building Lease: On, Off, Now Back On?

Last year, the county entered into an agreement with the landlord of the Rowell Building at 2100 Tulare Street (at the corner of Van Ness in downtown Fresno), to lease and eventually purchase the building to house the DA’s office.
The landlord, River Park Properties III, sent the county a letter of termination of the deal Jan. 31 (one day before a deadline) because it was unable to obtain tax credits that would make the agreement economically viable. According to a staff report, that was in part due to recent congressional action on tax reform.
The county and River Park Properties III have reached a new deal. It allows the landlord to once again apply for New Market Tax Credits. But it also permits the landlord to opt out, this time by July 15.
Under the lease agreement, the county would pay more than $2 million annually for rent and upkeep.
River Park Properties III is affiliated with local developer Ed Kashian, who signed the new agreement.
The Board of Supervisors will vote on the new agreement Tuesday (March 20).

The Foxes are Born

The Fresno Football Club debuted Saturday night in front of 7,750 fans at Chukchansi Park and a festive atmosphere in the surrounding neighborhoods.
Fans packed the Tioga-Sequoia beer garden on Inyo Street, across the street from the stadium for pre-game festivities. Then, a tradition carried over from the amateur Fresno Fuego soccer club continued. A large gathering of fans, known as the Fresno Fire Squad, marched with drums banging, flags waving and smoke bombs waffling in the air into the stadium.

Politicos Turn Out for Foxes

As the Foxes and Lights warmed up, another Valley athlete made history. 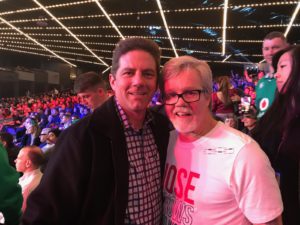 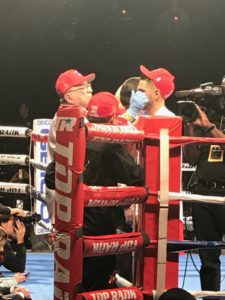 Prior to the bout, Ramirez wore a Fresno Grizzlies jersey. After the victory, Ramirez donned a Foxes top, and later the hat of one of his local sponsors, Deli Delicious.
Ramirez, who was born in Avenal and is a former Fresno State student, is the third world champion boxer from the Fresno area. He joined Young Corbett III, who won the world welterweight title in 1933, and Hector Lizarraga, who claimed the IBF world featherweight title in 1997.

The intersection of Browning Avenue and Fresno Street is first in line for a new traffic signal. That is the latest report the Fresno City Council will receive Thursday (March 22).
Public Works lists 65 traffic signals and 17 left-turn signals, ranked in order of importance. According to the report, the signal budget is $1.75 million for the year. That’s the most funding since 2007, or before the recession.
The approximate total price for everything on the wish list: $34 million.

Fresno’s transportation department said it slipped up when putting a motor oil contract out for bid. Instead of asking for one year’s worth, the city requested three years’ worth. Needless to say, all the bids came in high. The department is asking the council to reject all bids for a do-over at this week’s meeting.

How is Your Brain Wired? To Say 'Yes' to Opioids.