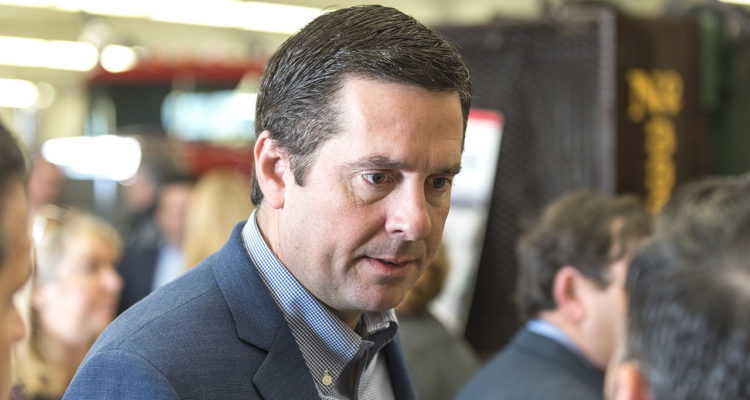 Rep. Devin Nunes has stopped talking to some media outlets. He barely tolerates other news organization, answering their questions while branding them “left-wing” rags.
Now it appears that the Tulare Republican might have to reserve some of his venom for unabashedly conservative media sites, too.
A column appeared today on RedState.com under the headline “‘It’s Time For Devin Nunes To Go — For Good.”

The Nunes Effort to Tarnish the FBI

Nunes, of course, is chairman of the House Intelligence Committee and the architect of the “Nunes memo” that accused the FBI and Department of Justice of abusing its power in obtaining a FISA surveillance warrant for Carter Page, a member of Donald Trump’s 2016 campaign team. That memo is central to the Republican argument that the FBI is biased against now President Trump.
The Times story goes on to say:
“Senator Richard M. Burr of North Carolina, the committee’s Republican chairman, and Senator Mark Warner of Virginia, the top Democrat, were so perturbed by the leak that they demanded a rare meeting with Speaker Paul D. Ryan last month to inform him of their findings. They used the meeting with Mr. Ryan to raise broader concerns about the direction of the House Intelligence Committee under its chairman, Representative Devin Nunes of California, the officials said.

“To the senators, who are overseeing what is effectively the last bipartisan investigation on Capitol Hill into Russia’s interference in the 2016 election, the leak was a serious breach of protocol and a partisan attack by one intelligence committee against the other.”

“Were this a Democrat, Republicans would be calling for that Democrat’s head. It is not a Democrat, however. It is a Republican and one whose values are increasingly in line with whatever Trump feels at a particular moment.” — RedState.com’s Joe Cunningham

In other words, Nunes is a leaker. He can’t be trusted. He is so blind in his allegiance to Trump that he has abdicated his duties as a lawmaker and the people’s representative in CA-22.

Or, as Cunningham writes it, “The idea that either intelligence committee would breach security protocol and take part in partisan attacks is a major problem, and it makes it clear that there is one person responsible for the breakdown of the integrity of the committee: Devin Nunes.”

Cunningham doesn’t end it there. Not even close.

“Were this a Democrat, Republicans would be calling for that Democrat’s head,” he writes. “It is not a Democrat, however. It is a Republican and one whose values are increasingly in line with whatever Trump feels at a particular moment.”

Because this story involves Washington, D.C., politics, there are complications, of course.

Please note that after the Times printed its story, Burr told CNN that the Senate panel had not determined that the leaks came from House Republicans. Burr also denied raising concerns about Nunes during his meeting with Ryan.

What was the response from the Nunes camp?

Instead, Langer shot the messenger: “The New York Times, a prominent purveyor of leaks, is highlighting anonymous sources leaking information that accuses Republicans of leaking information. I’m not sure if this coverage could possibly get more absurd.”

Leaked Texts Made Their Way to Fox News

But the leaks did happen. And they were the basis for a Fox News story last month based on texts between Warner and lobbyist Adam Waldman, whose firm is said to have connections to former Democratic presidential nominee Hillary Clinton.

Wow! -Senator Mark Warner got caught having extensive contact with a lobbyist for a Russian oligarch. Warner did not want a “paper trail” on a “private” meeting (in London) he requested with Steele of fraudulent Dossier fame. All tied into Crooked Hillary.

What You Need to Know About RedState.com

For those unfamiliar with RedState, here’s how the dot.com describes itself:
“Today, RedState is the most widely read right of center site on Capitol Hill, is highly respected and cited in the media, and has rapidly become one of the most influential voices of the grassroots on the right.
“We have three goals … 1)  Educate conservatives 2) Motivate conservatives to get involved in the political process 3) Activate conservatives through RedState’s support and goals.
“RedState does not stand athwart history yelling stop. We yell ‘ready,’ ‘aim’ and ‘fire,’ too.”
Cunningham concludes his piece with this: “Paul Ryan, House Republicans, and Republicans everywhere must demand Nunes step down. It is the only way to try to restore some modicum of respect to a committee that deals with some of the most sensitive of information.”
And so the chorus of Nunes critics grows. It’s not just left-wing, talking-points regurgitators calling for his head anymore. Some on the right have tired of his act, too.

Did Tax Reform Put More Money in Your Paycheck?