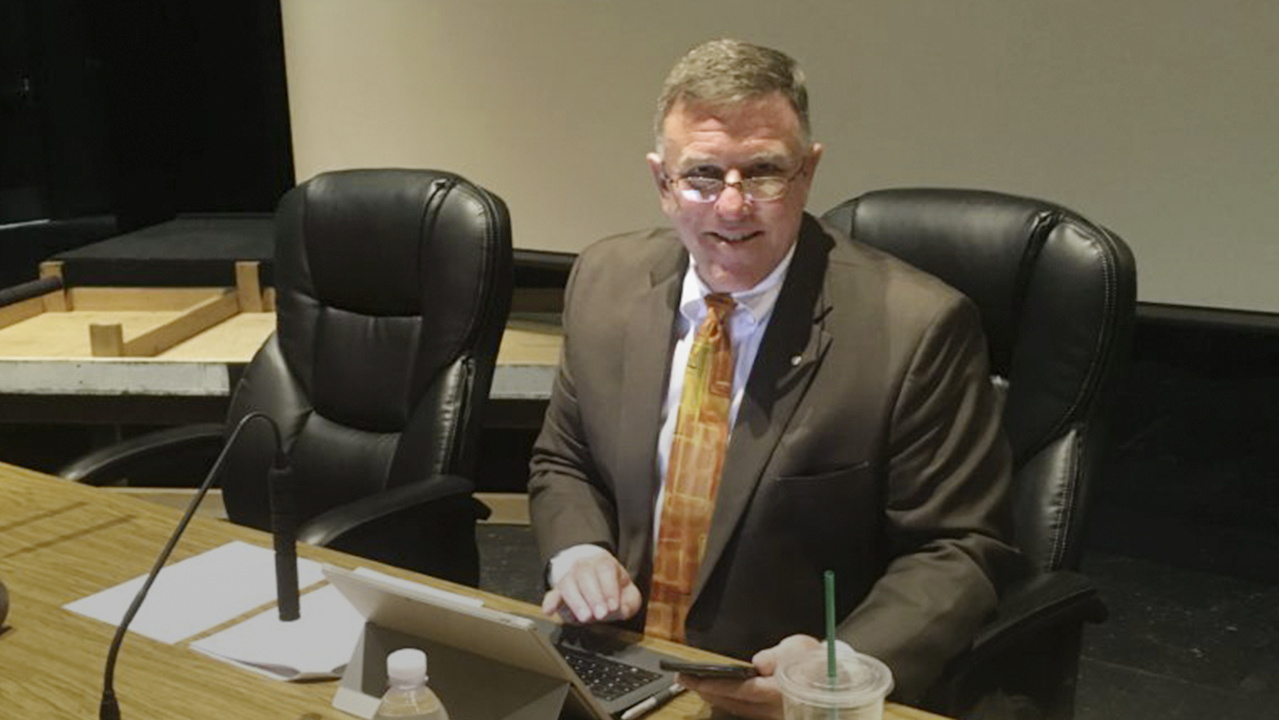 Central High School experienced the polarity of emotions on campus Tuesday (Feb. 27) night. At the gym, the boys’ basketball team experienced a thrilling playoff victory over Sunnyside.
About an hour before that final buzzer, anger and sadness cast upon the auditorium on the other side of campus. The school board fired Superintendent Mark Sutton.
When the Central trustees announced their decision following a closed session, Sutton’s seat on the dais was empty. He sat there earlier in the meeting and his absence was a spoiler when board president Cesar Granda announced the board’s 4-3 decision to terminate Sutton.
Before the trustees repaired to closed session, they heard public comment. Many parents and students lauded Sutton for being there: sporting events, academic meetings, FFA gatherings. And, maybe for one last time, Sutton demonstrated the accuracy of that praise.
With his back along the wall and face in his cell phone, Sutton blended into the gym to watch the Grizzlies in their basketball battle. Not many in the crowd realized he was there. Probably even fewer realized he was no longer the superintendent.

Lead-Up to the Vote

On the July 25, 2017, board meeting, the board gave Sutton a “satisfactory evaluation” according to the district’s minutes. Sutton’s name then appeared on the closed session agenda on Sept. 12, Oct. 24, Nov. 14, Dec. 12 and Jan. 9 — all with no action taken.
At the December meeting, a parent and teacher, Bernice Bailey, first broached the subject of Sutton’s contract during public comment. She praised him and felt he deserved a raise.
More supporters started to speak in favor of Sutton at subsequent meetings.
At Tuesday’s meeting, most of the parents and teachers cited Sutton’s positive leadership.

The Moment of Truth

While the board met in closed session, Sutton remained in the auditorium kibitzing with the community. He expressed to GV Wire his desire to remain as superintendent, but conceded it was not his decision. He disappeared when the board returned.
After Granda announced the 4-3 vote for termination, most of the parents exited the meeting, choosing to vent outside. They vowed to either vote the board members out of office or opt for a recall.
The vote tally:
Voting in favor of the termination: Granda, Ruben Coronado, Rama Dawar and Richard Solis.
Voting against: Cox, Phillip Cervantes and Richard Atkins.

Why did this happen? Answers were in short supply. Granda did not get into specifics, citing privacy laws about closed-session items. He danced around most inquiries in a five-minute session with the media.
When asked how a superintendent who received a positive performance review got fired, Granda said, “Things happen.”
The terms of Granda, Coronado, Atkins and Dawar end at the close of the year. They are eligible to run again.

Central Unified Teachers Association President Judee Martinez said her group remained neutral on Sutton.
“It’s not our responsibility as an association. It is the board’s responsibility,” Martinez said.
She expressed that she was just as surprised as anyone over the board’s decision.
“Our relationship (with Sutton) has been all business. It has been very positive. He was the first superintendent we invited to one of our association meetings,” Martinez said.
The union is wrapping up a survey of members on how they felt about Sutton. Martinez said the questionnaire finishes today. But, at the meeting, union member Tina Tompkins leaked results: Of the 392 teachers surveyed, 68% endorsed renewal.
[Clarification, 3/02/18: CUTA High School at-large representative and executive board member Tom Burkart tells GV Wire, the survey results weren’t leaked per se, it was just a miscommunication of when they could be released. Burkart helped conduct the survey among teachers. He also says the way the survey was conducted, 268* teachers expressly endorsed Sutton out of the 804 who received the survey. *In the original clarification, the number was erroneously reported as 168.]

Sutton’s predecessor, the semi-retired Mike Berg, is just as shocked as the rest of the community.
“I don’t have an immediate reaction other than surprise. There was no indication of stress in the district. Mark is a good man,” Berg told GV Wire. “I am at the same loss as others in the community are.”
Berg said he is not interested in returning to Central. He recently served as an interim superintendent for the Parlier district after retiring from Central in 2015.

The board will hold a special meeting next Tuesday to hire an interim superintendent.
Sutton will be paid through the June 30th expiration of his contract. His base salary for this school year is $201,571 (see contract here).

It's Virtually Impossible To Be Fired From a Federal Job