There Are Lies. There Are Damned Lies. And There Is This Janz Campaign Tweet. 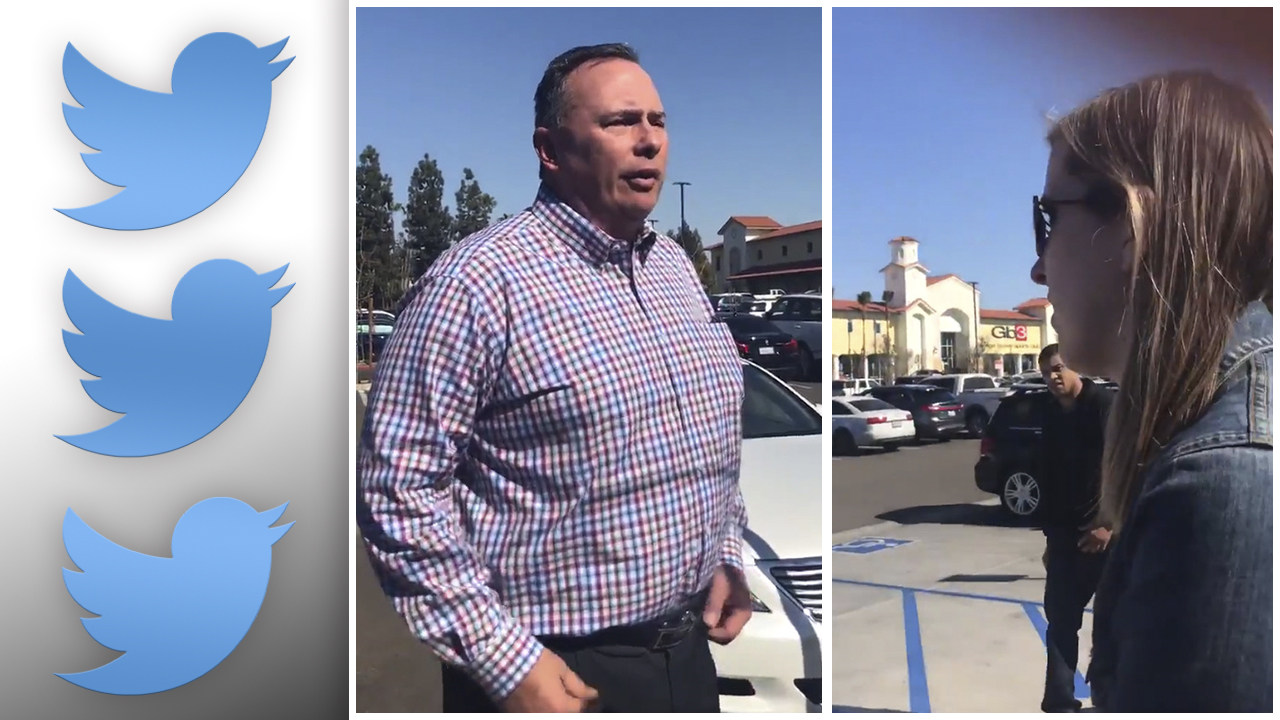 Followers of the Twitter account for Andrew Janz’s campaign would think his campaign manager got into a knock-down, drag-out shouting match with a prominent Devin Nunes supporter.

But the reality failed to live up to the hype. Not only was the Democratic challenger for the 22nd congressional district not there, he doesn’t even write or review all of his own tweets.
It happened after the Republican incumbent Nunes met donors Wednesday (Feb. 21) for a luncheon at Vino Grille & Spirits, a north Fresno restaurant. Approximately 10 protesters also attended, encouraged by Janz after he leaked the location, which organizers tried to keep hush-hush.

.@DevinNunes supporter coming out of $2700/plate fundraiser for Nunes – getting in the face of peaceful protestors and @JanzforCongress campaign manager. 😡 pic.twitter.com/zIXfjmqKLo

Janz’s campaign account (@JanzforCongress) posted the obligatory video (above) of Nunes leaving the event without acknowledging some of his most ardent fans.
Then, the account re-tweeted a video of a prominent Nunes supporter and Valley conservative, Michael Der Manouel Jr., engaged in a civil conversation with his campaign manager, Heather Greven, as he left the event.
Der Manouel operates a successful insurance business and hosts a daily conservative commentary segment on KMJ radio.
“This is just weird. These people are strange. Why are you videotaping people? I decided to have a conversation with them. It was all kind of sarcastic,” Der Manouel told GV Wire on Thursday.
On the video, Der Manouel can be heard saying, off-camera: “You guys filming people? I’m totally available. Right here. Come on, let’s do it.”
Der Manouel, somewhat snarky, then says that he got his $2,700 worth out of the fundraiser.
“I want you guys to raise and spend $5 to $10 million, please.”
Greven retorts: “I’ll do my best. I can’t wait to see Devin (Nunes) have to spend his $4 (million), love it.”
Back to Der Manouel: “I’ve been doing this since you’re in short pants, kid.  I really appreciate the work you’ve been putting in, but you’ve got no shot.”

Janz tweeted strong opinions about the conversation. Or, did he? His analysis of the video borders on the absurd: “This Nunes supporter came out & got in the face of my #fierce #fighter of a Campaign Manager, called her kid and inched closer to her with every word. She stood her ground which is more than Nunes can say after he ran from the cameras after lunch.”

This Nunes supporter came out & got in the face of my #fierce #fighter of a Campaign Manager, called her kid and inched closer to her with every word. She stood her ground which is more than Nunes can say after he ran from the cameras after lunch. #WomenLead #Proudofmyteam https://t.co/YrSekBeLIP

Inch closer with every word? The video doesn’t show that. Stood her ground? Der Manouel wasn’t invading her “ground.”
“I wouldn’t classify it as negative or a heated conservative. I did not feel physically threatened. He was a low talker,” Greven told GV Wire on Thursday.
Der Manouel heaped praise on Greven.
“She was cool. A lot of people wouldn’t know what to say. She was right there,” he said.

I asked Janz for comment Thursday. He said it wasn’t his tweet and he wasn’t at the Nunes event.
“I’m not the only one who has access to the account. I have to take a look at them,” he said.
Greven says multiple campaign staffers have access to the Twitter account and they have an internal process of what gets posted. As to the Der Manouel video, she said all but the initial conversation made its way into the 45 seconds that was posted.
Janz praised Greven in another tweet: “She is a strong #LGBTQ woman who is the brains behind my operation. I don’t just support #women and the #LGBTQ community, I hire them and promote them into leadership roles. She stood her ground today and made us proud.”

This is my campaign manager. She is a strong #LGBTQ woman who is the brains behind my operation. I don’t just support #women and the #LGBTQcommunity , I hire them and promote them into leadership roles. She stood her ground today and made us proud. #TeamJanz pic.twitter.com/XsZzNCvszH

Nearly 200 replies followed the Der Manouel video.
Twitter is the medium for non-stop insult, where knowing what you’re talking about is not a prerequisite to posting.
The use of loaded words in tweets describing the conversation fanned the flames, eliciting many unflattering comments about Der Manouel regarding his personal and professional life. Many tweets couldn’t get past Der Manouel adjusting his pants at one point in the video.
“I didn’t even notice his pants. We were eye to eye,” Greven said.
In retrospect, Der Manouel admitted that he looked ridiculous.
“They attack you for your appearance. They say things about you with no information. They write unflattering reviews of your business just because they disagree with you politically,” Der Manouel said. “We are seeing a 15-month tantrum by radical leftists. I decided to answer every single comment. Ninety-five percent of the people don’t even live near the congressional district.”

Why Is There Scant Research on Guns in America? Your Questions Answered.