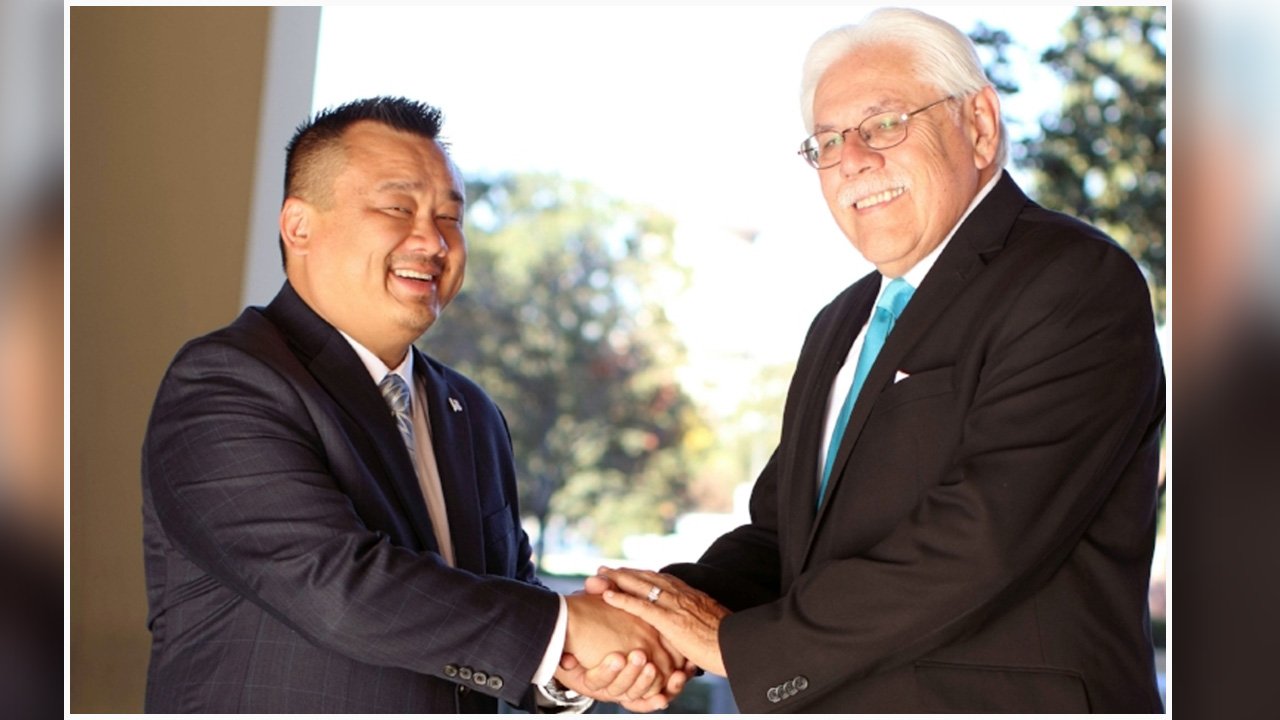 A campaign consultant for a Valley congressional hopeful admitted Thursday morning that he erred by having a county supervisor write an endorsement letter on government letterhead.
Fresno County Supervisor Sal Quintero wrote a letter endorsing Bobby Bliatout, ahead of a Democratic Party meeting for the purpose of endorsing candidates. The letter appears to be on Quintero’s official county letterhead.
Such a letter could run afoul of state and local rules.
“We made a mistake. I apologize to the supervisor. We should have caught that. It was my responsibility. There is no excuse. We own it,” said William Schlitz, Bliatout’s campaign consultant with the firm Centaur Strategies.
County officials are also determining if any rules violations occurred.
“We are looking into the matter,” Jordan Scott, the county’s public information officer tells GV Wire.
Letter in Question 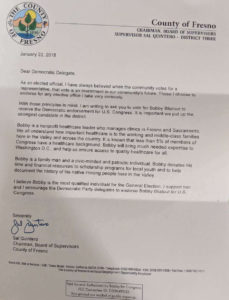 The letter, dated Jan. 22, was written on behalf of a congressional candidate. Bobby Bliatout is running for the District 22 seat occupied by Republican Devin Nunes of Visalia.
“I believe Bobby is the most qualified individual for the General Election. I support him and I encourage the Democratic Party delegates to endorse Bobby Bliatout of U.S. Congress,” Quintero wrote. He addressed the letter to “Dear Democratic Delegates.”
The letter has the Fresno County seal in the upper left, with Quintero’s letterhead in the upper right. At the bottom are the address and phone number for Quintero’s county office. A disclosure box is below that. It identifies that the letter is “paid for and authorized by Bobby for Congress … Not printed nor mailed at public expense.”
Quintero didn’t have much to say when asked by GV Wire.
“Talk to our county counsel,” was his only response.
GV Wire called Fresno County Counsel Daniel Cederborg, but did not receive a response by time of publication.
Bliatout said using the letterhead was an idea from his campaign team, and used for identification purposes.
“The county letterhead was to show who he was, not that it was an endorsement from the county. There should have been a footnote that it wasn’t from the county,” Bliatout said.
Bliatout said he did not know that making an endorsement on letterhead could violate state and local regulations.

The state agency regulating campaign mailers specifically says no political letter should be mass mailed at public expense.
While sources told GV Wire that a complaint to the Fair Political Practices Commission is forthcoming, the agency said this week it had not received anything.
Even if the letter is a replica of county letterhead, it could be the unauthorized use of the logo. Two county management directives indicate that the logo may be used for official county business. However, requests to use the logo for non-county business must be submitted in writing and approved by county administrators.
Scott said there is some ambiguity over whether those directives also apply to the Board of Supervisors.  The next step would be between the board and counsel.
“If that’s true, that’s a thoughtless thing (Quintero) did. I don’t think he did it with intent, but it’s bad if he did something like that,” said Supervisor Buddy Mendes, a Republican who supports Devin Nunes.

Bliatout is one of three Democrats in the race who has raised money. The others are Fresno County Deputy District Attorney Andrew Janz, and Fresno businessman Ricardo Franco.
The California Democratic Party held regional pre-endorsement meetings around the state Jan. 27. The party voted to endorse Janz.

Janz Gets Media Attention, But Nunes Rakes in the Big Donations