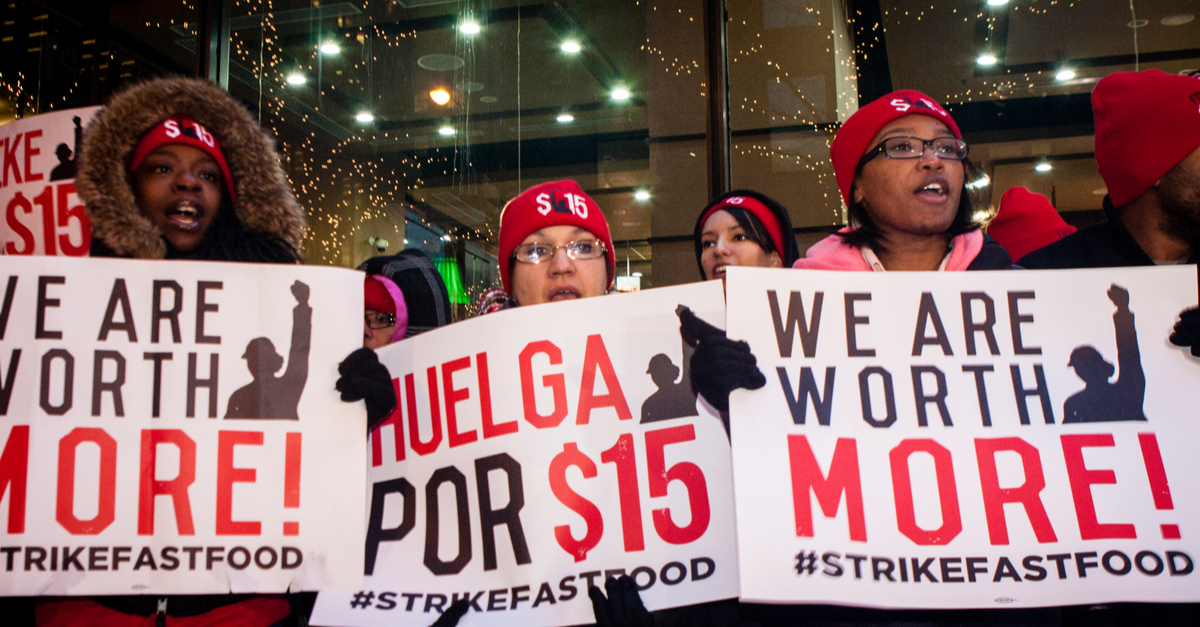 By Connor D. Wolf
InsideSources.com
The Fight for $15 is one of America’s most influential political movements, but the campaign has faced recent setbacks.
One of the most significant challenges are doubts about whether the policy actually helps lower income workers. Fight for $15 is simultaneously confronting an unfriendly presidential administration and a reduction in funding.
The Service Employees International Union has been the primary financial backer of the movement. But the union has reportedly been reverting funds towards election efforts. Bloomberg reported in December 2016 that the union planned to reduce funds by 30 percent going into the new year. The SEIU did not respond to a request for comment when asked by InsideSources.
The Employment Policies Institute, a conservative research nonprofit, found in a report Aug. 10 that the movement had significantly reduced its advocacy efforts since funds were cut. The Fight for $15 has organized roughly 300 fewer protests since last year. The Washington Free Beacon responded to the report by declaring that the movement has faltered.
“I think you have those three things working in tandem,” EPI managing director Michael Saltsman told InsideSources. “Less money, a less favorable environment politically, and bad evidence. It comes together to create a pretty substantial slowdown, I think, in momentum for the Fight for $15.”
The Fight for $15 is also at risk of losing favor with federal agencies as a result of the last presidential election. Former President Barack Obama oversaw an administration that supported the Fight for $15. President Trump has already begun appointing agency leaders who seem less sympathetic to the movement.

Fight for $15 faces Democratic Resistance in Some Areas

Democrats and progressives typically support the $15 minimum wage as a way to address poverty. They argue the policy will help low wage workers with few economic consequences. Democrats aren’t all jumping on the minimum wage train, however, with some lawmakers showing hesitance over the past year.
Baltimore Mayor Catherine Pugh vetoed a bill to raise the city’s minimum wage to $15 an hour. Pugh came to oppose the policy after doing some research into it. She expressed concern over the potential economic harm that it might cause.
Maryland Democrat Isiah Leggett, executive of Montgomery County, also vetoed a separate $15 minimum wage bill. He opted to wait for an objective study to determine how the increase would impact his county. Public Financial Management, a financial advisory firm, answered the call for an objective study. The Washington Post editorial board called the results sobering.
“Earlier this year the movement suffered an initial setback when the Democratic county executive Ike Leggett in Montgomery County vetoed a $15 minimum wage bill there,” Saltsman said. “Ike basically said if we are going to raise this thing I want to see an economic impact study on it.”

The PFM study found the increased minimum wage would cause a severe loss in jobs across the county. The county is estimated to lose almost 47,000 jobs by 2022. Total income is estimated to drop by $396.5 million over that time because of job losses and reduced hours.
“The findings were pretty stark,” Saltsman said. “So in total, you have more money lost than gained. Very similar to what we saw in Seattle. You can’t imagine a worse outcome for a policy designed to raise workers’ income then these people getting less money.”
Montgomery County isn’t the only place that found a $15 minimum wage could actually do harm. Researchers at Harvard Business School released a working paper April 11 which looked at the impact the increase is having in San Francisco. The report found restaurants are at increased risk of closing.
The University of Washington ignited the minimum wage debate June 26 when it found the increase could hurt workers in Seattle. The city was the first place in the country to pass the increase June 2014. The Seattle City Council commissioned the university to review the policy as it gradually gets phased in.
Seattle is scheduled to reach $15 an hour at the start of 2018. The city is now at $13.50 an hour. The study found workers are having their hours reduced at a rate that exceeds the increased wages. The study seemingly confirmed what critics had been warning.
The Fight for $15 and other supporters were quick to denounce the findings. The Economic Policy Institute countered in its own study that the negative analysis had data and methodological problems. Seattle Mayor Ed Murray denounced the study for excluding workers at multisite businesses like fast-food chains.
The University of California, Berkeley, released a report a week prior which found the citywide increase helped to increase wages while having little impact on employment. Fox News obtained emails June 29 which allegedly reveal the university released its study after a request from the mayor’s office. The university has ignored multiple requests to address the matter by InsideSources.
“What the emails show is a team of researchers who are willing to coordinate, hand and glove, to assist and advocate for the Fight for $15,” EPI’s Saltsman said. “Even having press releases that are written by the same PR team that the Fight for $15 uses.”

Fight for $15’s Most Recent Victories

The Fight for $15 has plenty of victories that could fuel continued success in the years ahead. Many cities across the country are still on course to reach the $15 minimum wage over the next few years. Minneapolis approved the policy June 30.
“I think Minneapolis is more the exception than the trend right now,” Saltsman said. “They’re limited in the number of places they can expand. Folks try to do things at the ballot box. They introduced a ballot initiative (last week) in Massachusetts.”
Massachusetts Democrats are hoping their state will be the next to enact the increase.
“The $15 minimum wage has a lot of public support,” Democratic Senate President Stanley Rosenberg said. “A progressive coalition has pledged to take the issue to the ballot if the legislature and governor do not approve it this term. The process has already begun.”
Raise Up Massachusetts is a coalition of labor and community groups which has been fighting to enact the policy in the state. Coalition spokesman Andrew Farnitano expressed the same optimism when asked by InsideSources. He argues the increase has strong support and will help workers across the state.
The Boston Business Journal found 37 percent of state residents support the policy in a poll July 9. Massachusetts Republican Gov. Charlie Baker has cautioned against rushing to enact it.
Illinois Democrats are also fighting to enact the increase. Republican Gov. Bruce Rauner is likely to veto the policy since he has expressed opposition to it in the past. New York and California became the first states to pass the increase last year.
Missouri Republicans have worked to advance a bill that bans localities from enacting their own minimum wages. The bill would cause cities like St. Louis to reverse local minimum wages that have already been enacted.
The Fight for $15 did not respond to a request for comment.
Follow Connor on Twitter

Connor D. Wolf discovered his love for writing and politics at a young age while growing up in Connecticut. He eventually had the chance to pursue his passions when entering the world of journalism. Since that time he has covered labor policy, business and financial regulations.
Related Topics:Donald Trumpfast food workerslaborMinimum wageSeattleSEIUUC Berkeley
Up Next

Elon Musk's Rise is Tale of Brilliance, Disruption and Celebrity