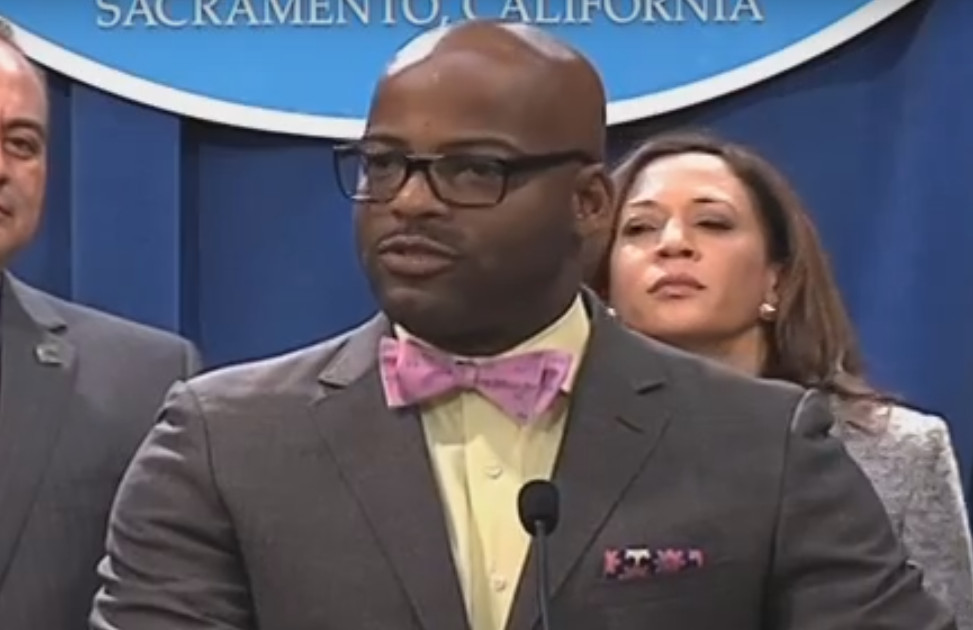 Neither allegations of cronyism nor accusations of ethical lapses deterred the Democrats in the state senate from confirming one of their former colleagues to the board of the Agricultural Labor Relations Board (ALRB). By a party line, 25-13 vote, Isadore Hall survived a contentious battle.

Ever since Governor Jerry Brown announced Hall’s appointment in January, a storm of protest swelled from Republican lawmakers and agriculture groups. One of the loudest was Sen. Andy Vidak (R-Hanford). He accused Hall of threatening a group of ag lobbyists at a hotel bar the night before a committee voted on Hall’s confirmation. According to Vidak, Hall said he would “get” farmers who opposed his ALRB appointment.

Hall is a former state legislator who ran for congress last year but lost. Some accuse Brown’s appointment of Hall to a $142,095 per year job of cronyism. Others challenged his qualifications based on the fact he represented an urban area (Compton), without any discernable agricultural or labor experience.

The ALRB serves as a quasi-judicial board to help settle disputes between farmers and labor. The board hears appeals of administrative judge rulings in labor matters.

Vidak asked both the Senate Rules Committee, which initially sent Hall’s name to the full senate floor by a 3-0 March 1 vote, and the Senate Ethics Committee to investigate. Neither did so.

During a 40 minute debate on Hall’s confirmation on the state senate floor Thursday (April 20), Vidak led the attack on Hall, supported by other Republicans. A number of Democrats came to Hall’s defense, led by Senate Pro-Tem Kevin de Leon (D-Los Angeles). It should be no surprise that the final vote was along party lines (two Democratic Senators, Josh Newman and Anthony Portantino did not vote). In total, 13 senators spoke during debate.

The Hanford senator led the attack on the floor, calling out Senate Pro-tem Kevin de Leon for his lack of action. “The Pro-tem has done zero, zilch, nada on this. It would appear that there are probably a few rules, a few laws, broken in this whole affair.”

Jim Nielsen (R-Roseville) and Joel Anderson (R-San Diego) also referred to Vidak’s allegations. Anderson went further: “this body already has a black cloud over it, having seen in my short time in the legislature three senators go to jail because of lack of ethics.” He is referring to the scandals of Leland Yee (D-San Francisco), Ronald Calderon (D-Montebello) and Roderick Wright (D-Inglewood) for separate and varying violations of the law.

Sen. Tom Berryhill (R-Stanislaus) said farmers in his district are concerned about Hall’s perceived bias. Berryhill cited Hall marching with the United Farm Workers (UFW), and the UFW’s labor strife with Gerawan Farming. “His public opposition to my constituents represents the same bias against farmers and farm workers that has been promoted by this board for the past several years.”

Sen. John Moorlach (R-Costa Mesa) said he enjoyed working with Hall, but noted that Hall would be earning more than senators. “I’ve looked up the word cronyism, and it says ‘the appointment of friends and associates to the position of authority without proper regard to their qualifications.’ So, that is my reason, Mr. President, for opposing this appointment.”

Democrats on the floor had kinder things to say. Sen. Toni Atkins (D-San Diego) supports her former colleague, saying he was properly vetted by the Senate Rules Committee. “I felt that most of the concerns with Senator Hall resulted from the lack of familiarity that people had with Senator Hall. It was for that reason that Senator de Leon announced his intention to hold the appointment on the senate floor to give Senator Hall an opportunity to reach out and meet with the farming community and to try and allay their concerns. And, I understand that he has followed through on that commitment.”

Sen. Ben Hueso (D-San Diego) praised Hall’s work ethic and called him highly qualified for the ALRB. “I’ve seen some of the attacks that have been waged upon Senator Hall in the media. And, I have to say with lots of disappointment in my community, that I have never seen comments and statements and a campaign waged against a person of this body that is more racially motivated than that. It is sad and disappointing.

Sen. Holly Mitchell (D-Los Angeles) dismissed Vidak’s allegations of Hall’s bar room threats. “I don’t know if any of us consider when whether or not we are going to vote or co-sponsor your bills, the actions and statements you make as adults out of the building on your own time; whether it is witnessed by colleagues or not.”

De Leon closed the debate, addressing points made by the Republicans. As for Vidak’s call for an investigation, de Leon responded on the floor, “it is not a practice to review or investigate barroom conversations.”  De Leon said he understood Vidak is representing his constituents.

He also was defensive about the integrity of the senate itself. De Leon noted the high favorability ratings the senate has with California.

In response to Anderson’s concerns of a “black cloud” over the senate, de Leon said he was “very, very troubled.” He also called any comparison of past misdeeds to Hall unfair. “To conflate the past of three former senators with Senator Isadore Hall…is very troubling to me.”

With Hall’s appointment confirmed, he will now serve a term that expires January 1, 2020.

After the hearing, Vidak released this statement to the media:

“The once thorough and extensive Senate confirmation process for appointees of the Governor has been corrupted,” said Senator Andy Vidak (R-Hanford).  “Isadore Hall is a classic case of someone who is completely unqualified, ill-suited and ethically challenged getting rubber-stamped rather than vetted.”

Numerous witnesses reported that on February 28, ALRB member Isadore Hall launched into an obscenity-laced tirade of threats in the lobby of the Sacramento Hyatt Hotel.  The targets of Hall’s threats were the President and three board members for the California Fresh Fruit Association (CFFA).  He said he would “get them” for opposing his confirmation.

Berryhill sent this e-mail to the media:

Senator Tom Berryhill, R-Stanislaus, on Thursday opposed a nomination to the Agricultural Labor Relations Board who previously waged war against a local farm and its 2,000 local farm workers.

Isadore Hall, a former Democratic state senator from Compton, was nominated by Governor Jerry Brown to the ALRB, despite having no agriculture experience – a recurring issue with ALRB appointees.

In addition to his lack of agricultural experience, Hall marched with the United Farmworkers Union as they opposed Gerawan Farms and their thousands of workers and has allegedly vowed retaliation against Gerawan.

“His public opposition to my constituents represents the same bias against farmers and farm workers that has been promoted by this Board over the past several years,” Berryhill said. “We cannot continue to have a Board comprised of members who have zero experience with Agriculture and believe their food comes from a grocery store.”

February 28: According to accusations by Sen. Andy Vidak, Hall goes on a profanity-laced tirade against members of the California Fresh Fruit Association at a Sacramento bar, vowing to “get” farmers who opposed him.

March 1: The Senate Rules Committee sends Hall’s name forward for a full confirmation by the senate floor, by a 3-0 vote.

March 24: Vidak announces he filed a complaint about de Leon not looking into Hall with the Senate Ethics Committee.