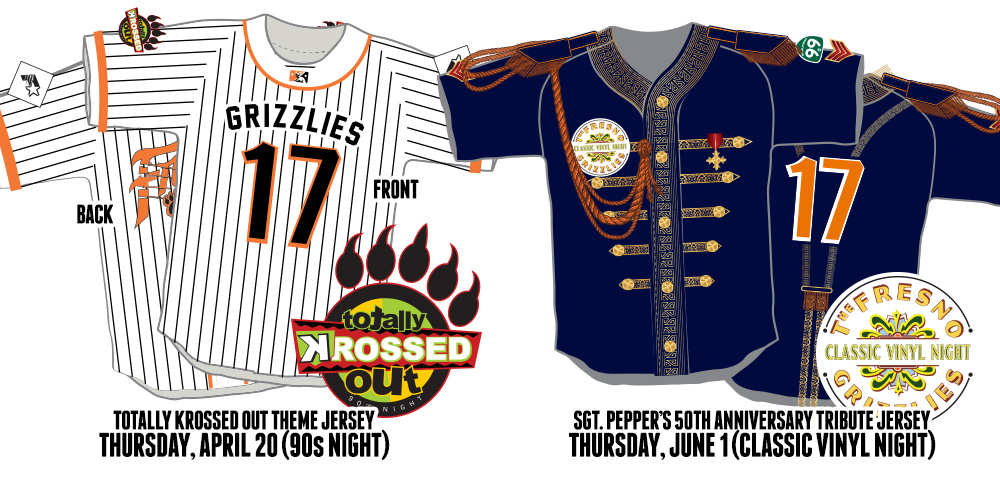 Opening day is a mere 37 days away for the Fresno Grizzlies. Today, they previewed some of the special uniforms they will be wearing.

On April 20, the team will wear “backwards” jerseys to honor 1990s teenage hip hop stars Kris Kross of “Jump” fame (“Mac Daddy will make you jump jump”).  The pinstriped tops feature the uniform number on the front and the team name and logo on the back, emulating the style of Kris Kross. The left sleeve will feature a Grizzlies paw styled patch saying “totally Krossed out” (with the backwards K). The right sleeve sees an F in the style of the old Starter brand logo.

The team will also honor the 50th anniversary of the release of “Sgt. Pepper’s Lonely Hearts Club Band” by The Beatles with a stylish blue uniform made out to look like what the Fab Four wore on their album cover. That event takes place June 1. The album, which some consider The Beatles greatest, was released June 1, 1967.

The team usually wears about 10 or so special uniforms a season, in addition to their white, black and Taco Tuesday schemes. While not announced as special uniform nights, don’t be surprised if the team wears a special something to go along with Star Wars Night (June 17), Eat My Shorts Night (a tribute to “The Simpsons” on June 29) and The Princess Ball (a Disney themed night on August 18).

On July 4, the team will combine a special Independence Day uniform to go along with Taco Tuesday. But, no pictures are out yet. 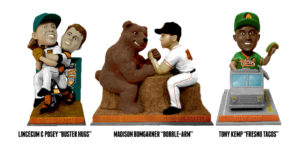 The Grizzlies are celebrating their 20th season. They were a San Francisco Giants affiliate from their inception in 1998 until 2014. Starting in 2015, they became a Houston Astros farm team. Opening night is April 6.