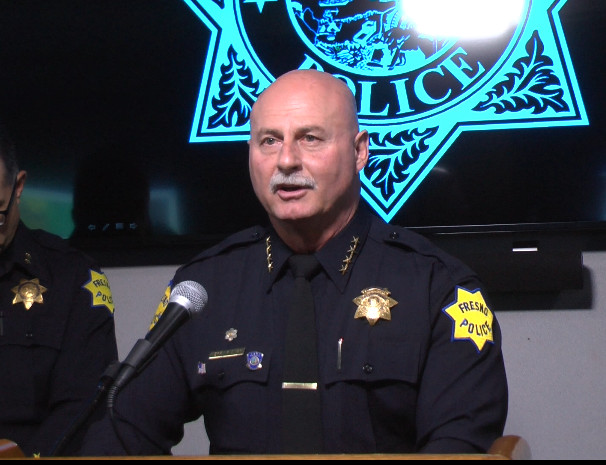 The actions of Fresno police officers in the shooting death of an unarmed man were justified Chief Jerry Dyer informed the media. However, Dyer says officers did not follow police procedures between the third and fourth shot and the final shot that ultimately killed Dylan Noble.

At a Friday news conference, Dyer said the two officers were justified in the June 25, 2016 officer-involved-shooting. “Following a thorough and objective investigation, a preponderance of evidence was established finding that the use of deadly force by the officers against Dylan Noble was objectively reasonable and within Fresno Police Department policy pursuant to the framework established by the US Supreme Court.“

The incident began with a report of a man walking around with a rifle in the area of Clinton & Fowler in East Central Fresno.  A truck was observed speeding through an intersection quickly, spinning its tires.

The officers attempted to pull over the truck, driven by the 19-year old Noble, eventually stopping at the Fast N Ezy/Chevron station at Shields & Armstrong. Previously released body cam video show the officers yell out dozens of commands for Noble to show his hands.

For reasons still unclear, Noble did not comply with the officers’ directives, often displaying just one hand at a time. According to Dyer, officers “reasonably believed that Dylan Noble was drawing a handgun from his rear waistband and that the officer was in danger of being shot.”

The first two of four shots sent Noble to the ground. Within four seconds, Noble rolled to his back. Three seconds later, Dyer says Noble reached under his shirt. “Believing that Noble was retrieving a handgun, the officers reasonably feared for their safety and the safety of numerous citizens who were standing nearby in the convenience store parking lot. It is at this time that the officer who fired the first two rounds fired a third round at Noble,” Dyer told the media.

Dyer said the officers violated department procedure by firing the final shot 14 seconds later. “I have determined that the officer who fired the fourth and final round did not use appropriate tactics in addressing the threat presented by Dylan Noble during the 14 second period between the third and fourth gunshots.  Although Dylan Noble still presented a threat during that period, the threat had diminished to the point where other potential alternatives could have been pursued by the officer before Noble deliberately reached under his clothing for the last time,” Dyer said.

As to whether there was any punishment for the two officers, Dyer cited a law (Penal Code 832.7) that prevents him from publicly disclosing any discipline. Dyer implied that the officers involved are still part of the police department. He mentioned that the officers will receive training, along with other police officers.

“I am disappointed in the fact that everything seems to point to trying to put the blame on Dylan Noble himself, and not accepting responsibility for the misconduct of the police department,” Chandler said.

He said police should have used less lethal methods, such as a K9, Tasers, pepper spray or a bean bag gun. “There was no discussion about what the police department had available for options to do something less than just shoot and wrongfully kill Dylan Noble.”

Chandler says that Nelson’s wrongful death lawsuit is currently in federal court. He was pleased to hear that further training will occur to prevent future tragedies.

Dyer said more training is needed on how to approach a wounded suspect. He also said they are researching how other departments deploy canines on suspects when it is unknown if they have a weapon.

GV Wire exclusive: Hanson on stepping down from FUSD