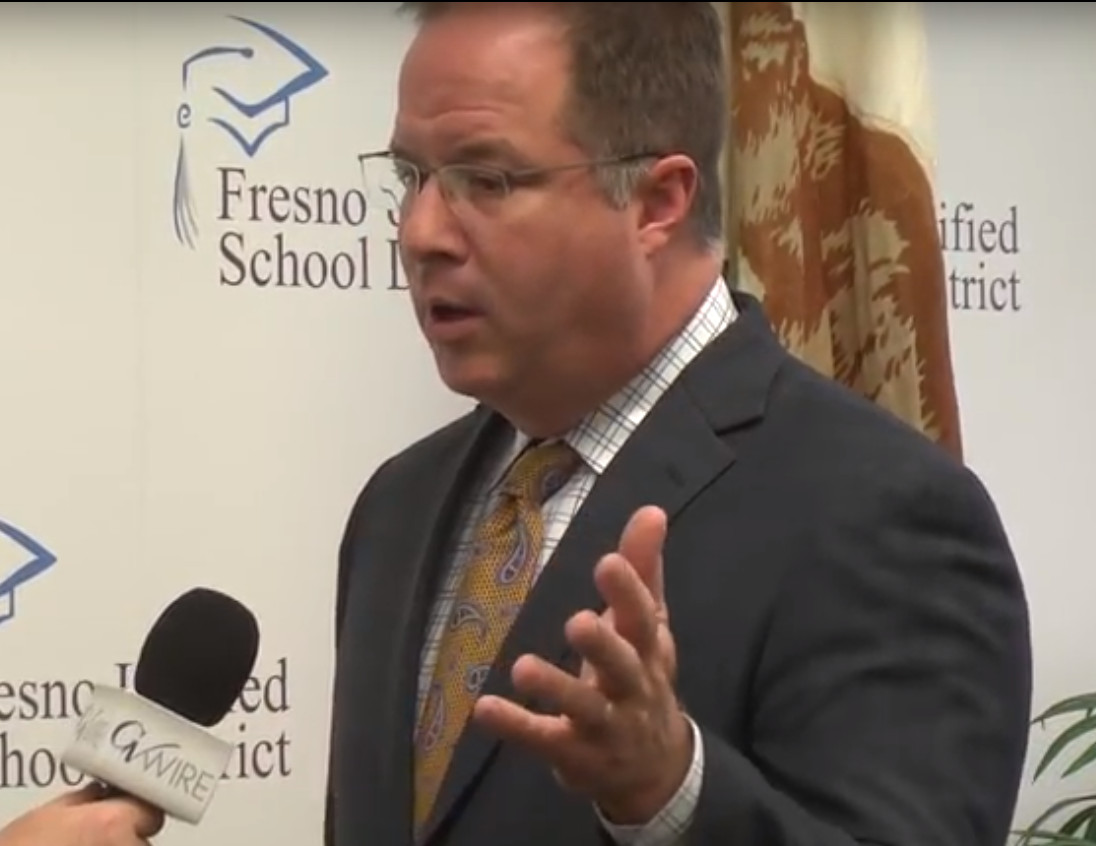 The bond would continue the $280 million Measure Q bond passed by 76% of voters in 2010. The district says that it Measure Q only funded one-third of the needed $1 billion in improvements around the district’s 100 schools.

Hanson spoke one-on-one with GV Wire to discuss his advocacy for passing the new bond measure. He feels the money is necessary to improve facilities on campus, which benefits all. He wants to improve air conditioning at multi-purpose rooms. Among schools slated to receive new classrooms include Bullard Talent, Columbia, King, Hidalgo, Homan, Leavenworth and Norseman. There are also plans to build a new school in the southeast.

The question is not without its detractors. A group called Schools Not Scams, led by board member Brooke Ashjian has railed against ‘X’, worried about its lack of transparency. Ashjian and his supporters point to a current FBI investigation into the bidding for Measure Q projects. It was only on October 12 that the school board approved the potential Measure X spending plan (which can be found here).

The heat between Ashjian and Michael Hanson has been simmering ever since Ashjian won election to the board in 2014. Ashjian has criticized Hanson and FUSD over the controversial “lease-lease back” methods of awarding construction contracts. The district points out some improprieties of Ashjian’s construction business (Seal Rite), which bid on a FUSD project in a possible conflict-of-interest scenario. Ashjian denied wrong doing and calls the criticism a political attack. Even in his GV Wire interview, Hanson took digs at Ashjian without naming him.

Some excerpts (Edited for length and clarity. The full video can be watched above):

Michael Hanson: It will allow us to continue the great work that voters approved 76% in 2010 with Measure Q. It was a $280 million bond that we were able to stretch to $300 million-plus with state matching funds. You can see all that great work all across the city, principally at every one of our comprehensive high schools, you’ll see signature projects. We’ve also done work at middle schools and elementary schools. We have removed to date 300 of our 1300 portables. Those old portable classrooms are out now, replaced by state-of-the-art classrooms. We are putting in new science labs and new theater arts buildings and things that are critical for student success.

What we have planned for this next bond is to move forward on what was identified in the master plan in 2008-09, a billion dollars worth of need. The reason we are coming for $225 million is that allows us to keep the tax rate the same, as some bonds are paid off, new debt comes on. It is important for our board that we do not increase taxes when we do bond and capital work in the district. We agree with that. We are being very conservative about it. This will allow us to get us halfway through the identified needs of the district capital projects.

What people will see is brand new, important learning space and teaching space all across the community that will impact every region of the district.

GV Wire: What is your response it the No on Measure X argument about lack of transparency?

Hanson: If anybody wanted to look about the transparency, go to our website and pull up the board meetings. They are shown on TV and the internet. As we talk about the bond, we do public communication about to our bond. It goes to the press, it goes to our union partners…We also do Building Futures publication. That goes out to 155,000 homes…Our board is very public. We are the only district around that publishes our cover sheet and back up materials, two weeks or more ahead of the meeting. It is very transparent….What we are proposing in Measure X is clearer and more descriptive than what we proposed in Measure Q.

GV Wire:  How would you address to the voters the transparency in the bidding process after the FBI investigation?

Hanson:  The only bidding issue we’ve had is one of our trustees submitting a bid with one of his companies on a modernization project at Fig Garden Elementary. We are trying to work through the legal issues with our legal counsel and our board. I’ll leave it at that. It’s complicated.

We do not have any bidding issues. The issue of lease-leaseback: there was an issue at the 5th Circuit (State Court of Appeal), a couple of other courts around the state have ruled differently. Laws are being changed, I believe. We are not using lease-leaseback as a delivery method right now, but other districts around here are. Reedley is doing it. We actually have a trustee who says we shouldn’t be using lease-leaseback. But his company is doing lease-leaseback in other districts. We are using a hard bid system right now, very transparent. It goes to the lowest bidder. We are very proud with Measure Q, that 90% of the money that came out stayed local with local companies. We think it’s a great design where local tax dollars are spent improving our schools, better teaching and learning spaces for our kids and our staff, improves the property value, and the money from our taxpayers that keeps the tax rate the same goes right back in the pockets of folks and local companies. That’s a great economic engine as far as we’re concerned. It does well for the community and kids get a better shot at life as a result.

GV Wire: What are the consequences if Measure X does not pass?

Hanson: Our building program would stop as soon as run out of Measure Q funds, which is in the very near future.  We would find ourselves stalled. And the students who need it the most are not going to get it.