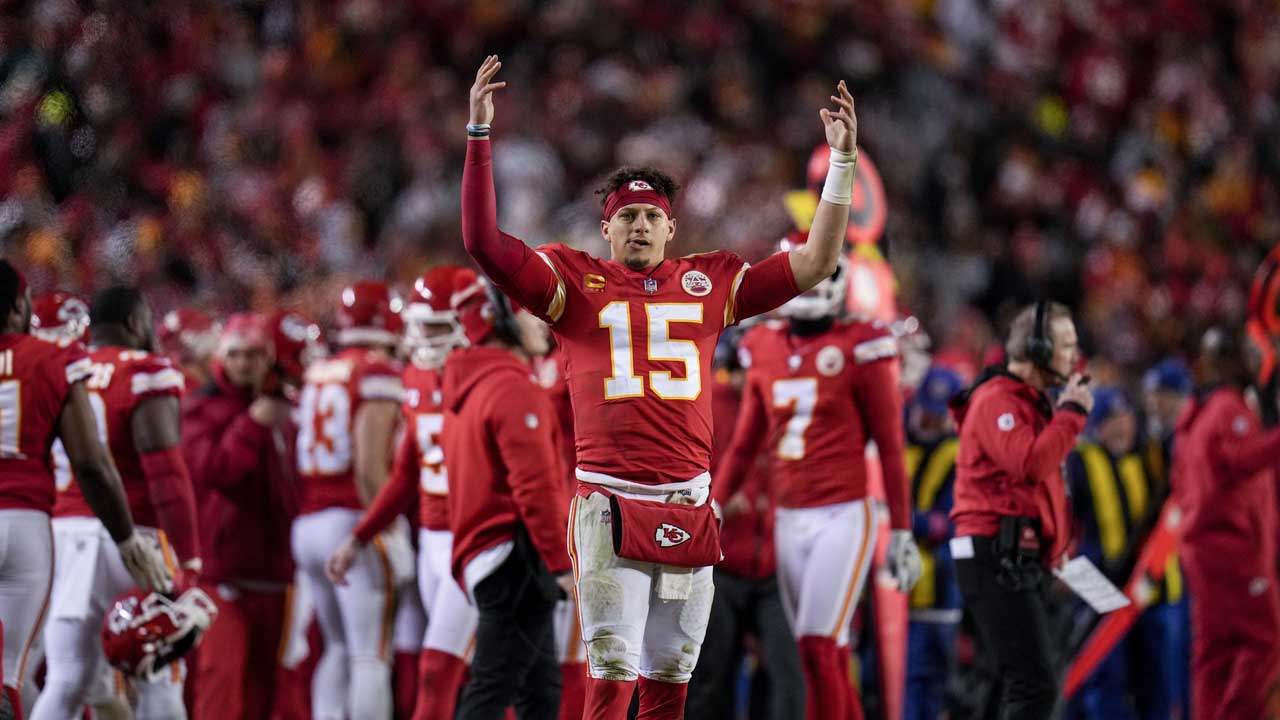 Quarterback Patrick Mahomes (15) cheers during the second half of the Kansas City Chiefs NFL divisional round playoff game against the Jacksonville Jaguars. (AP Photo/Jeff Roberson)
Share with friends

Patrick Mahomes will be the old man among the starting quarterbacks in the conference title games.

The 27-year-old All-Pro for Kansas City is the oldest member of one of the youngest groups of starting quarterbacks to make it to this round.

Getting to this stage isn’t new for Mahomes and Burrow. Mahomes has reached the AFC title game in all five seasons as a starter and can join Tom Brady as the only starting QBs to reach the Super Bowl three times in their first six seasons with a win on Sunday.

Burrow won his fifth playoff start last week against Buffalo, joining Russell Wilson (six) and Ben Roethlisberger (five) as the only QBs to win at least five starts in their first three seasons in the NFL.

While Burrow was the No. 1 pick in 2020 and Mahomes went 10th in 2017, Hurts and Purdy had more improbable journeys to this stage.

Hurts was picked in the second round in 2020 and Purdy went with the last pick in the 2022 draft. The winner on Sunday will join Colin Kaepernick, Russell Wilson, Nick Foles and Jimmy Garoppolo as the only ones of the 192 QBs taken after the first round in the draft since 2002 to get to the Super Bowl.

Purdy has already had a noteworthy run, joining Joe Flacco (2008) and Mark Sanchez (2009) as the only rookies to win two playoff starts. The only other rookies to get to the conference title game were Shaun King (1999) and Ben Roethlisberger (2004), who did it with one win after a bye.

Purdy is looking to become the first rookie to make it to the Super Bowl with those four others all losing. They had a combined 51.8 passer rating in the title games with nine interceptions, four TD passes and just 196.8 yards passing per game.

The Bengals and Chiefs will meet in the AFC title game for the second straight season, joining rare company for title game rematches.

In five of those six previous rematches, the team won the first meeting also won the second, with only Baltimore and New England splitting. The 1976 Raiders and 1994 49ers did win the trilogy game after losing the first two.

The 49ers and Bengals are headed into championship weekend on impressive streaks.

San Francisco has won 12 straight games and Cincinnati has won 10 in a row, joining 10 other teams that reached this round on a winning streak of at least 10 games.

The last team to do it was the 2007 Patriots, who won 17 straight before beating San Diego to make the Super Bowl. Their bid for perfection ended with a loss to the Giants.

Of the 10 previous teams to take winning streaks of at least 10 games into the championship game only two failed to make the Super Bowl: the 1976 and 2004 Steelers.

Kansas City coach Andy Reid reached some more milestones with his latest playoff win that gave him 10 with the Chiefs and 10 with Philadelphia.

Reid’s 20 total wins in the postseason are tied with Hall of Famer Tom Landry for the second most in NFL history, trailing only Bill Belichick with 31.

Reid has coached a team to the conference title game 10 times in the past 22 seasons, going from 2001-04 and in 2008 with Philadelphia and the last five seasons with Kansas City.

The only coaches with more conference title appearances in the Super Bowl era are Bill Belichick (13) and Landry (12).

Reid and the Chiefs also joined Belichick’s Patriots (2011-18) and John Madden’s Raiders (1973-77) as the only teams to get their five straight seasons.

Gould made all four field goal tries against Dallas on Sunday, as well as his one extra point attempt. That made Gould perfect on all 67 kicks he has tried in 15 postseason games for the 49ers, Giants and Chicago. He has made all 29 field goals and all 38 extra points.

The only other kicker in NFL history who is perfect in the postseason with at least 10 field goals is Brandon McManus, who is 10 for 10 on field goals and 3 for 3 on extra points.

Cowboys’ Last-Ditch Plays Against Niners Never Have a Prayer