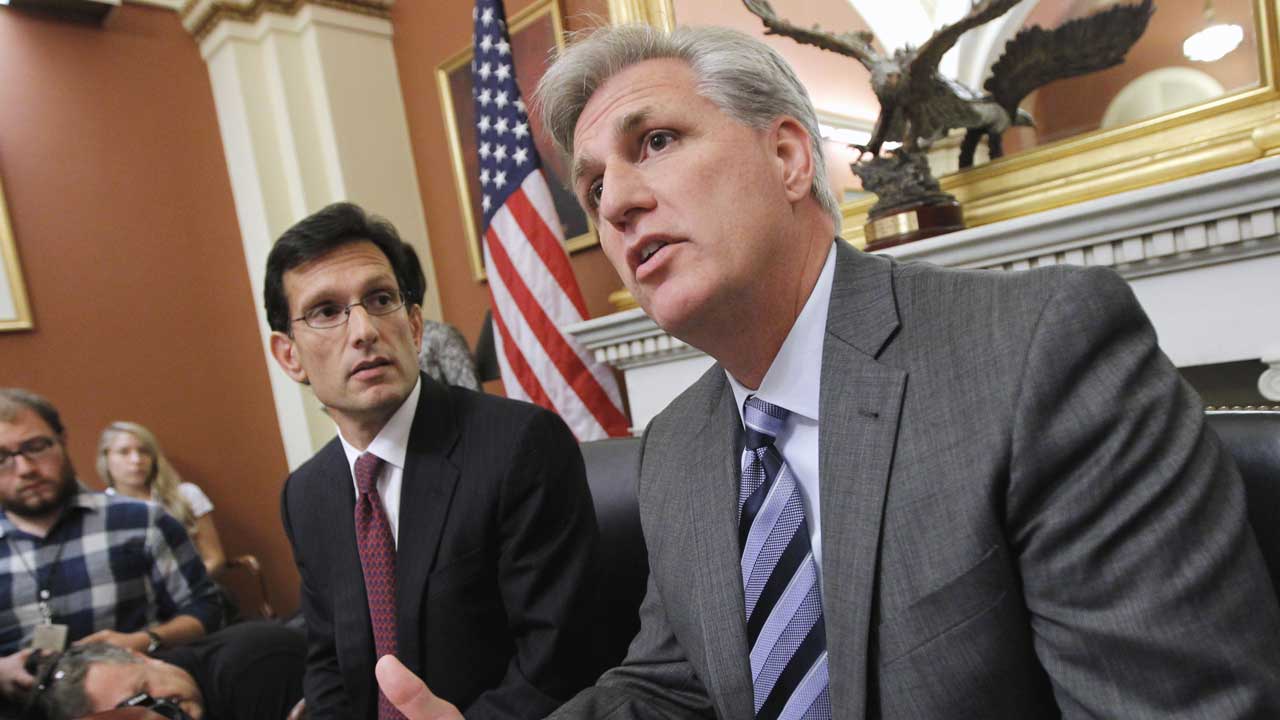 The debate around raising the debt ceiling sounds eerily similar: Newly elected House Republicans, eager to confront the Democratic president in the White House, refused to raise the debt limit without cuts to federal spending.

Negotiations over the debt ceiling consumed Washington in 2011, a high-stakes showdown between the Obama White House and the new generation of “tea party” House Republicans.

“Now we’re getting down to the real hard stuff: I’ll trade you my bicycle for your golf clubs,” the chief negotiator, Vice President Joe Biden, said at the time.

But weeks of tense talks between Biden and the House Republicans collapsed that summer, sending Washington careening toward a fiscal crisis. When Republicans in Congress refused to raise the debt ceiling, the government risked a catastrophic default and suffered a devastating credit downgrade, a first in the nation’s history.

Lessons learned from the debt ceiling standoff more than a decade ago are rippling through Washington, as the White House and Congress brace for another fiscal showdown — one that appears headed toward a very similar outcome. Neither Republicans nor Democrats are willing to budge.

“The whole debate is a façade,” said William Gale, a senior fellow at the nonpartisan Brookings Institution who wrote “Fiscal Therapy: Curing America’s Debt Addiction and Investing in the Future,” a book on the U.S. debt.

“That was the height of the ‘tea party’ stuff and they wanted to flex their muscles, but it’s just such a stupid way to try to do it — because you don’t really want to risk the good credit rating of the United States government,” Gale said. “I suspect most of these guys already knew it.”

The Treasury Department has notified Congress that it’s time to again raise the nation’s debt ceiling, now at $31 trillion, to allow more borrowing to pay off the country’s accumulated bills. Treasury said it has started taking “extraordinary measures” to keep paying the bills, but the money will run out by June.

Raising the nation’s debt ceiling had been a routine matter historically, a final task after Congress had authorized federal spending and appropriated the money needed to pay for the country’s various programs and services.

But that all changed when the Republican tea party came to town after the 2010 election.

Debt had doubled during the George W. Bush presidency and the post-9/11 wars overseas, and it skyrocketed under President Barack Obama in the aftermath of the Great Recession, teetering around $15 trillion.

At one point, Republicans were seeking $1-for-$1 tradeoffs — a dollar of spending cuts for every dollar of new borrowing. They also wanted a “cut, cap and balance” approach that would eventually curb deficits.

“We met for months,” Republican Eric Cantor, the former House majority leader tasked by Speaker John Boehner to negotiate with Biden, recalled in a recent interview with The Associated Press. “We all sat down. But this year, this time, President Biden is now refusing negotiate.”

In the end, House Republicans could not agree on a deal with the Obama White House.

When the August 2011 deadline came to raise the debt ceiling, only an eleventh-hour agreement with Senate Republicans led by Mitch McConnell and some Democrats tasking a “Super Committee” to recommend further federal reductions ensured there would be no debt default.

Spooked by the political crisis in Washington, the credit markets downgraded the nation’s credit ranking for the first time, upping the costs of future borrowing.

The Biden White House appears to have drawn the conclusion that it’s not worth negotiating with new House Speaker Kevin McCarthy, who won a slim GOP majority in last November’s midterm elections and who may — or may not — be able to deliver the votes on any debt ceiling deal.

She said Biden, a Democrat, has “always said he is happy to talk to anyone who wants to deal with that in a responsible way.”

“But preventing the default,” she said, “is a separate matter.”

Biden is scheduled to meet Tuesday with Democratic congressional leaders at the White House and is planning to invite McCarthy in the future.

McCarthy has been trying to push Biden to the table. “I think it’s arrogance to say, ‘Oh, we’re not going to negotiate anything,’” the speaker told the AP recently at the Capitol.

McCarthy has already shown how hard it will be to lead his majority — it took 15 ballots just to make him the House speaker in the face of resistance from right-flank Republicans.

To win over the holdouts, McCarthy promised his detractors he would fight to bring federal spending back to fiscal 2022 levels — an 8% reduction, or 17% if defense military spending is spared.

In pushing McCarthy to drive a hard bargain in debt talks, House Republicans may be taking a lesson from the tea party era that one way to force their leadership’s hand is to threaten his ouster if he caves.

During his campaign to become speaker, McCarthy also agreed to the hard-right demand to reinstate a House rule that allows a single lawmaker to file a “motion to vacate the chair,” essentially a House vote to oust the speaker.

Senate Majority Leader Chuck Schumer, D-N.Y., all but dared McCarthy on Monday to put the GOP’s proposed spending reductions on the table. “If Republicans are talking about draconian cuts, they have an obligation to show Americans what those cuts are, and let the public react,” he said.

But it’s not clear if the proposed fiscal 2022 spending cuts, or any, would win over McCarthy’s hard-right flank to raise the debt ceiling.

One major difference compared to 2011 is that “Republicans have not coalesced” around a unified position, said Rohit Kumar, who was an aide to McConnell during that showdown.

“At this point, I think it’s unclear what could get 218 Republican votes in conjunction with a debt limit increase, even just as an opening bid,” said Kumar, now an executive with the tax services firm PwC, referring to the tally of votes typically needed to pass House legislation.

McConnell again is expected to play a pivotal role in easing the debt ceiling standoff, and some have pointed to bipartisan Senate legislation that would review spending, much the way the failed Super Committee was tasked with finding cuts after the 2011 debt ceiling showdown.

Many House Republicans were not in Congress during the 2011 debt ceiling showdown. Said Rep. Bob Good, R-Va., one of the McCarthy holdouts: “I’m certainly not focused on what happened 10 years ago.”