City Hall Gets 10 Times as Many Calls on Potholes. What's the Repair Plan?

The recent onslaught of atmospheric rivers has made driving some Fresno streets a test in avoiding potholes.

Calls to City Hall about potholes on Fresno’s 1,767 miles of streets have increased 10 times after the punishing series of storms, city spokeswoman Sontaya Rose told GV Wire on Monday.

“Crews are working in all four quadrants of the city on pothole repairs with every clear day of weather,” Rose said via email in response to GV Wire’s questions.

“Repair and reconstruction of streets is a high priority in the adopted budget, which includes over 60 lane-miles of repaving, a $1.6 million investment in slurry seal for preventive maintenance, and $725,000 for the pothole program.”

At this point, it’s not known how many potholes need repair.

The ‘Pothells’ finally flattened me. Warning: west Shaw avenue near the 99 is a sinkhole. Be careful out there pic.twitter.com/OM69q3j5sw

But the best way for residents to ensure that the back-rattling, suspension-destroying, tire-flattening holes are filled is to report them via the FresGo app or by calling 311. The city’s 311 staff is available Monday through Friday, 8 a.m. to 5 p.m. Or you can click on this Create a Service Request link.

Rose also said that the time required to repair the potholes is unknown.

“Further storms would likely generate additional potholes and street repair needs, so the time frame to repair is weather dependent,” she said. “However, the city is pulling all available resources into the road repair efforts.”

In addition to filling potholes, the city will repair decaying pavement throughout the year. Rose said that Public Works is utilizing a report written to guide it after a consultant drove every Fresno street last year and analyzed road conditions. 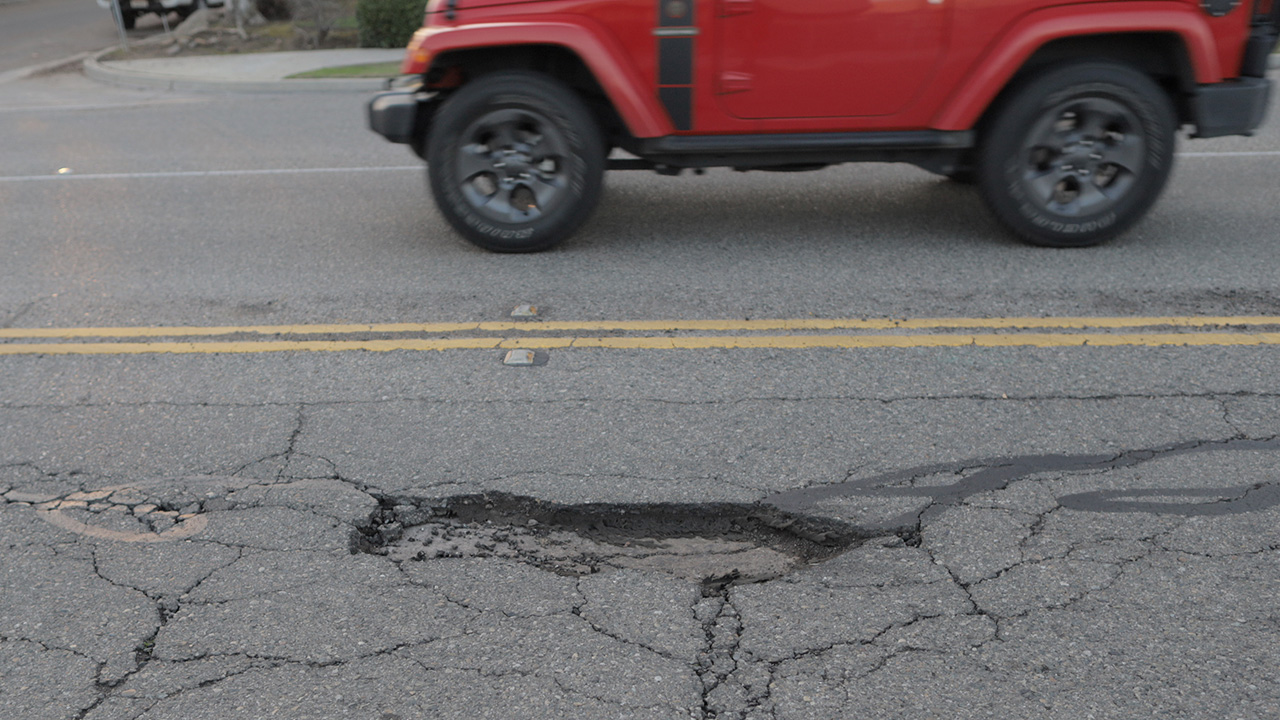 This pothole on North Fruit Avenue is at least half the length of a Jeep heading in the opposite direction on Friday, Jan. 20, 2023. (GV Wire/Johnny Soto)

Media Man: One Coming, One Going at ABC 30