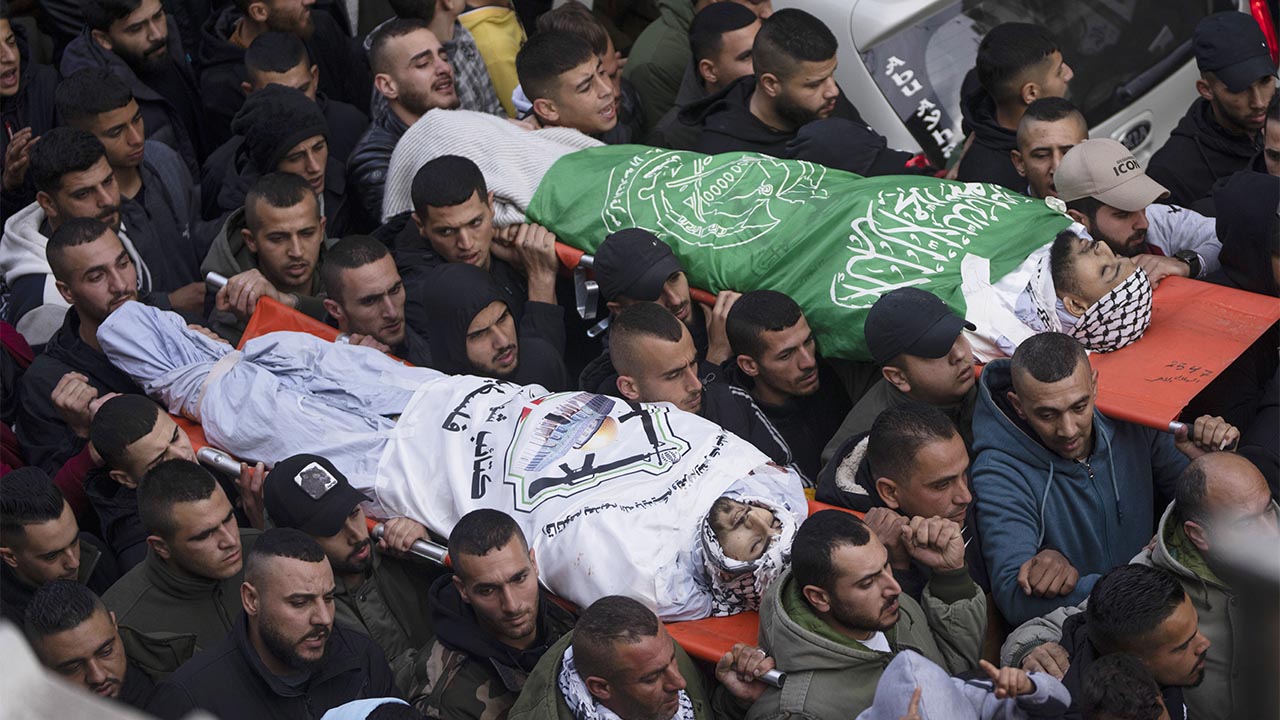 Mourners carry the bodies of Samer Houshiyeh, 21, left, and Fouad Abed, 25, during their funeral in the West Bank city of Jenin, Monday, Jan. 2, 2023. (AP/Nasser Nasser)
Share with friends

Israeli forces killed two Palestinians, including a man claimed by an armed group as a member, during a confrontation that erupted early Monday when troops entered a Palestinian village in the occupied West Bank, Palestinian health officials said.

The two men were killed in the village of Kafr Dan near the northern city of Jenin. The Israeli military said it entered Kafr Dan late Sunday to demolish the houses of two Palestinian gunmen who killed an Israeli soldier during a firefight in September. The military said troops came under heavy fire and fired back at the shooters.

It was the latest bloodshed in the region that has seen Israeli-Palestinian tensions surge for months. On Monday, the Israeli rights group B’Tselem said 2022 was the deadliest year for Palestinians since 2004, a period of intense violence that came during a Palestinian uprising.

The Palestinian Health Ministry identified those killed as Samer Houshiyeh, 21, and Fouad Abed, 25. Houshiyeh was shot several times in the chest, according to Samer Attiyeh, the director of the Ibn Sina Hosipital in Jenin. Attiyeh initially said Abed was 17, but the ministry later gave his age as 25.

An armed group, the Al Aqsa Martyrs’ Brigades, later claimed Houshiyeh as a member. The group, an offshoot of Palestinian President Mahmoud Abbas’ Fatah party, published an older photo in which Houshiyeh had posed with rifles. Video on social media showed his body wrapped with the armed group’s flag as his mother and other mourners bid farewell.

It was not immediately clear whether the second Palestinian killed was also affiliated with a militant group.

Israel says it demolishes the homes of militants as a way to deter potential attackers. Critics say the tactic amounts to collective punishment.

The Israeli military has been conducting near-daily raids into Palestinian cities and towns since a spate of Palestinian attacks against Israelis killed 19 last spring.

Nearly 150 Palestinians were killed by Israeli fire in the West Bank and east Jerusalem last year, according to B’Tselem’s figures, making 2022 the deadliest since 2004, when 197 Palestinians were killed. A fresh wave of attacks killed at least another nine Israelis in the fall. The Israeli army says most of the Palestinians killed have been militants. But stone-throwing youths protesting the incursions and others not involved in confrontations have also been killed.

Hamoked, an Israeli rights group, said that Israel is holding 866 Palestinians in administrative detention, a form of imprisonment without trial. That figure is up from around 500 a year ago, the organization said, the highest since 2003, during the peak of the last Palestinian uprising. It said that a total of 4,658 Palestinians are imprisoned by Israel on security related charges.

Israel says the raids are meant to dismantle militant networks and thwart future attacks. The Palestinians see them as further entrenchment of Israel’s 55-year, open-ended occupation of the West Bank.

Israel captured the West Bank, along with east Jerusalem and the Gaza Strip, in the 1967 Mideast war and the Palestinians seek those territories for a future state.

Related Topics:IsraeloccupationPalestineWest Bank
Up Next

McCarthy Fails in Marathon Bid for Speaker as House Adjourns