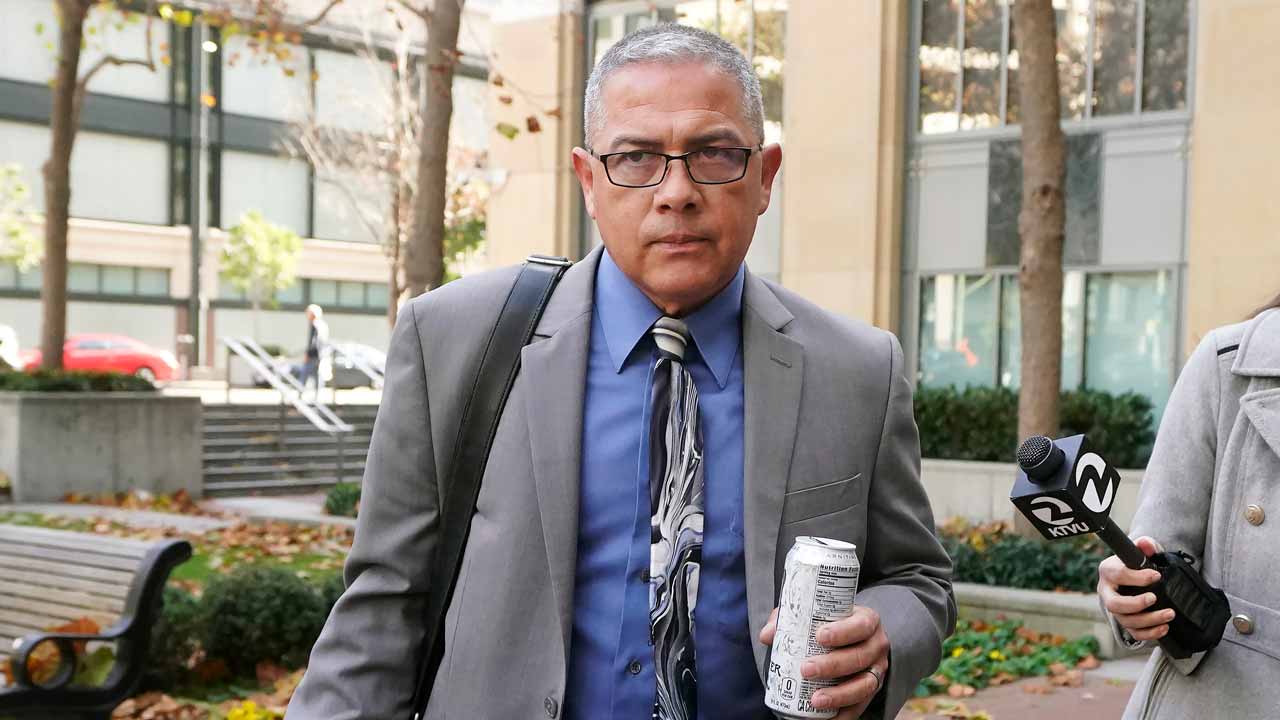 Ray Garcia is the former warden of an abuse-plagued federal women's prison known as the "rape club." (AP Photo/Jeff Chiu)
Share with friends

The former warden of a federal women’s prison in Northern California where inmates said they were subjected to rampant sexual abuse was convicted on Thursday of molesting inmates and forcing them to pose naked in their cells.

Ray Garcia was found guilty of all eight charges and faces up to 15 years in prison. He was among five workers charged with abusing inmates at the federal correctional institution in Dublin, California, and the first to go to trial. The abuse-plagued prison was known as the “rape club” by some.

Garcia, 55, retired from his post last year after the FBI found nude photos of inmates on his government-issued phone. Garcia was charged with abusing three inmates between December 2019 and July 2021.

Jurors deliberated over parts of three days following a week of testimony, including from several of Garcia’s accusers and the former warden himself.

“Instead of ensuring the proper functioning of FCI Dublin, he used his authority to sexually prey upon multiple female inmates under his control,” U.S. Attorney Stephanie Hinds said, calling Garcia’s crimes a betrayal of the public trust and his obligations as a warden.

Prosecutors argued at trial that Garcia’s abusive conduct followed a pattern that started with compliments, flattery and promises of transfers to lower security prisons, and escalated to sexual assault.

Testifying on his own behalf, Garcia conceded that he had made mistakes but claimed that some of his alleged wrongdoing — like taking pictures of naked inmates — was done as part of his official duties to document violations of prison policy. Prosecutors countered by calling a prison lieutenant who said he’s never seen a case where it was appropriate for an employee to take photos of a nude inmate.

An Associated Press investigation in February revealed a culture of abuse and cover-up that had persisted for years at the prison, about 21 miles east of Oakland. That reporting led to increased scrutiny from Congress and pledges from the federal Bureau of Prisons that it would fix problems and change the culture at the prison.

The trial has called into question the Bureau of Prisons’ handling of sexual abuse complaints from inmates against staff and the vetting process for the people it chooses to run its prisons.

All sexual activity between a prison worker and an inmate is illegal. Correctional employees enjoy substantial power over inmates, controlling every aspect of their lives from mealtime to lights out, and there is no scenario in which an inmate can give consent.

Garcia was in charge of staff and inmate training on reporting abuse and complying with the federal Prison Rape Elimination Act at the same time he was committing abuse, prosecutors say, and some inmates say they were sent to solitary confinement or other prisons for accusing employees of abuse.

Prosecutors say Garcia tried to keep his victims quiet with promises that he’d help them get early release. He allegedly told one victim he was “close friends” with the prison official responsible for investigating staff misconduct and couldn’t be fired. According to an indictment, he said he liked to cavort with inmates because, given their lack of power, they couldn’t “ruin him.”

Garcia was also accused of ordering inmates to strip naked for him as he made his rounds and of lying to federal agents who asked him if he had ever asked inmates to undress for him or had inappropriately touched a female inmate.

“We see inmates dressing and stuff … and if they’re undressing, I’ve already looked,” Garcia told the FBI in July 2021, according to court records. “I don’t, like, schedule a time like, ‘You be undressed, and I’ll be there.’”

Garcia was placed on administrative leave before retiring. He was arrested in September 2021.

Last month, Deputy Attorney General Lisa Monaco directed federal prosecutors across the U.S. to “consider the full array of statutes,” including the federal Violence Against Women Act in cases involving Bureau of Prisons employees who are accused of sexual misconduct.

In those cases, Monaco said prosecutors should consider asking judges for sentences that go beyond the federal guidelines if the sentence recommended in the guidelines isn’t “fair and proportional to the seriousness of the offenses.”

Of the four other Dublin workers charged with abusing inmates, three have pleaded guilty and one is scheduled to stand trial next year. James Theodore Highhouse, the prison’s chaplain, is appealing his seven-year prison sentence, arguing that it was excessive because it was more than double the recommended punishment in federal sentencing guidelines.