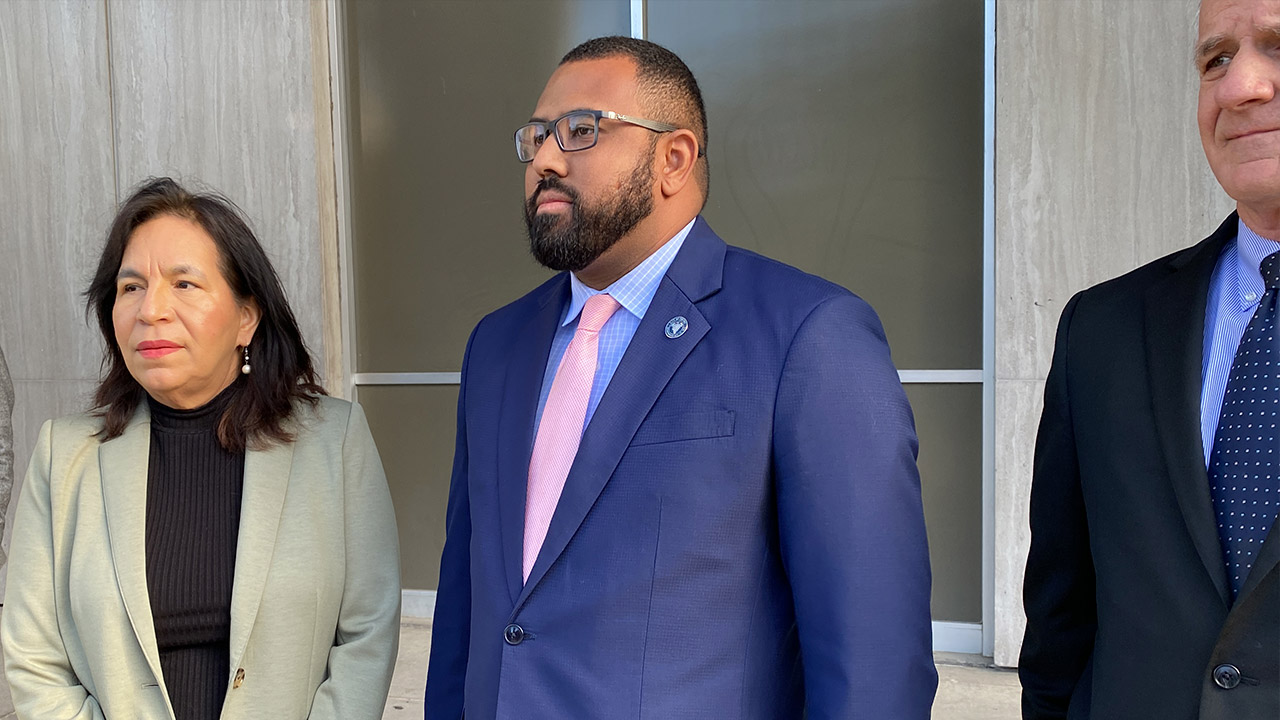 Esparza was accused of threatening Sloan’s job during an April 22 meeting. Esparza allegedly said that if Sloan did not “work for the council majority” he would lose his job.

Sloan had since moved on to the city attorney position in Santa Monica. During preliminary hearing testimony, Sloan said his negative interaction with Esparza prompted his move.

The District Attorney’s Office initially charged Esparza with a felony account of attempted extortion and a misdemeanor count of violating the city charter. If convicted, he could have faced up to a year in jail, and possible dismissal from the city council.

Esparza read a statement in the record at the start of Monday’s hearing in front of Judge Geoffrey Wilson. He said he and Sloan had a “candid conversation with him regarding his job” and a recent resolution not to “weaponize” the City Attorney’s Office on April 22.

“We spoke specifically about the new resolution and about my perception and anger with the fact that the City Attorney’s Office was being used to circumvent the will of the council majority after the majority had voted. I did, in fact, imply to Mr. Sloan that if this happens and that the new resolution was not followed, that I would vote to terminate him. I never directed him not to comply with his legal and ethical obligations. I wish that he would have come to me to clarify before these allegations became public. This entire situation could have been avoided.

“I had no idea that he had misinterpreted our conversation until May 13th, when his version of our conversation was made public. I understand these allegations had to be investigated by the District Attorney’s Office as they are obligated to ensure that the residents of the city of Fresno receive fair representations that comply with the law as well as the City Charter,” Esparza said.

This was Esparza’s first time in court detailing his side of the conversation. In a separate civil lawsuit, Esparza discussed his conversation with Sloan but never revealed that he mentioned firing him.

Prosecutor Victor Lai moved to dismiss the charges “in the interest of justice.”

A More Conciliatory Tone from Esparza

After the hearing, Esparza offered a more conciliatory tone toward the District Attorney’s office. He has publicly said before that his prosecution was politically motivated.

“I came into this process a free and innocent man, and am exiting this process the same way. The outcome of the dismissal this morning is what we had been hoping for. We appreciate the DA’s office and recognizing the circumstances of the case and moving forward with the dismissal,” Esparza said.

Esparza’s attorney, Mark Coleman, said that it was “a huge step” that a judge last month dropped the felony attempted extortion charge to a misdemeanor. Asked if he thought the case was politically motivated, Coleman said “I’m not going to get into that.”

Esparza thanked his friends and family, and attorneys. The public is funding Esparza’s legal defense. Coleman did not have an estimate on how much time he has spent on the case or what his final bill will be. The city will pay Coleman $350 an hour; other attorneys working on Esparza’s behalf will receive $250 an hour.

Fresno Mayor Jerry Dyer also weighed in on the dismissal.

“I know this issue has weighed heavily on Council President Esparza and his family,” Dyer said in a statement. “Now that charges have been dismissed, it is my hope that we will be able to move forward as we continue to serve our community.”

“Who are we electing? Are we electing mature, professional people or are we electing people who are self-centered and self-serving who then only participate in the process, you know, when the heat comes down? And I think that’s really what we have here today,” Smittcamp said.

Smittcamp said that the case was “tried in the media” and criticized leaks to the press.

Additionally, she clapped back at criticism that her office prosecutes based on political party or race.

“We make decisions in the District Attorney’s Office based on two things — facts and law. That’s it. And the only facts we can use are the facts that we know. And despite what many people specifically in the Fresno City Council have said about me publicly, which are complete lies, that we do things because of race or political party or affiliation. … I mean, it’s just complete hogwash,”  Smittcamp said.

She also praised the hiring of Andrew Janz as city attorney. Janz worked under Smittcamp as a criminal prosecutor.