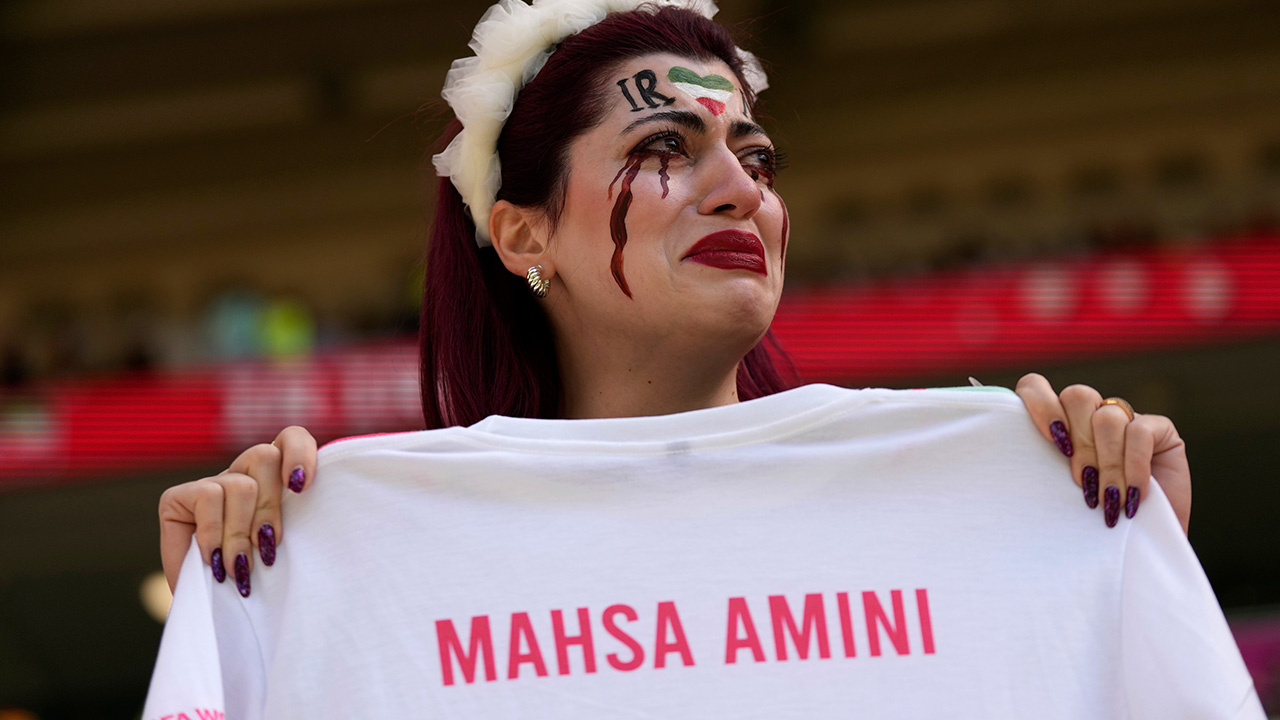 An Iran team supporter cries as she holds a shirt in memory of "Mahsa Amini" before the World Cup soccer match between Wales and Iran on Friday, Nov. 25, 2022. (AP/Alessandra Tarantino)
Share with friends

Iran’s government reacted by accusing America of removing the name of God from its national flag.

The USSF decision added yet-another political firestorm to the Middle East’s first World Cup, one organizers had hoped would be spared of off-the-field controversies.

It occurred as the U.S. prepared to face Iran in a decisive World Cup match already freighted by the decades of enmity between the countries and the nationwide protests challenging Tehran’s theocratic government.

The USSF said in a statement Sunday morning it decided to forego the official flag on social media accounts to show “support for the women in Iran fighting for basic human rights.”

The Twitter account of the U.S. men’s team displayed a banner with the squad’s matches in the group stage, with the Iranian flag only bearing its green, white and red colors. The same was seen in a post on its Facebook and Instagram accounts laying out the point totals so far in its group.

Related Story: How Did Qatar Land the World Cup? Start With $1B in Bribes

By Sunday afternoon, the normal flag with the emblem had been restored in the Twitter banner and the Facebook and Instagram posts with the altered flag had been removed.

“We wanted to show our support for the women in Iran with our graphic for 24 hours,” the federation said.

Federation spokesman Neil Buethe would not say whether the original decision had been cleared by USSF President Cindy Parlow Cone, a former national team player. Buethe said Parlow Cone was not available to discuss the matter.

“This was a decision within the federation,” he said. “I’m not going to get into who knew and who didn’t.”

Asked whether there had been discussions with diplomatic entities, Buethe said: “There have been at certain times. I’m not going to talk about those, but, again, this is our decision not anyone else’s or pressure from anyone else.”

The USSF displayed the official Iranian flag in a graphic showing Group B standings on its website. 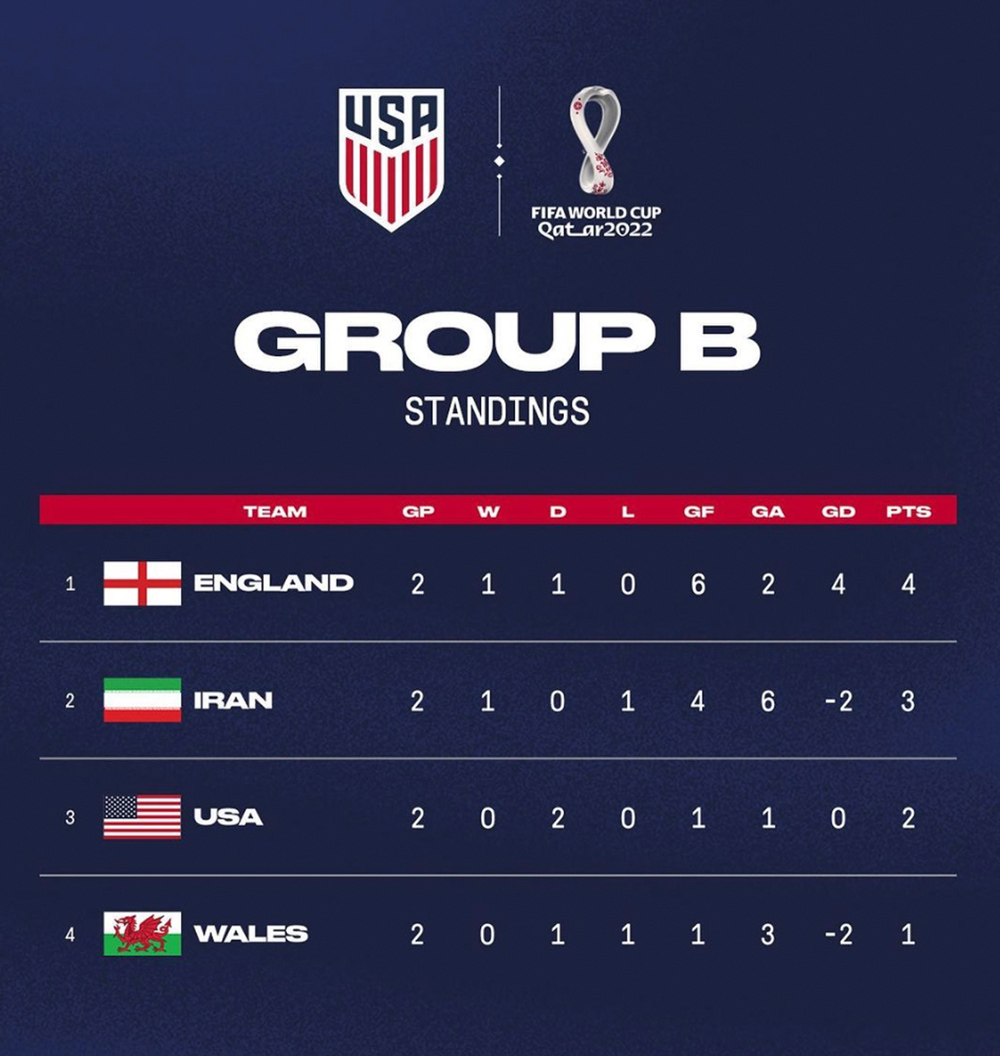 A U.S. soccer federation screenshot displaying Iran’s national flag on social media without the emblem of the Islamic Republic. The federation described the move as a show of support for protesters in Iran ahead of the two nations’ World Cup match Tuesday. The federation said in a statement Sunday that it decided to forego the official flag on social media accounts to show “support for the women in Iran fighting for basic human rights.” (Instagram/AP)

US Players Unaware of the Change

Defender Walker Zimmerman said the U.S. players were unaware of the posts.

“We didn’t know anything about the posts but we are supporters of women’s rights,” he said. “We’re focused a lot on Tuesday, on the sporting side, as well. … I think it’s such a focused group on the task but at the same time we empathize and we are firm believers in women’s rights and support them.”

The brief absence of the emblem came as monthslong demonstrations challenged Iran’s government following the Sept. 16 death of 22-year-old Mahsa Amini, who had been detained by the country’s morality police.

The protests have seen at least 450 people killed since they started, as well as over 18,000 arrested, according to Human Rights Activists in Iran, an advocacy group following the demonstrations.

Iran has not released casualty or arrest figures for months and alleges without providing evidence that the protests have been fomented by its enemies abroad, including the U.S.

Tehran also restricts media access and has detained over 63 reporters and photographers since the demonstrations began, according to the Committee to Protect Journalists, making covering the unrest that much more difficult.

Iran’s mission to the United Nations and its soccer federation did not respond to a request for comment from The Associated Press. As comments raged online, Iranian state television described the U.S. federation as “removing the symbol of Allah” from the Iranian flag.

Iran’s semiofficial ISNA news agency quoted Safiollah Fagahanpour, an adviser to the Iranian Football Federation, saying that the “measures taken regarding the Islamic Republic of Iran flag are against the law” of FIFA competitions.

“They must be held responsible,” Fagahanpour said. “Obviously they want to affect Iran’s performance against the U.S by doing this.”

About the Iranian Flag

The Islamic Republic emblem, designed in 1980, is four curves with a sword between them. It represents the Islamic saying: “There is no god but God.” It also resembles a tulip or lotus.

At the top and the bottom of the flag, there are 22 inscriptions of “God is Great” as well, which honors the date on the Persian calendar when the Islamic Revolution took hold.

The flag has become a point of contention at the World Cup. Apparent pro-government supporters have waved it, shouting at those demonstrating over Amini’s death. Others at matches have waved Iran’s lion and sun flag, an emblem of its former ruler, the late Shah Mohammad Reza Pahlavi.

More security forces could be seen at Iran’s last match against Wales. In the capital Tehran, anti-riot police — the same ones cracking down on protests — waved the Iranian flag after the Wales win, angering demonstrators.