In Milwaukee, Latinos Fed up With Crime Weigh GOP Appeal 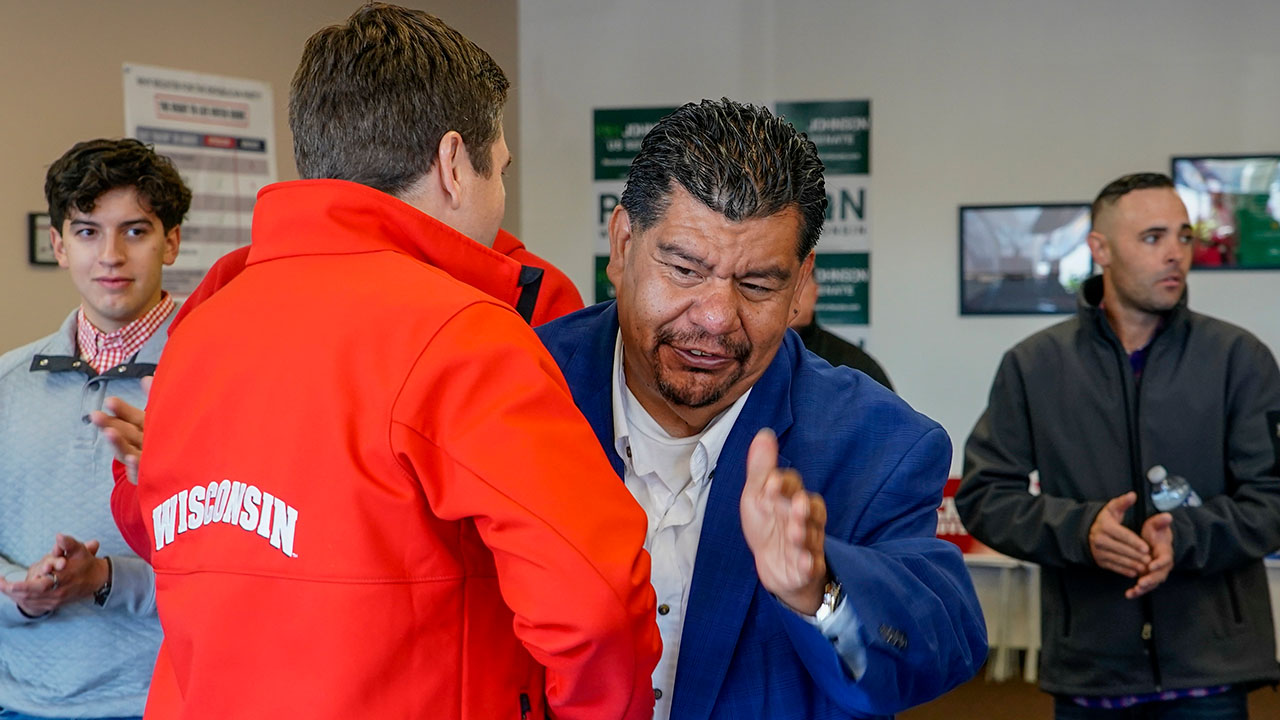 MILWAUKEE — In two decades of street outreach on Milwaukee’s south side, evangelical pastor Marty Calderon has offered Bible study, gang prevention, a safe place to stay for those battling addiction, and help getting jobs for those newly released from prison.

But as he’s watched rising crime threaten those efforts to “clean up” his impoverished neighborhood, Calderon started bringing Republican politicians to his ministry, God Touch.

He hopes the largely Hispanic, working-class community will hear what they can do for it — and the conservative candidates will learn these voters’ reality, especially their immigration journeys.

“We’ve never had the Republicans come as strong as they are. … I’m very cautious doing this because I just don’t want people thinking they’re going to come get a vote,” Calderon said in his sanctuary, adding that he doesn’t push specific candidates on his community. “I’m just saying go out and vote and pray about it.”

Republican candidates across the country are seeking to expand recent gains the party has made with Hispanic voters from Florida to the Rio Grande Valley to Los Angeles. What seems to be driving them are bread-and-butter issues that Calderon’s neighbors constantly mentioned to Associated Press reporters last week — rampant lawlessness, struggling schools, and food and gas prices creeping beyond their paychecks’ reach.

Those consistently matter more to Latino voters than immigration, allowing Republicans to make inroads that constitute a “big re-alignment” — if they end up splitting their vote close to 40% Republican and 60% Democratic instead of historically a third of Latinos voting with the right, said Geraldo Cadava, a Northwestern University history and Latino studies professor.

Swinging even a few thousand votes in a state like Wisconsin — which delivered minuscule margins for Trump in 2016 and for Biden in 2020 — could impact national politics because GOP Sen. Ron Johnson is in a close re-election race with Democratic challenger Lt. Gov. Mandela Barnes.

A month before the midterms, Johnson was talking about the importance of “renewed faith” as he met with Calderon and other community leaders in the Republican National Committee’s one-year-old Hispanic outreach center, two blocks from God Touch.

“We’re showing up,” Johnson said of the party’s outreach in communities like this. “We have a universal message.”

Minutes earlier, Republican U.S. Rep. Bryan Steil, whose southeastern Wisconsin district is just a few miles south, had also made a stop at the storefront center, decorated with yard signs, an elephant-shaped piñata, and U.S. and state flags.

These efforts encourage Hilario Deleon, 21, who grew up on the south side and, after losing his dishwashing job during the COVID-19 lockdown, got involved in Republican campaigning.

“We’ve failed in the past to be in the community,” he said of the GOP. He added that he likes to see political and faith leaders walking the walk, like Calderon’s weekly food distribution. “I like to see God through people’s actions.”

Wisconsin’s elections commission doesn’t collect race or ethnicity data, but the immigrant rights advocacy group Voces de la Frontera estimates there are about 180,000 voters among the state’s Hispanics, nearly 40% of whom live in Milwaukee. Most are of Mexican origin, followed by Puerto Ricans.

And 46% of Latino registered voters consider themselves independent, according to pollster Charles Franklin of Marquette University Law School. His aggregate polling data over the last two years shows that Wisconsin Latino voters fall about halfway between whites and Blacks on political issues — and 71% identify as Christian.

“Political parties can’t take this population for granted,” said Felipe Hinojosa, a professor at Texas A&M University who studies the connection between religion and politics among Latinos.

He finds the centrality of faith to many Hispanics’ daily life doesn’t automatically make them Republican but being an ethnic minority doesn’t reflexively make them Democratic, either.

Walking past taquerias and historic churches, founded by Central European immigrants and now attended largely by Mexican faithful, the canvassers stopped at modest, single-family homes, many with Halloween decorations but no campaign signs.

But “Latinos are switching over because of the lack of fulfilled promises,” she added, especially on immigration. Voces founding director, Christine Neumann-Ortiz, said she feared disenchanted Latinos might not vote at all.

“Folks on the ground hear, ‘No one ever reached out to us before’ or ‘I didn’t expect Republicans to reach out to us,’” said Ana Carbonell, a consultant for Hispanic outreach with the National Republican Senatorial Committee, which launched Vamos efforts this midterm season in nine key states, including Wisconsin.

In a late September poll by the Pew Research Center, more Latinos said they felt that the Democratic Party “works hard to earn Latinos’ vote” and “cares about Latinos” than the Republican Party.

The historic lack of outreach to the Latino community leaves Hispanic voters to “bundle” their own issues, often based on faith, instead of buying into an “ideological package” from either party, said Ali Valenzuela, an American University professor of Latino politics. That can benefit Republicans when the focus is on the economy, as in these midterms.

Since April, Vamos in Wisconsin has contacted more Hispanic voters there than over the last three election cycles combined — voters like the woman who chucklingly told two Vamos canvassers last week, “You’re in the wrong neighborhood.”

“I can always learn more,” she nevertheless added, taking their flyers.

Nearby, Artemio Martinez, a construction worker from Mexico married to a U.S. citizen, said he was grateful Vamos knocked on his door.

As his 2-year-old daughter played with the bilingual flyer listing Republican statewide candidates under “¡Equipo Ganador!” — the “winning team,” described first as “pro-faith” and “pro-family” — Martinez said he hadn’t planned on voting.

“But if the senator (Johnson) will do something about this,” he added, referring to the crime and drug use he sees all around the neighborhood, “We will bring our support and vote so that things can change in the community.”

Working on new siding for his white home, Noah Ledezma also said he wasn’t sure if he would vote. He supported Republicans in the past, because he feels the party is more aligned with his Christian faith and family values.

But now he believes that no matter who’s in office, life keeps getting harder for working class people like him — born of Mexican immigrants, the father of five works in construction while his wife is a schoolteacher.

The Vamos canvassers and their literature didn’t sway him. But what might is if Johnson showed up in person to take “open questions” on a crucial topic like education.

“It’s different when you see them out here,” Ledezma said. “Let’s say I ask … ‘Senator, what are you going to do that’s going to be different?’ … And you’re hearing it from the horse’s mouth … I can say, ‘I’m going to hold accountable. Okay, you have my vote.’”