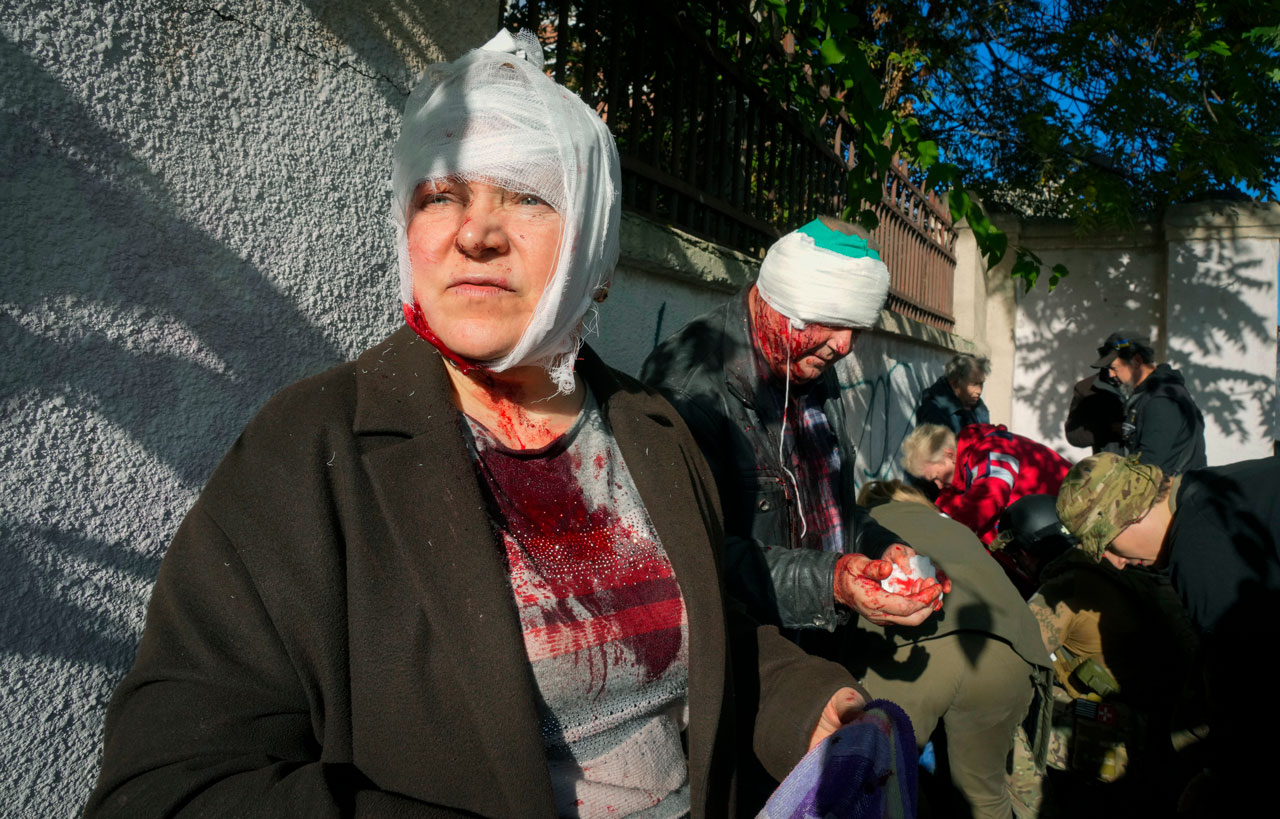 KYIV, Ukraine — Russia retaliated Monday for a weekend Ukrainian attack on a critical bridge by unleashing its biggest and most widespread attacks against Ukraine in months. The lethal barrage against multiple cities smashed civilian targets, knocking out power and water, shattering buildings and killing at least 14 people.

Ukraine’s Emergency Service said nearly 100 people were wounded in the morning rush hour attacks that Russia launched from the air, sea, and land against at least 14 regions, spanning from Lviv in the west to Kharkiv in the east. Many of the attacks occurred far from the war’s front lines.

Though Russia said missiles targeted military and energy facilities, some struck civilian areas while people were heading to work and school. One hit a playground in downtown Kyiv, and another struck a university.

The attacks plunged much of the country into a blackout, depriving hundreds of thousands of people of electricity into Monday night and creating a shortage so severe Ukrainian authorities announced they will stop power exports to Europe starting Tuesday. Power outages also often deprive residents of water, given the system’s reliance on electricity to run pumps and other equipment.

Andriy Yermak, a senior adviser to President Volodymyr Zelenskyy, said the strikes had no “practical military sense” and that Russia’s goal was to cause a “humanitarian catastrophe.”

Russian President Vladimir Putin said his forces used “precision weapons” to target key energy infrastructure and military command facilities in retaliation for what he claimed was Kyiv’s “terrorist” actions — a reference to Ukraine’s attempts to repel Moscow’s invasion, including an attack Saturday on a key bridge between Russia and the annexed Crimean Peninsula that Putin said was masterminded by Ukrainian special services.

Putin vowed a “tough” and “proportionate” response should Ukraine carry out further attacks that threaten Russia’s security. “No one should have any doubts about it,” he told Russia’s Security Council by video.

The Russian president has been under intense domestic pressure to take more aggressive action to stop a largely successful Ukrainian counteroffensive and to react forcefully to Saturday’s attack on the Kerch bridge, whose construction he used to cement his 2014 annexation of Crimea.

Putin’s increasingly frequent descriptions of Ukraine’s actions as terrorist could portend even more bold and draconian actions. But in Monday’s speech, Putin — whose partial troop mobilization order last month triggered an exodus of hundreds of thousands of men of fighting age — stopped short of escalating his “special military operation” to a counterterrorism campaign or martial law. Zelenskyy has repeatedly called on world leaders to declare Russia a terrorist state because of its attacks on civilians and alleged war crimes.

Moscow’s war in Ukraine is approaching its eight-month mark, and the Kremlin has been reeling from humiliating battlefield setbacks in areas of eastern Ukraine it is trying to annex.

The head of Ukraine’s law enforcement said Monday’s attacks damaged 70 infrastructure sites, of which 29 are critical. Zelenskyy said that of the 84 cruise missiles and 24 drones Russia fired, Ukrainian forces shot down 56.

Some of the strikes hit near the government quarter in the capital’s symbolic heart, where parliament and other major landmarks are located. A glass-covered office tower was significantly damaged, with most of its blue-tinted windows blown out.

Zelenskyy, in a video address, referred to the rush hour timing of Monday’s attacks, saying Russia “chose such a time and such targets on purpose to inflict the most damage.”

Zelenskyy’s wife, Olena, posted a video showing people sheltering on the stairs of a Kyiv subway station singing a Ukrainian folk song, “In a Cherry Garden,” whose final lines are: “My dear mother, you are old and I’m happy and young. I want to live, to love.”

While air raid sirens have continued throughout the war, in Kyiv and elsewhere many Ukrainians had been ignoring the warnings after months of calm.

Just as traffic was picking up Monday morning, a commuter minibus was struck near Kyiv National University. Nearby, at least one missile landed in Shevchenko Park, leaving a large hole near a children’s playground.

Another target was the Klitschko pedestrian bridge — a central Kyiv landmark with glass panels. Video footage showed a huge explosion under the bridge, with smoke rising, and a man running away, apparently unhurt. The mayor posted a video later while walking on the bridge, pointing out a crater on a sidewalk below and broken glass and missile fragments on the bridge surface.

Air raid sirens sounded in every region of Ukraine except Russia-annexed Crimea for four straight hours.

Associated Press journalists saw bodies at an industrial site on the outskirts of Dnipro. Four people were killed and 19 injured in the city, officials said. Witnesses said one missile landed in front of a bus during the morning rush hour, damaging the vehicle but not killing any passengers.

Natalia Nesterenko, a mathematician, saw one missile fly by her Dnipro apartment balcony as she was in her kitchen, then she heard two explosions.

“It’s very dangerous. I immediately called my kids to see how they are because anyone can be hit — women, children,” she said.

The Group of Seven industrial powers scheduled a video conference Tuesday on the situation, which Zelenskyy will address.

U.S. President Joe Biden said the missile attacks that killed civilians “again demonstrate the utter brutality of Mr. Putin’s illegal war on the Ukrainian people.” He said the United States and its allies will “continue to impose costs on Russia for its aggression, hold Putin and Russia accountable for its atrocities and war crimes, and provide the support necessary for Ukrainian forces to defend their country and their freedom.”

Some feared Monday’s attacks may mark the start of a new Russian offensive. As a precautionary measure, Ukraine switched all schools to online learning.

In an ominous move, Belarusian President Alexander Lukashenko announced Monday that he and Putin have agreed to create a joint “regional grouping of troops.” He offered no details.

Lukashenko repeated his claims that Ukraine is plotting an attack on Belarus, sparking fears he would take preemptive action. His defense minister, Viktor Khrenin, later issued a video warning Ukraine not to provoke Belarus but added: “We don’t want to fight.”

American Invests in Firm Aiming to Supply Hydrogen to Planes