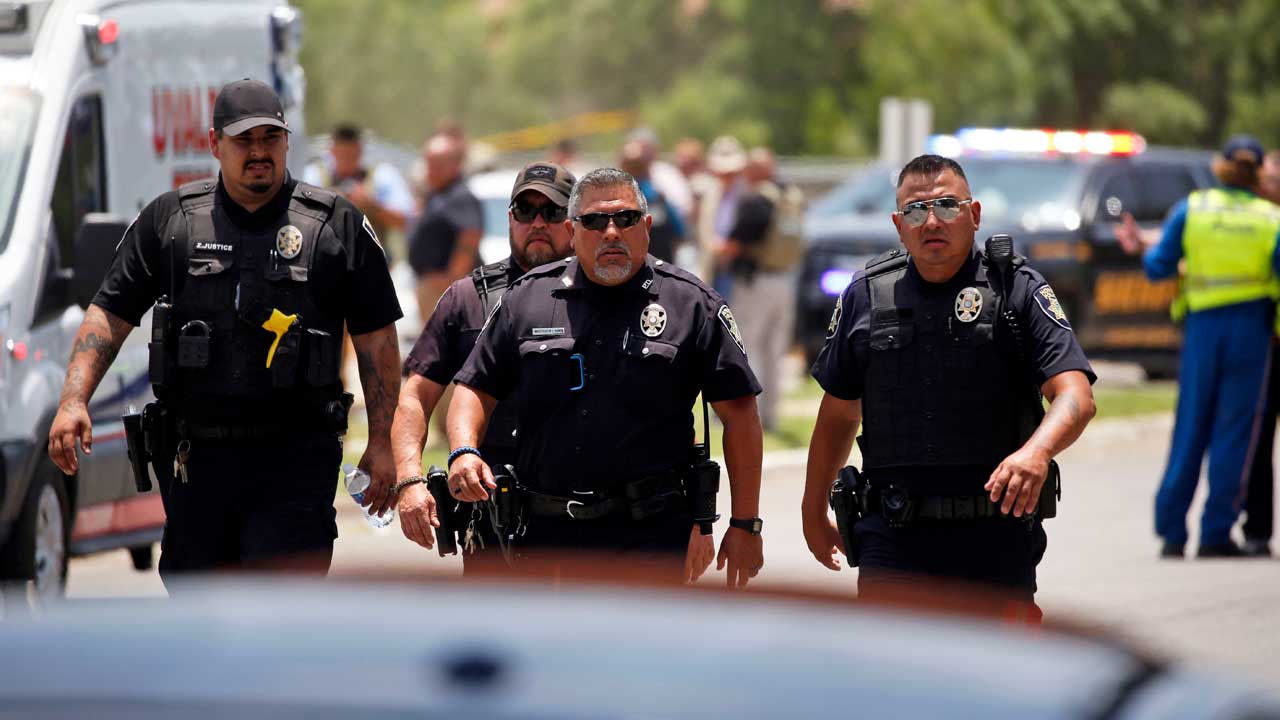 Uvalde’s school district on Friday pulled its embattled campus police force off the job following a wave of new outrage over the hiring of a former state trooper who was part of the hesitant law enforcement response during the May shooting at Robb Elementary School.

School leaders also put two members of the district police department on administrative leave, one of whom chose to retire instead, according to a statement released by the Uvalde Consolidated Independent School District.

The extraordinary move by Uvalde school leaders to suspend campus police operations — one month into a new school year in the South Texas community — underscored the sustained pressure that families of some of the 19 children and two teachers killed in the May 24 attack have kept on the district.

Brett Cross, whose 10-year-old son Uziyah Garcia was among the victims, had been protesting outside the Uvalde school administration building for the past two weeks, demanding accountability over officers allowing a gunman with an AR-15-style rifle to remain in a fourth-grade classroom for more than 70 minutes.

“We did it!” Cross tweeted.

The Uvalde school district had five campus police officers on the scene of the shooting, according to a damning report from Texas lawmakers that laid out multiple breakdowns in the response. A total of 400 officers responded, including school district police, the city’s police, county sheriff’s deputies, state police and U.S. Border Patrol agents, among others.

The district said it would ask the Texas Department of Public Safety, which had already assigned dozens of troopers to the district for the school year, for additional help. Spokespersons for the agency did not immediately return messages seeking comment Friday.

“We are confident that staff and student safety will not be compromised during this transition,” the district said in a statement.

The statement did not specify how long campus police operations would remain suspended. School police officers will be assigned to other roles in the district, the statement said.

The move comes a day after revelations that the district not only hired a former DPS trooper who was one of the officers who rushed to the scene of Robb Elementary, but that she was among at least seven troopers later placed under internal investigation for her actions.

Officer Crimson Elizondo was fired Thursday, one day after CNN first reported her hiring. She has not responded to voicemails and messages left by The Associated Press.

The fallout Friday is the first in Uvalde’s school police force since the district fired former police Chief Pete Arredondo in August. He remains the only officer to have been fired from his job following one of the deadliest classroom attacks in U.S. history.

Steve McCraw, the head of the state’s Department of Public Safety, has called the law enforcement response to the shooting an “abject failure.” McCraw has also come under pressure as the leader of a department had more than 90 troopers on the scene but still has the support of Republican Gov. Greg Abbott.

On Thursday, after Elizondo was fired, Abbott called it a “poor decision” for the school to hire the former trooper and that it was up to the district to “own up to it.”