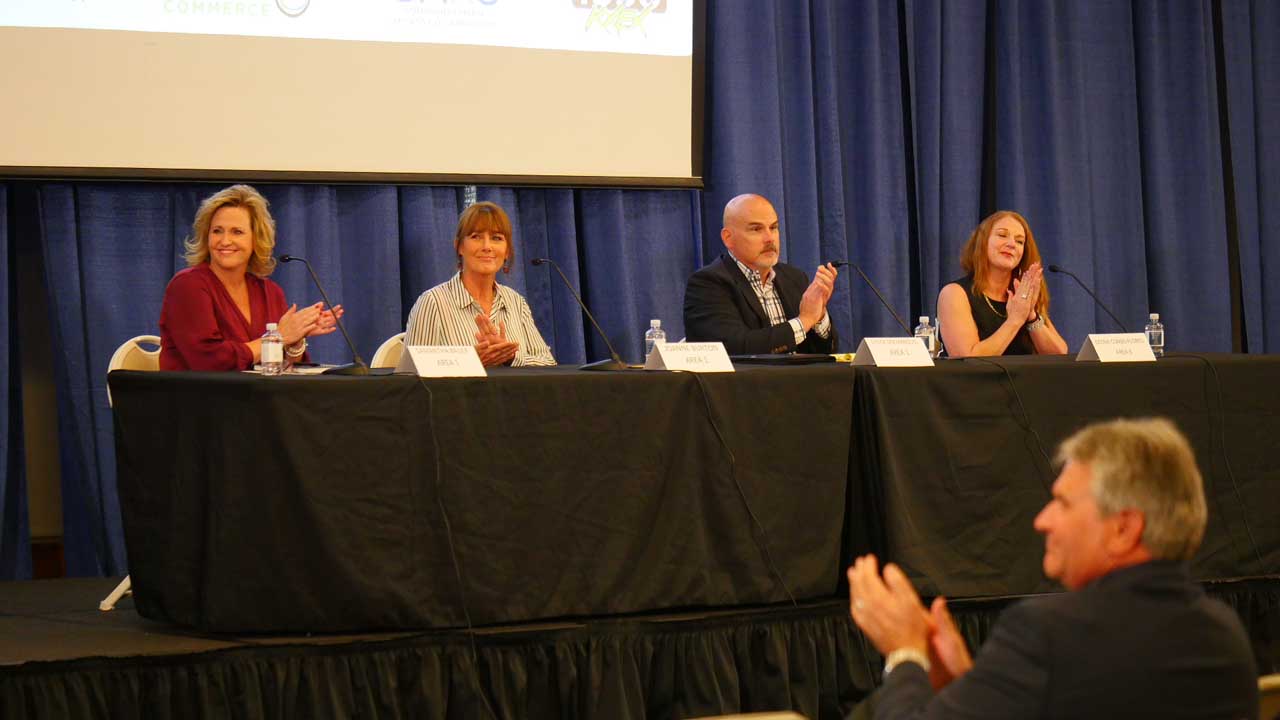 There was more agreement than disagreement among four candidates running for Clovis Unified School Board seats at a forum Monday evening. The board hopefuls generally expressed their intention to listen to parents’ concerns, uphold the district’s educational standards, and fight for important decisions to be made at the local level.

Three other candidates who are on the November ballot did not attend.

The one-hour forum, held at the Clovis Veterans Memorial District headquarters and co-hosted by the district and the Clovis Chamber of Commerce, gave the participating candidates — communications consultant Samantha Bauer, Realtor Joanna Burton, insurance broker Chuck Der Manouel, and teacher Deena Combs-Flores — the opportunity to talk about why they are running for office, what makes them suitable to serve on the School Board, who is supporting or has endorsed them, as well as answer a series of questions including whether schools should require “daily exercise of patriotism.”

Bauer, Burton, and Der Manouel are running for the open Area 1 seat formerly held by Trustee Susan Hatmaker, who resigned in January when she moved out of the area.

Combs-Flores is seeking election to the open Area 6 seat formerly held by Trustee Betsy Sandoval, who decided to retire after serving for decades on the board.

Skipping the forum were nonprofit executive Clint Olivier, seeking the Area 1 seat, retired business owner Bill Whitmore, who is running for the Area 6 seat, and Board President Tiffany Stoker Madsen, who is unopposed in her re-election bid in Area 3.

Clovis Unified voters will be able to select a candidate in each of the three areas in the Nov. 8 election.

Bauer, the frontrunner in campaign fundraising with more than $37,000 reported in her latest campaign filing, touted her experience working for two school districts as well as in statewide education policy, her service as chair of the Clovis Unified’s Citizens Oversight Committee, and being a “proud parent and volunteer” as her qualifications. She repeatedly referenced “Doc’s Charge,” the district’s framework for excellence drawn up by longtime Superintendent Floyd “Doc” Buchanan. Bauer said she has been endorsed by two former superintendents, Terry Bradley and Janet Young, and Moms on the Ground, “an incredible group of women that fought to get our kids back in the class and for mask choice.”

Burton said she is running not as a parent or grandparent but as someone who is concerned about the future and who wants to advocate for parents whose voices she says are ignored by the School Board and state officials in making decisions affecting their children. She said she has been endorsed by No Left Turn in Education, a national grassroots organization that claims radicals are attempting to take over schools with a totalitarian ideology concealed in issues such as diversity, equity, inclusion, and social justice, and by twice-censured Fresno Unified Trustee Terry Slatic. Burton said she also has been “verbally” endorsed by her pastor Anthony Flores of Adventure Church and Republican Kevin Cookingham, who lost to Democrat Jim Costa in the 2020 congressional election.

Der Manouel said he is running to be the “voice of the parent” on the School Board. He said Clovis Unified failed to push back earlier and harder on the mask mandate, which health officials had urged schools to adopt to slow the spread of COVID-19. “The reason that I decided to get more involved is because, one, our kids have to come first. Two, we have to get the parents and keep them involved now that we have their attention. And the curriculum that’s coming down the path and the other social and gender identity issues that are coming, we have to have someone on that board that’s willing to push back and stand up,” he said. Der Manouel said he has been endorsed by the Fresno County Republican Assembly.

Combs-Flores said her experience as a teacher as well as mother and guardian of five children, including four graduates of Clovis East and Clovis High and a current Clovis High student, gives her insight that will be valuable on the School Board. She termed herself a “conservative educator and conservative Christian” who is concerned about the mandates coming from outside the district. Combs-Flores said she has been endorsed by the Fresno County Republican Assembly and also the Fresno County Republican Party Central Committee. 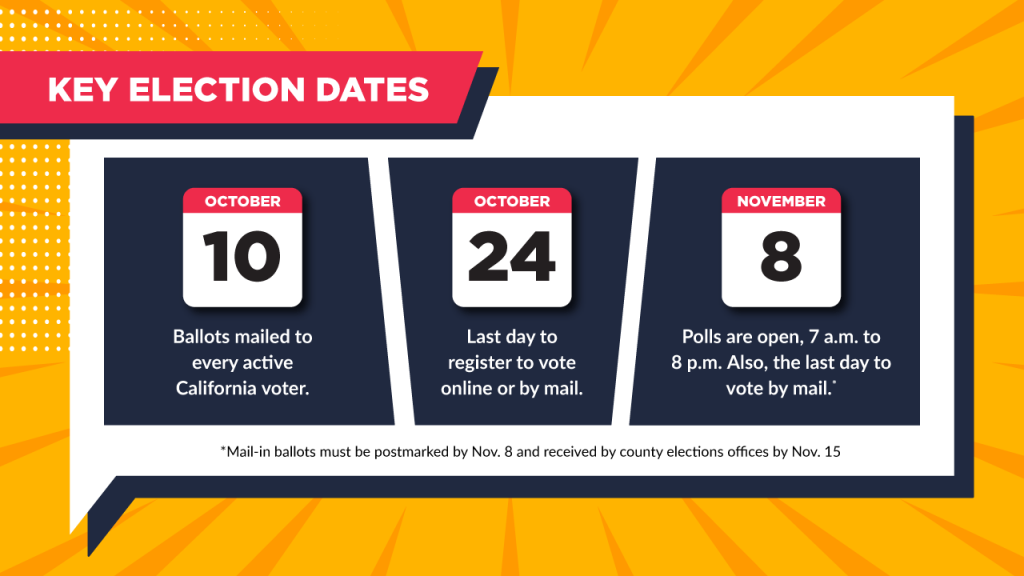 Among the questions the candidates were asked to answer was whether schools should require a daily patriotic exercise.

Combs-Flores: “You definitely need to stand up every morning and pledge allegiance to our flag. I, as a schoolteacher for the last 16 years, I have so many of my students, just trying to get them to stand up and to pledge our flag, and that I am one of the probably the largest patriots. And … I don’t know all of you, but I am a huge patriot, and I still remember 911 and I think a lot of our younger generation, I think it comes down to our parents. Our parents need to teach our kids the importance of this great country and the importance of being a patriot and pledging allegiance to our flag.”

Der Manouel: “I agree that we should continue to do the flag salute. I think it’s the most respectful thing we can do at the start of our day for our country. I think the other patriotic exercises that are available are to just teach our history the right way and not change it in the future. And that in and of itself will create the patriotism that we should have with our kids. Our kids should be taught about America being exceptional, because it is the greatest country in the world. And right now in many areas, and thankfully it hasn’t invaded Clovis yet because I check the social studies book that my daughter brings home, but in many areas of this country, that’s what’s happening, is we’re revising and rewriting history. We can’t do that. That’s the patriotic exercise. Teach American exceptionalism.”

Burton: “Absolutely. I would think that this is one thing we don’t have to, we really, as teachers and administrators, should exercise and the children learn that at school. Certainly, if they do it at home, that’s wonderful. But the repetition of every day when you go to school instills in you a sense of patriotism. And how else do you learn it, really, as a child? So it’s a very, very important part of starting and beginning the day. And I am also in favor of prayer where, not inhibiting it and not disallowing prayer if that is something that is wanted, and children want to do that, too. So I don’t believe any of that should be left out. It’s very important.”

Bauer: “Absolutely. I worked for Elk Grove Unified School District. We were the school district that defended the Pledge of Allegiance all the way to the United States Supreme Court. One of our parents, Michael Newdow, sued us for alleging a violation of separation of church and state because of the word God in the pledge. We won the lower court and the Ninth Circuit Court of Appeals, of course, overturned it, and we decided to take it all the way to the United States Supreme Court because we worked for a community that believed in it. And I believe that Clovis has a huge cornerstone of patriotism, and we absolutely need to provide that opportunity for our kids every single day, whether that’s the Pledge of Allegiance or teaching about the great things about America.”

Bauer’s campaign reported raising $37,395, including $3,500 she loaned her campaign, and spending $14,436 as of Sept. 30. Her contributors include Clovis Unified employees, contractors, local attorneys, and business owners.

Olivier’s campaign reported raising $33,170 and spending $27,091 as of Sept. 30. His contributors include contractors, business owners, and developers.

Darius Assemi, president and CEO of Granville Homes, is publisher of GV Wire.

Der Manouel and Whitmore have established campaign committees but did not file finance reports as of Sept. 30.