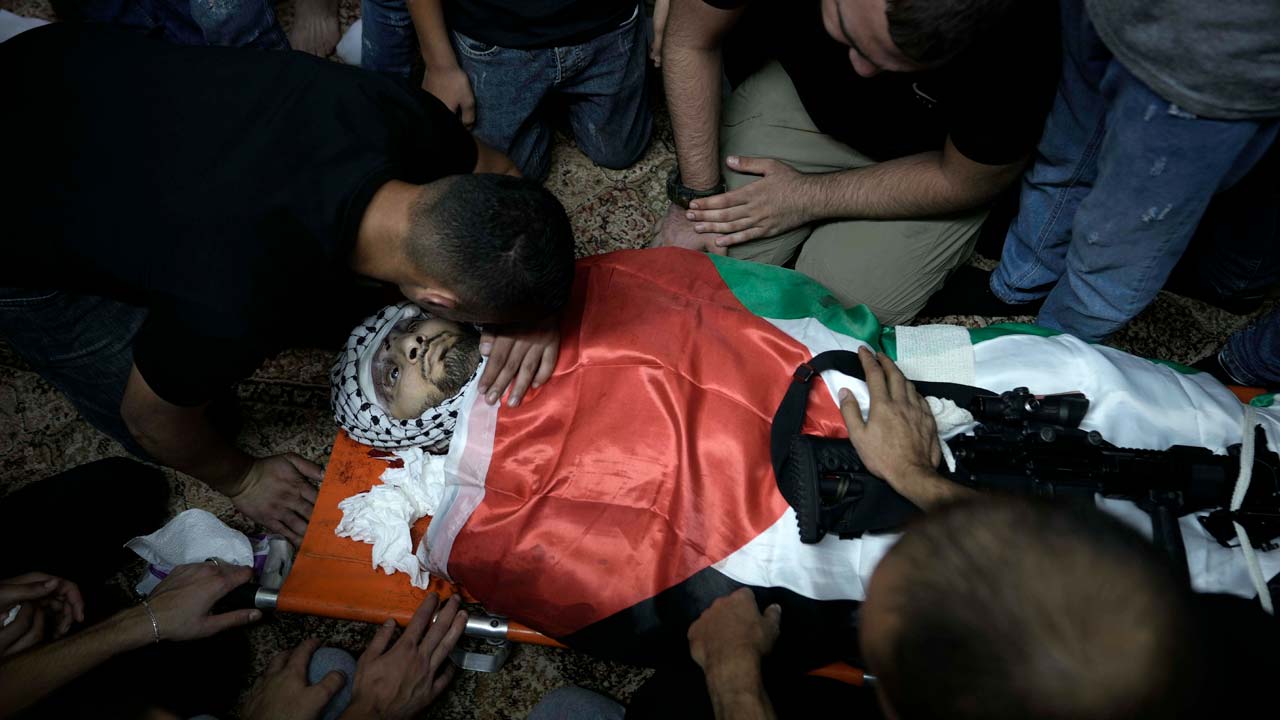 At least four Palestinians were killed, the Palestinian Health Ministry reported, the latest in a series of deadly Israeli operations in the occupied West Bank. (AP Photo/ Majdi Mohammed)
Share with friends

At least four Palestinians were killed and 44 wounded during an Israeli military raid Wednesday into the Jenin refugee camp in the West Bank, the Palestinian Health Ministry reported, marking the deadliest episode since Israel escalated a crackdown on the occupied territory earlier this year.

Israeli forces said they fatally shot two Palestinians they had been sent to arrest in the camp over their suspected involvement in recent shooting attacks. When soldiers surrounded a house in the camp, a bomb exploded, a gunfight ensued and Israeli troops killed the two Palestinians, the military said. The army later released drone footage showing a large explosion that it said was detonated by militants.

During the raid, armed clashes broke out in the camp as militants hurled rocks and opened fire at arriving troops. Two Palestinians were killed and at least 44 others were wounded, the Palestinian Health Ministry said. Amateur video showed one of the men being shot in the head as he appeared to be aiming a weapon at Israeli troops.

Israel has been conducting nightly raids in the northern West Bank since a series of deadly Palestinian attacks in Israel last spring. Much of that activity has been focused in the Jenin area — where some of the attackers lived. Israel identified one of the Palestinians killed in Wednesday’s raid as Rahman Hazam, the brother of a Palestinian gunman who carried out a deadly shooting attack in central Tel Aviv last April before he was killed by police.

“This was the bloodiest day this year,” said Jamal Huweil, a 52-year-old camp resident and official in the ruling Fatah party. “People are killed, wounded. There’s destruction. Every time (Israeli forces) come into the Jenin camp, our resistance becomes stronger and stronger.”

It was chaos as Israeli troops exchanged fire with Palestinian militants on nearly every street of the crowded camp, sending bullets in all directions. Young protesters rushed to hurl stones and hand grenades at Israeli soldiers and scrambled from gunfire. Israeli armored vehicles and bulldozers rumbled down the battered roads. The clashes escalated as angry crowds of men marched through the camp’s narrow alleys holding aloft the bodies, shrouded in flags of local militant groups, of the killed Palestinians.

“We are here for martyrdom,” they cried.

Alawneh is the second Palestinian security officer killed in a confrontation with Israeli troops this month. While U.S.-trained Palestinian security forces have long cooperated with Israel in an uneasy alliance against Islamic militants, the recent shootings of officers lay bare Palestinians’ deep disillusionment with the security coordination. A cadre of young men with no outlet and little hope for the future have increasingly joined militant groups.

Jenin — long considered a bastion of Palestinian militancy and frequent flashpoint for violence — is governed by the Palestinian Authority like most other Palestinian urban centers, even though the Israeli military routinely carries out arrest raids in the area. The PA says the Israeli raids undermine its own forces, who are seen by many residents as collaborating with Israel.

Nabil Abu Rdeneh, a spokesman for Abbas, denounced the raid, saying Israel’s “policy of escalation” will not deliver “legitimacy, security or stability.”

Fatah called for protests and a general strike in the West Bank over what it described as a “dangerous escalation.” Small groups of Palestinians threw stones at Israeli troops and and burned tires at checkpoints near the major cities of Ramallah and Nablus, where the army responded with tear gas and rubber bullets. There were no immediate reports of casualties.

Dozens of Palestinians have been killed in the campaign of raids on the West Bank, making this year the deadliest in the occupied territory since 2015.

Most of the Palestinians killed in the recent wave of Israeli raids have been wanted militants, as well as young men who throw stones or fire bombs at soldiers invading their towns. But some civilians, including an Al Jazeera journalist and a lawyer who inadvertently drove into a battle zone, have also been killed in the violence.

Israel captured the West Bank in the 1967 Mideast war and has built more than 130 settlements across the territory that are home to nearly 500,000 Jewish settlers. The Palestinians want the West Bank, home to some 3 million Palestinians, to form the main part of their future state.

The last serious peace talks broke down more than a decade ago.