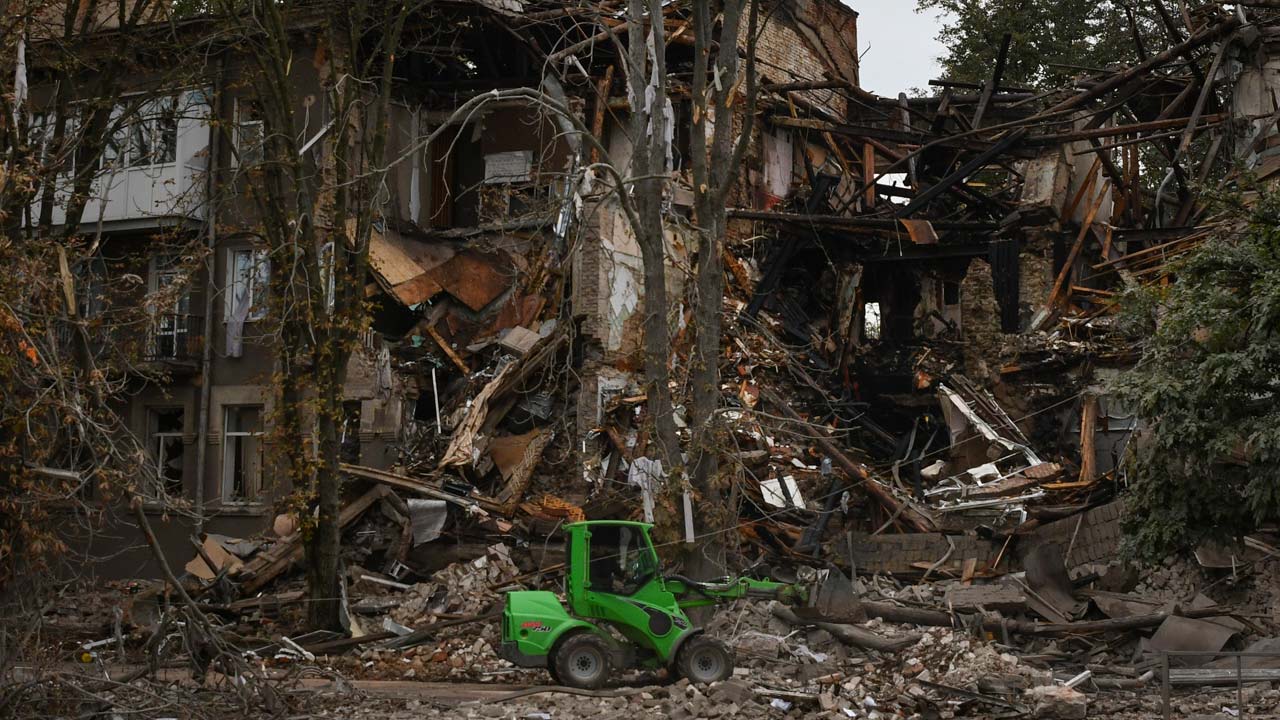 Communal workers clean the debris from the street in front of a heavily damaged building after a Russian attack in Ukraine. (AP Photo/Andriy Andriyenko)
Share with friends

Pro-Moscow officials say people in all four occupied Ukrainian areas voted to join Russia in Kremlin-run referendums that have been dismissed by the U.S. and its Western allies as illegitimate.

The preordained outcome sets the stage for a dangerous new phase in Russia’s seven-month war in Ukraine because it is expected to serve as a pretext for Moscow to annex the four areas. That could happen as soon as Friday.

The referendums in the Luhansk and Kherson regions and parts of Donetsk and Zaporizhzhia began Sept. 23, often with armed officials going door-to-door collecting votes. The ballots asked residents whether they wanted the areas to be incorporated into Russia.

Russian President Vladimir Putin is expected to address Russia’s parliament about the referendums on Friday, and Valentina Matviyenko, who chairs the parliament’s upper house, said lawmakers could consider annexation legislation on Oct. 4.

Meanwhile, Russia ramped up warnings that it could deploy nuclear weapons to defend its territory, including newly acquired lands, and continued mobilizing more than a quarter-million more troops to deploy to a front line of more than 1,000 kms (more than 620 miles).

After the balloting, “the situation will radically change from the legal viewpoint, from the point of view of international law, with all the corresponding consequences for protection of those areas and ensuring their security,” Kremlin spokesman Dmitry Peskov said Tuesday.

Many Western leaders have called the referendum a sham, and the U.N. Security Council was scheduled to meet later Tuesday in New York to discuss a resolution that says the voting results will never be accepted and that the four regions remain part of Ukraine. Russia is certain to veto the resolution.

The balloting and a call-up of Russian military reservists that Putin ordered last Wednesday are aimed at buttressing Moscow’s exposed military and political positions.

The referendums follow a familiar Kremlin playbook for territorial expansion. In 2014, Russian authorities held a similar referendum on Ukraine’s Crimean Peninsula, under the close watch of Russian troops. Based on the voting, Russia annexed Crimea. Putin cited the defense of Russians living in Ukraine’s eastern regions, and their supposed desires to join with Russia, as a pretext for his Feb. 24 invasion of Ukraine.

Putin has been talking up Moscow’s nuclear option since Ukrainians launched a counteroffensive that reclaimed territory and has increasingly cornered his forces. A top Putin aide ratcheted up the nuclear rhetoric Tuesday.

“Let’s imagine that Russia is forced to use the most powerful weapon against the Ukrainian regime that has committed a large-scale act of aggression, which is dangerous for the very existence of our state,” Dmitry Medvedev, deputy head of the Russian Security Council that Putin chairs, wrote on his messaging app channel. “I believe that NATO will steer clear from direct meddling in the conflict.”

The United States has dismissed the Kremlin’s nuclear talk as a scare tactic.

The referendums ask residents whether they want the areas to be incorporated into Russia, and the Kremlin has portrayed them as free and fair, reflective of the people’s desire for self-determination.

Tens of thousands of residents had already fled the regions because of the war, and images shared by those who remained showed armed Russian troops going door-to-door to pressure Ukrainians into voting.

Mariupol Mayor Vadym Boychenko, who left the port city after the Russians seized it after a months-long siege, said only about 20% of the 100,000 estimated remaining residents cast ballots in the Donetsk referendum. Mariupol’s pre-war population was 541,000.

“A man toting an assault rifle comes to your home and asks you to vote, so what can people do?” Boychenko asked during a news conference, explaining how people were coerced into voting.

British Foreign Secretary James Cleverly said the ballots were “a desperate move” by Putin. French Foreign Minister Catherine Colonna said while visiting Kyiv on Tuesday that France was determined “to support Ukraine and its sovereignty and territorial integrity.”

She described the ballots as “mock referendums.” Ukrainian officials said Paris and Kyiv had moved closer to an agreement that would supply Ukrainian forces with French Caesar artillery systems.

Elsewhere, trouble emerged for Putin in the mass call-up he ordered of Russians to active military duty.

The order has triggered a massive exodus of men from Russia, fueled protests in many regions and sparked acts of violence. On Monday, a gunman opened fire in an enlistment office in a Siberian city and gravely wounded the local chief military recruitment officer. Scattered arson attacks had been reported earlier on other enlistment offices.

One destination of fleeing Russian men is Kazakhstan, which reported Tuesday that about 98,000 Russians have crossed into Kazakhstan over the past week.

The European Union’s border and coast guard agency says 66,000 Russian citizens entered the 27-nation bloc from Sept. 19 to 25, a 30% increase over the preceding week.

Russian officials tried to intercept some of the fleeing reservists on one of the main exodus routes, issuing conscription notices on the Georgian border. According to the state-run TASS agency, an enlistment task force was handing out notices at the Verkhnii Lars checkpoint, where an estimated 5,500 cars were lining up to cross. Independent Russian news sources have reported unconfirmed claims that draft-age men will be banned from leaving after the referendum.

As Moscow worked to build up its troops in Ukraine, potentially sending them to supplement its proxies who have been fighting in the separatist regions for the past eight years, Russian shelling continued to claim lives. Russian barrages killed at least 11 civilians and wounded 18 in 24 hours, Ukraine’s presidential office said Tuesday.

The human toll was also reflected in a U.N. human rights monitoring mission’s first comprehensive look at violations and abuses Russia and Ukraine committed between Feb. 1 and July 31, the first five months of Russia’s invasion.

Matilda Bogner, the mission’s chief, said Ukrainian prisoners of war appeared to have faced “systematic” mistreatment, “not only upon their capture, but also following their transfer to places of internment” in Russian-controlled areas of Ukraine and Russia itself.

The Ukraine war is still gripping world attention, as it causes widespread shortages and rising prices not only for food but energy, driving up the cost of living everywhere, and worsening global inequality. The talk of nuclear war has only deepened concerns.

Misery and hardship are often the legacy of Russia’s occupation of Ukrainian areas that Kyiv’s forces have recaptured. Some people have been living without gas, electricity, running water and the internet since March.

The war has brought an energy crunch for much of Western Europe, with German officials seeing the disruption of Russian supplies as a Kremlin power play to pressure Europe over its support for Ukraine.

The danger to energy supplies grew when seismologists reported Tuesday that explosions rattled the Baltic Sea before unusual leaks were discovered on two underwater natural gas pipelines running from Russia to Germany. Some European leaders and experts pointed to possible sabotage during an energy standoff with Russia provoked by the war in Ukraine. The three leaks were reported on the Nord Stream 1 and 2 pipelines, which are filled with natural gas but not delivering the fuel to Europe.

The damage means that the pipelines are unlikely to be able to carry any gas to Europe this winter even if the political will to bring them online emerged, analysts at the Eurasia Group said.