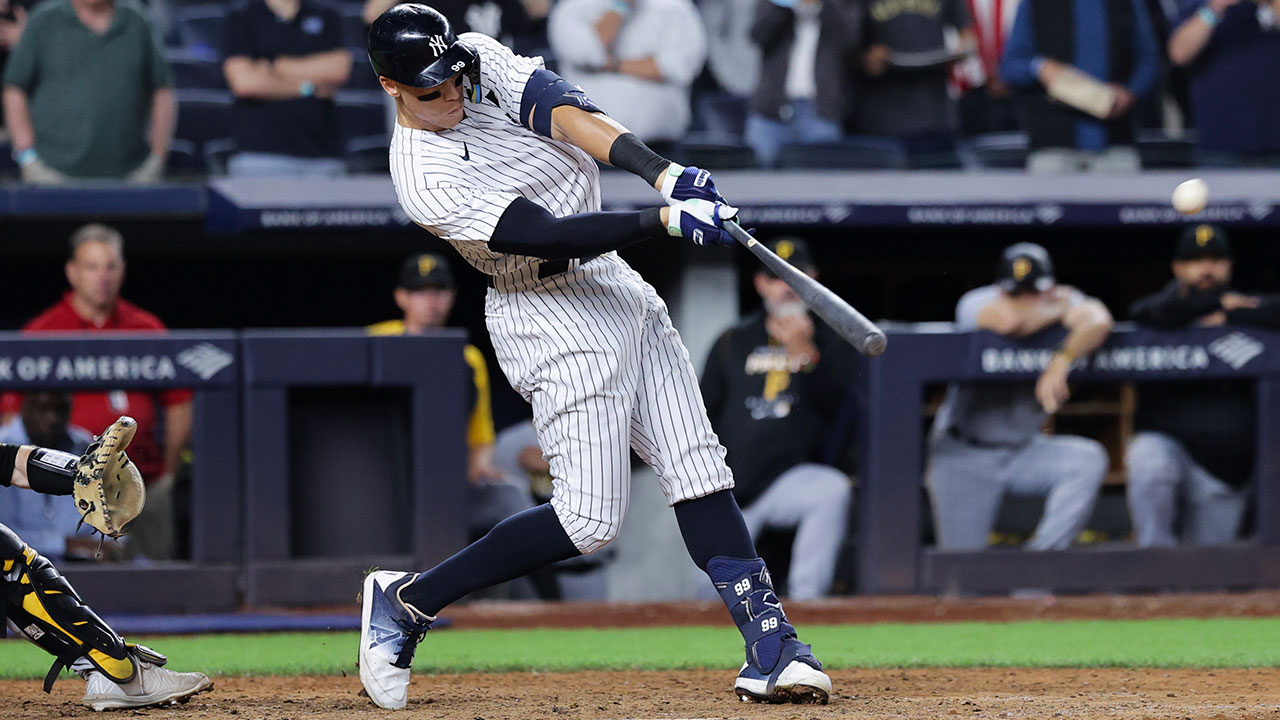 Aaron Judge hits his 60th home run of the season against Pittsburgh on Tuesday, Sept. 20, 2022, in New York. (AP/Jessie Alcheh)
Share with friends

NEW YORK — Aaron Judge sent a sinker soaring into the left-field bleachers, another of his no-doubt drives, and circled the bases for the 60th time.

Modest throughout a march into history that now has him level with Babe Ruth, Judge then took a moment far rarer than one of his long balls — a curtain call.

“I really didn’t want to do it, especially, we’re losing, it’s a solo shot,” said the former Fresno State standout, recalling how his leadoff homer in the ninth inning only cut the Yankees’ deficit to three runs.

“I kind of lost my mind,” said Judge, one homer shy of matching Roger Maris’ American League season record. “That’s a signature Giancarlo Stanton 10-foot(-high) laser to the outfield. I had a good front-row seat for that one. I think the whole team lost its mind and the stadium erupted.”

Judge homered on a 3-1 pitch from Wil Crowe (5-10) to match Ruth’s total from 1927, which stood as the big league record until Maris broke it 34 years later.

Judge’s accomplishment is without taint.

“I think it puts it a notch above,” said Yankees manager Aaron Boone. “I got to believe it’s right there with some of the best very short list of all-time seasons.”

Judge got to 60 in Game 147 — no debate on the length of the season, like what surrounded Maris’ pursuit to the point his hair fell out. Judge is on pace for the AL’s first Triple Crown in a decade, leading in home runs, RBIs (128) and batting average (.316).

No one else in the majors has more than 40 home runs.

Judge dropped his bat near the plate — he never flips — and when he finished his trot after his 430-foot drive, he exchanged a high-five with Anthony Rizzo, a hug with Gleyber Torres, and slaps with Josh Donaldson. Judge walked up and down the dugout to receive congratulations and then emerged from the dugout steps and ever so briefly tipped his helmet to fans.

“I kind of joked around with Matt Carpenter earlier in the year, I think he had two homers in a game or something like that and he got a curtain call,” Judge said. “Man, I’ve been here six years and I’ve only got one curtain call. So I guess it takes hitting 60 to get another one.”

Sons of Roger Maris at the Game

Roger Maris Jr. and Kevin Maris, sons of the former player, were both on hand. Stanton noted Judge’s understated manner.

“He hit 60 tonight, and it’s like nothing happened. He’s got more work to do,” said Stanton, who hit 59 for Miami five years ago.

Crowe’s great-great uncle, Hall of Famer Red Ruffing, was Ruth’s teammate on the Yankees in the 1930s. Crowe visited Ruffing’s plaque in Yankee Stadium’s Monument Park before the game.

“He did what he was supposed to do with it,” Crowe said of Judge, “3-1 count, I’m not going to put him on. I felt like I wanted to go after him. Started away, came back in. He put a good swing on a bad pitch.”

Dodger Great Maury Wills, Who Revived the Art of the Stolen Base, Dies at 89