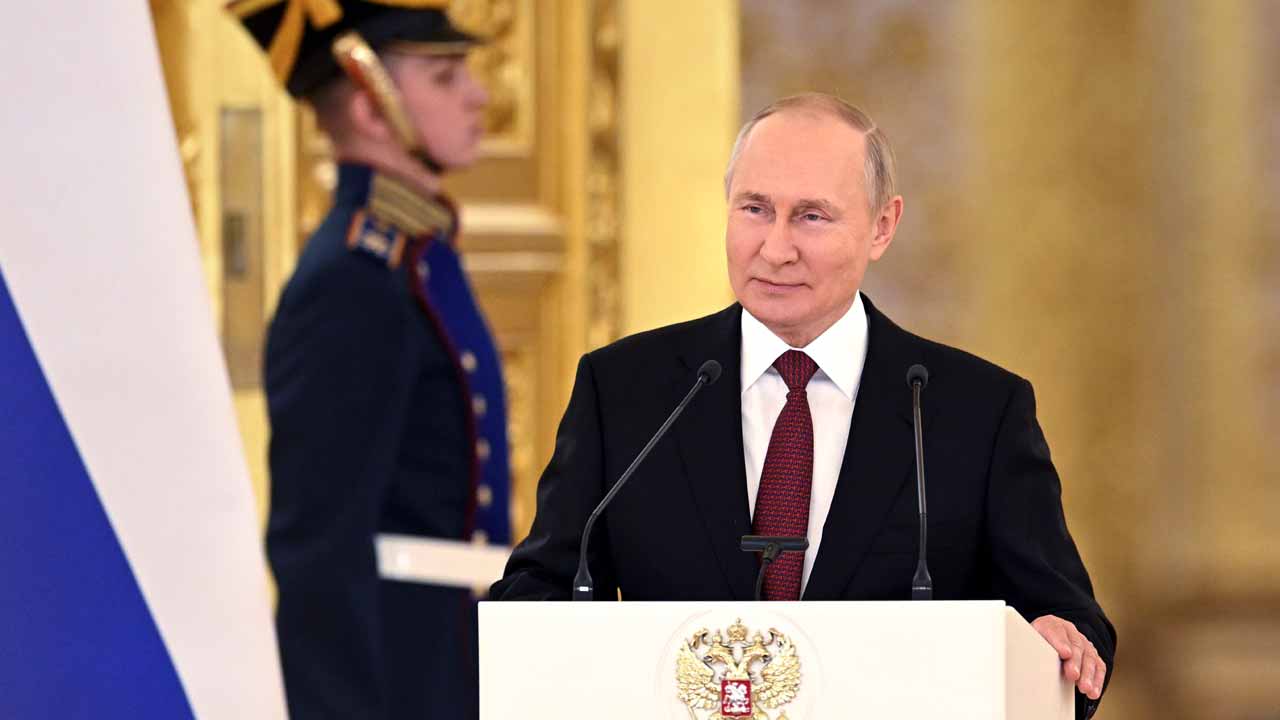 Russian President Vladimir Putin delivers a speech as he attends a ceremony in the Kremlin. (Pavel Bednyakov, Sputnik, Kremlin Pool Photo via AP)
Share with friends

Russian-controlled regions of eastern and southern Ukraine announced plans Tuesday to start voting this week to become integral parts of Russia. The concerted and quickening Kremlin-backed efforts to swallow up four regions could set the stage for Moscow to escalate the war following Ukrainian successes on the battlefield.

The scheduling of referendums starting Friday in the Luhansk, Kherson and partly Russian-controlled Zaporizhzhia and Donetsk regions came after a close ally of Russian President Vladimir Putin said the votes are needed and as Moscow is losing ground in the invasion it began nearly seven months ago, increasing pressure on the Kremlin for a stiff response.

Former President Dmitry Medvedev, the deputy head of Russia’s Security Council chaired by Putin, said referendums that fold regions into Russia itself would make redrawn frontiers “irreversible” and enable Moscow to use “any means” to defend them.

The votes, in territory Russia already controls, are all but certain to go Moscow’s way but are unlikely to be recognized by Western governments who are backing Ukraine with military and other support that has helped its forces seize momentum on battlefields in the east and south.

Ukrainian Foreign Minister Dmytro Kuleba denounced them as a sham and tweeted that “Ukraine has every right to liberate its territories and will keep liberating them whatever Russia has to say.”

There was also swift international condemnation. Speaking in New York, where he is attending the U.N. General Assembly, German Chancellor Olaf Scholz said: “It is very, very clear that these sham referendums cannot be accepted.”

Latvian Foreign Minister Edgars Rinkevics called for more sanctions against Russia and more weapons for Ukraine, tweeting: “We must say no to Russian blackmail.”

In Donetsk, part of Ukraine’s wider Donbas region that has been gripped by rebel fighting since 2014 and which Putin has set as a primary objective of the invasion, separatist leader Denis Pushilin said the vote will “restore historic justice” to the territory’s “long-suffering people.”

They “have earned the right to be part of the great country that they always considered their motherland,” he said.

Pressure inside Russia for votes and from Moscow-backed leaders in Ukrainian regions that Moscow controls increased after a Ukrainian counteroffensive — bolstered by Western-supplied weaponry — that has recaptured large areas.

Former Kremlin speechwriter and Russian political analyst Abbas Gallyamov said on Facebook that Moscow-backed separatists appeared “scared that the Russians will abandon them” amid the Ukrainian offensive and forged ahead with referendum plans to force the Kremlin’s hand.

In another signal that Russia is digging in for a protracted and possibly ramped-up conflict, the Kremlin-controlled lower of house of parliament voted Tuesday to toughen laws against desertion, surrender and looting by Russian troops. Lawmakers also voted to introduce possible 10-year prison terms for soldiers refusing to fight. If approved, as expected, by the upper house and then signed by Putin, the legislation would strengthen commanders’ hands against failing morale reported among soldiers.

Kremlin spokesman Dmitry Peskov said there are no prospects for a diplomatic settlement. Medvedev, who served as Russia’s president from 2008-2012, said on his messaging app channel that separatist region votes are important to protect their residents and would “completely change” Russia’s future trajectory.

“After they are held and the new territories are taken into Russia’s fold, a geopolitical transformation of the world will become irreversible,” Medvedev said.

“An encroachment on the territory of Russia is a crime that would warrant any means of self-defense,” he said, adding that Russia would enshrine the new territories in its constitution so no future Russian leader could hand them back.

Ukrainian analyst Volodymyr Fesenko, head of the independent Penta Center think-tank based in Kyiv, said the Kremlin hopes the votes and the possibility of military escalation will raise the pressure from Western governments for Ukrainian President Volodymyr Zelenskyy to start talks with Moscow.

The move “reflects the weakness, not the strength of the Kremlin, which is struggling to find levers to influence the situation that has increasingly spun out of its control,” he said.

The recapturing of territory, most notably in the northeastern Kharkiv region, has strengthened Ukraine’s arguments that its troops could deliver more stinging defeats to Russia with additional armament deliveries.

More heavy weaponry is on its way, with Slovenia promising 28 tanks and Germany pledging four additional self-propelled howitzers. More aid also is expected from Britain, already one of Ukraine’s biggest military backers after the U.S. British Prime Minister Liz Truss is expected to promise that in 2023, her government will “match or exceed” the 2.3 billion pounds ($2.7 billion) in military aid given to Ukraine this year.

The swiftness of the Ukrainian counteroffensive also saw Russian forces abandon armored vehicles and other weapons as they beat hasty retreats. Ukrainian forces are recycling the captured weaponry back into battle. A Washington-based think tank, The Institute for the Study of War, said abandoned Russian T-72 tanks are being used by Ukrainian forces seeking to push into Russian-occupied Luhansk.

In the counteroffensive’s wake, Ukrainian officials found hundreds of graves near the once-occupied city of Izium. Yevhenii Yenin, a deputy minister in Ukraine’s Internal Affairs Ministry, told a national telecast that officials found many bodies “with signs of violent death.”

“These are broken ribs and broken heads, men with bound hands, broken jaws and severed genitalia,” he said.

Meanwhile, Ukraine’s southern military command said its troops sank a Russian barge carrying troops and weapons across the Dnieper River near the Russian-occupied city of Nova Kakhovka. It offered no other details on the attack in the Russian-occupied Kherson region, which has been a major target in the Ukrainian counteroffensive.

— Moscow has likely moved its Kilo-class submarines from their station on the Crimean Peninsula to southern Russia over fears about them being struck by long-range Ukrainian fire, the British military said.

— McDonald’s restaurants in Kyiv began serving again for the first time since the invasion, offering only delivery service initially but marking a step of sorts back toward the life Ukrainians knew before the war.

UN Chief: World Is ‘Paralyzed’ and Equity Is Slipping Away