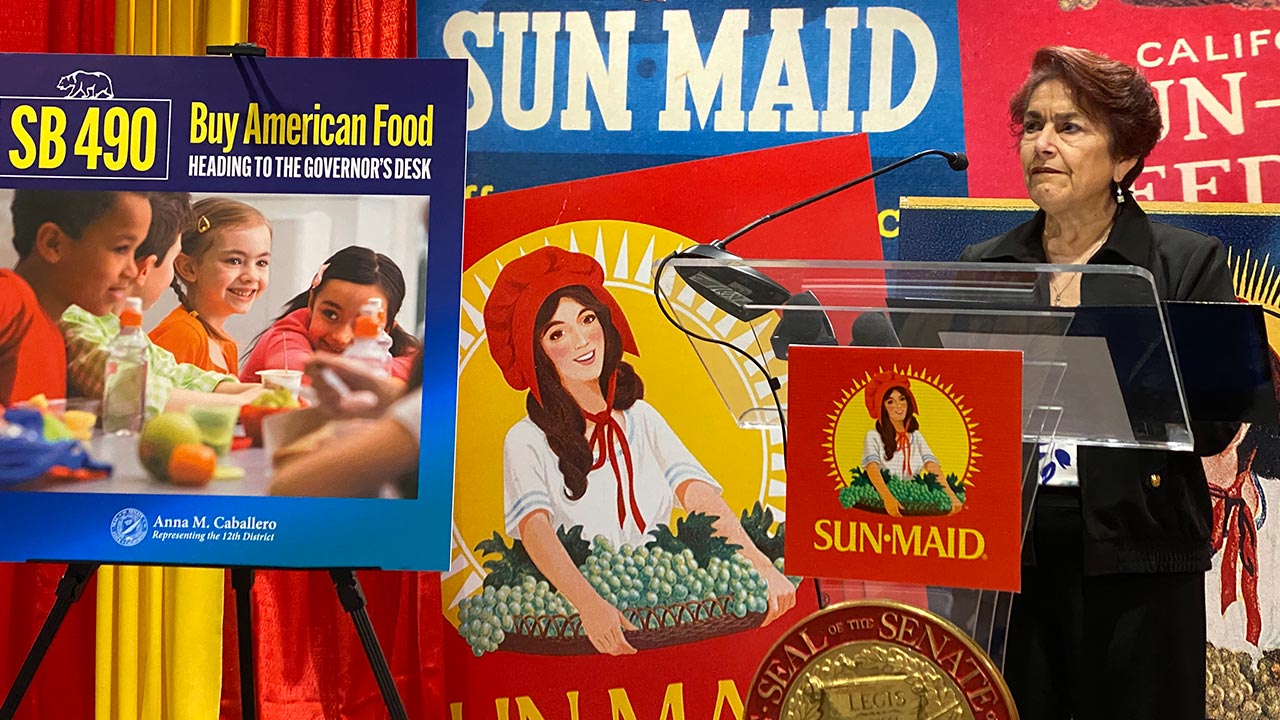 Anna Caballero says buying American isn’t a political patriotic slogan, but a reflection of who she is.

“I try to spend my money where my values are. So I try to buy American as much as I can,” the Central Valley state Senator said.

At a Wednesday news conference at the Fresno headquarters of Sun-Maid Raisins, Caballero, D-Merced, urged Gov. Gavin Newsom to sign SB 490. The bill would require public institutions, such as schools, to prepare meals using American produce.

“SB 490 is a critical tool to help us not only feed nutritious meals, but also to assist the farmers and their workforce as well,” Caballero said.

Specifically, SB 490 “requires a public institution that receives federal meal reimbursement funding to provide prepared meals to include in their solicitation for bids and contracts that only the purchase of agricultural food products grown, packed, or processed domestically” the official bill analysis says.

The bill received only one no vote on the Senate or Assembly floors. The only member of the Central Valley delegation not to support the bill was Assemblyman Rudy Salas, D-Bakersfield, who did not record a vote.

The bill allows for the purchase of American-made produce to be 25% higher than imported goods.

The California School Board Association opposes the bill, calling it “well-intentioned but harmful.”

“Its provisions would have exposed schools to price gouging from vendors and established pricing thresholds that don’t apply to other public entities,” the CSBA says.

Caballero says they are right.

“There’s no question in my mind, it’s going to cost more,” Caballero said.

But paying more for food safety, labor and job safety are worth it.

“That’s one of the reasons we included additional revenue in the budget to help school districts to be able to pay for that extra cost,” Caballero said.

A coalition of school groups, in a letter to legislators, said the bill “is of deep concern that the answer to securing union jobs in one industry would be at the expense or detriment of other unionized professions, such as teachers and our classified staff.” 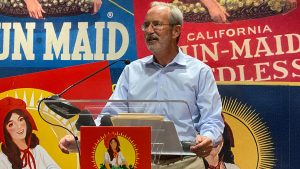 “What is devastating to farmers is that some of these foreign peaches have been purchased using taxpayer dollars and are being served to our students.” — Rich Hudgins, California Canning Peach Association

The bill has the support of farm labor and grower groups.

“I can say with certainty that this is the first joint press conference that growers and members of the Teamsters Union have held to rally support on an issue where we are allies,” Rich Hudgins, president and CEO of the California Canning Peach Association said.

He said imported peaches from places like Greece and China constitute one of his industry’s “biggest threats.”

“What is devastating to farmers is that some of these foreign peaches have been purchased using taxpayer dollars and are being served to our students,” Hudgins said.

Ashely Alvarado with the Teamsters Local 856 says it is about health and safety, and job protection.

The governor’s office is not tipping its hand.

“As with all measures that reach the Governor’s desk, the bill will be evaluated on its merits,” a spokesperson emailed GV Wire.

The deadline for Newsom is sign or veto bills is September 30.