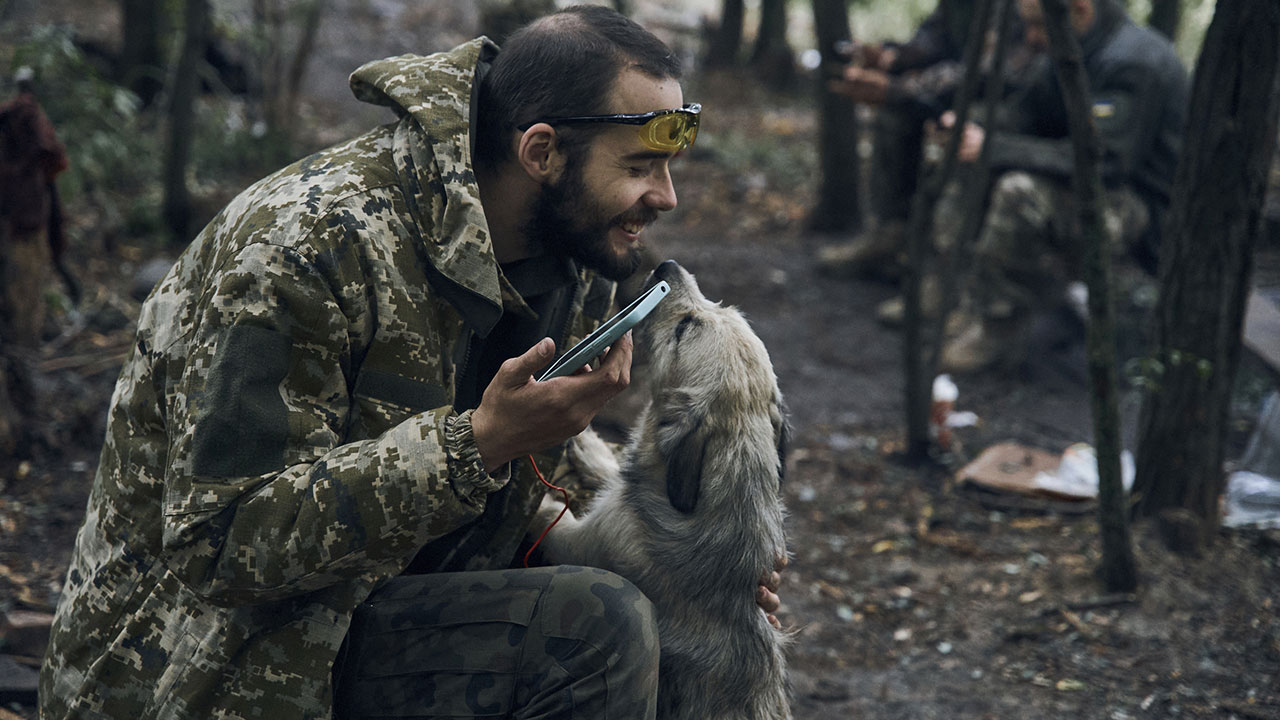 A Ukrainian soldier plays with a dog as he has a rest in freed territory, Monday, Sept. 12, 2022. (AP/Kostiantyn Liberov)
Share with friends

As the advance continued, Ukraine’s border guard services said the army took control of Vovchansk — a town just 2 miles from Russia seized on the first day of the war. Russia acknowledged that it has withdrawn troops from areas in the northeastern region of Kharkiv in recent days.

It was not yet clear if the Ukrainian blitz, which unfolded after months of little discernible movement, could signal a turning point in the nearly seven-month war.

But the country’s officials were buoyant, releasing footage showing their forces burning Russian flags and inspecting abandoned, charred tanks. In one video, border guards tore down a poster that read, “We are one people with Russia.”

russia is trying to maintain its status as the largest supplier of military equipment for the Ukrainian army, and even to improve its status, knowing that lend-lease will soon come into effect.#UAarmy loves its trophy ammo 🏆 pic.twitter.com/2NMPAPPgP2

Momentum has switched back and forth before, and Ukraine’s American allies were careful not to declare a premature victory since Russian President Vladimir Putin still has troops and resources to tap.

In the face of Russia’s largest defeat since its botched attempt to capture Kyiv early in the war, Defense Ministry spokesman Igor Konashenkov said troops were hitting back with “massive strikes” in all sectors. But there were no immediate reports of a sudden uptick in Russian attacks.

Late Monday, President Volodymyr Zelenskyy said his troops had so far retaken more than 2,300 square miles — an area more than twice the size of Luxembourg — in a matter of weeks.

“The movement of our troops continues,” he said.

Reports of chaos abounded as Russian troops pulled out — as well as claims that they were surrendering en masse. The claims could not be immediately verified.

Ukrainian Deputy Minister of Defense Hanna Maliar said Kyiv is trying to persuade even more Russian soldiers to give up, launching shells filled with flyers ahead of their advance.

“Russians use you as cannon fodder. Your life doesn’t mean anything for them. You don’t need this war. Surrender to Armed Forces of Ukraine,” the flyers read.

While dozens of towns and villages were liberated, authorities moved into several areas to investigate alleged atrocities against civilians by Russian troops.

The Kharkiv regional prosecutor’s office said four bodies bearing signs of torture were found in the village of Zaliznychne. It’s not clear how many other places investigators have entered.

Oleksandr Shtupun, a spokesman for the Ukrainian military’s general staff, accused Russian forces of committing hundreds of war crimes in territory they once held. He said the danger of minefields in liberated towns and villages remained high, and ammunition and high explosives have been strewn across 27,000 square miles.

“The defense forces are taking measures to return peaceful life to the liberated communities as soon as possible,” he said. 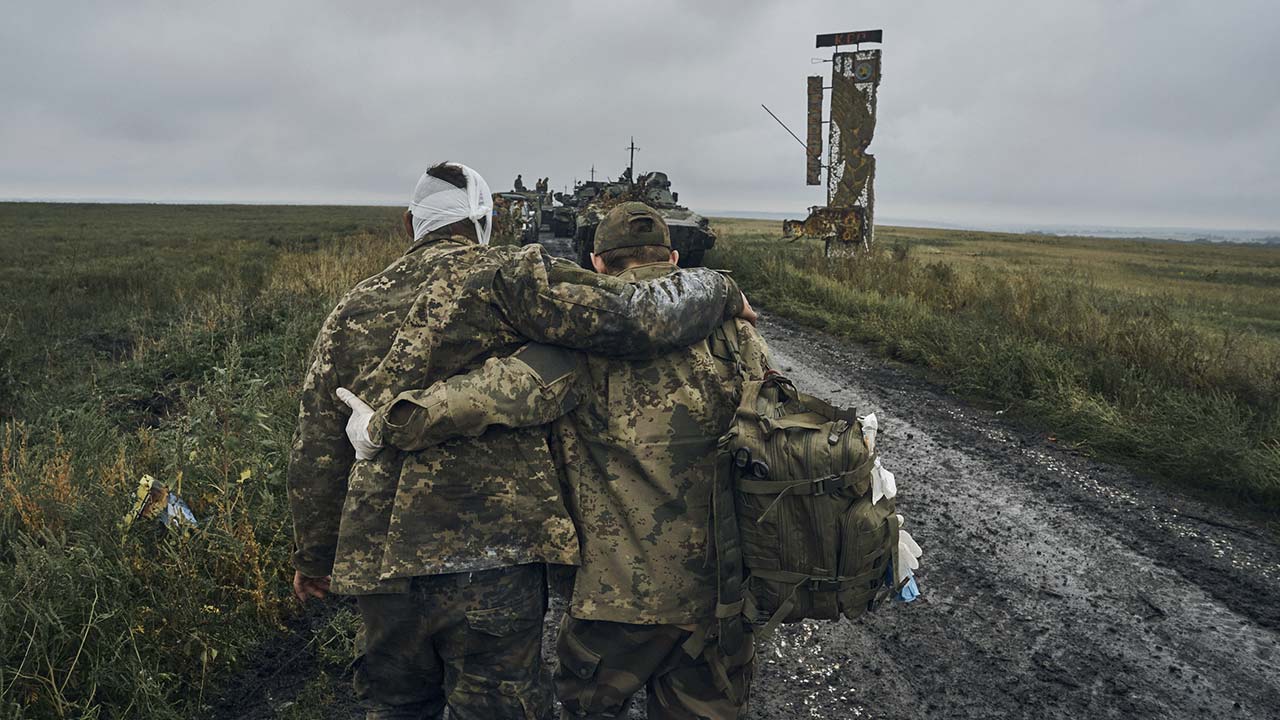 A Ukrainian soldier helps a wounded fellow soldier on the road in the freed territory in the Kharkiv region, Ukraine, Monday, Sept. 12, 2022. Ukrainian troops retook a wide swath of territory from Russia on Monday, pushing all the way back to the northeastern border in some places, and claimed to have captured many Russian soldiers as part of a lightning advance that forced Moscow to make a hasty retreat. (AP/Kostiantyn Liberov)

In one indication of the blow sustained by Moscow, British intelligence said that one premier force, the 1st Guards Tank Army, had been “severely degraded” during the invasion and that conventional Russian forces designed to counter NATO have been badly weakened.

“It will likely take years for Russia to rebuild this capability,” the analysts said.

But even if Putin were to sit down at the negotiating table, Zelenskyy has made it clear that Russia must return all Ukrainian territory, including Crimea, Gallyamov said.

The retreat did not stop Russia from pounding Ukrainian positions. Early Tuesday, it shelled the city of Lozova in the Kharkiv region, killing three people and injuring nine, said regional Gov. Oleh Syniehubov.

And Ukrainian officials said Russia kept up shelling around Europe’s largest nuclear facility, where fighting has raised fears of a nuclear disaster. The Nikopol area, which is across the Dnieper River from the Zaporizhzhia nuclear power plant, was shelled six times during the night, but no injuries were immediately reported, said regional Gov. Valentyn Reznichenko.

Strikes have also continued unabated on the city of Kharkiv, Ukraine’s second-largest and one that has been hammered by artillery for months.

Zelenskyy specifically criticized Russia for targeting energy infrastructure in its attacks over the past days.

“Hundreds and thousands of Ukrainians found themselves in the dark — without electricity. Houses, hospitals, schools, communal infrastructure … sites that have absolutely nothing to do with the infrastructure of the armed forces of our country.”