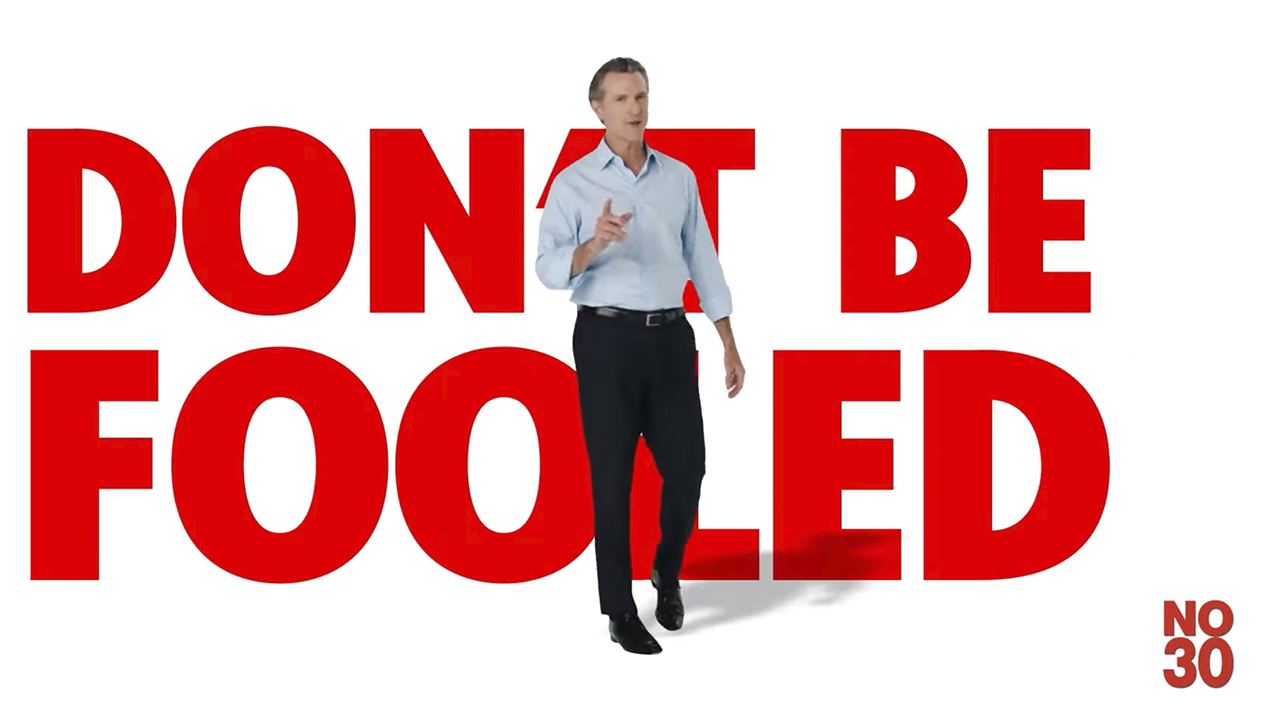 Gov. Gavin Newsom urges voters to reject Prop. 30, which would raise taxes on people who make more than $2 million a year. (No on 30)
Share with friends

SACRAMENTO — California Gov. Gavin Newsom wants voters to reject a new tax on rich people that would pay for more electric vehicles in the nation’s most populous state, warning in a new statewide TV ad that a measure on the ballot this November won’t help the environment but is instead “one company’s cynical scheme to grab a huge taxpayer subsidy.”

“Put simply, Prop. 30 is a trojan horse that puts corporate welfare above the fiscal welfare of our entire state.” — Gov. Gavin Newsom

Proposition 30 would raise taxes on people who make more than $2 million per year. It would generate up to $5 billion in new tax money each year, and most of that money would go to programs that help people buy electric cars and install charging stations. A smaller amount would go to wildfire prevention response and prevention programs.

The ballot measure’s campaign is paid for by the ride-hailing company Lyft. Last year, state regulators ordered companies like Lyft to make sure nearly all of their rides are in electric vehicles by 2030. Newsom says the ballot measure is Lyft’s attempt to make taxpayers pay for that.

“Don’t be fooled. Prop. 30’s been advertised as a climate initiative. But in reality, it was devised by a single corporation to funnel state income taxes to benefit their company,” Newsom says in the ad, which will air in all of the state’s major media markets. “Put simply, Prop. 30 is a trojan horse that puts corporate welfare above the fiscal welfare of our entire state.”

Newsom does not mention Lyft by name in the ad, but as he is speaking a headline from the San Francisco Chronicle is displayed in the background that says: “Why is Lyft bankrolling this California ballot measure on electric cars?”

Representatives for Lyft did not immediately respond to a request for comment on Monday.

Watch: Newsom Comes Out Against Prop. 30

Responding to the ad, the Yes on 30 campaign noted it is supported by lots of groups, including the American Lung Association and the California Democratic Party.

“It is disappointing that the Governor would side with the Californian Republican Party and a handful of San Francisco billionaires who would rather kids breathe toxic, polluted air than pay their fair share,” the campaign said in an email to The Associated Press.

“The opposition has never been able to point to any actual provision in the measure that provides a special benefit to Lyft or any other interest,” said Bill Magavern, policy director for the Coalition for Clean Air, one of the groups that crafted the measure. “The money would go to state agencies that the governor himself oversees and would fund existing programs that the governor himself funds through his budget.”

Newsom has been a big advocate for electric cars, approving more than $10 billion in new spending over the next several years to accelerate their adoption in California. Last month, California regulators approved new rules that will require new cars, pickup trucks, and SUVs be electric, hydrogen, or a gas-electric hybrid by 2035.

California law lets voters bypass the state Legislature to pass their own laws at the ballot box, typically resulting in several measures each year. It’s not unusual for governors to campaign for or against these measures. But it’s somewhat rare for governors to appear in TV ads speaking directly to voters about an issue not related to their own election campaigns.

“No one has more credibility on this issue than the governor,” said Matt Rodriguez, campaign manager for the No on 30 campaign. “I think you’re going to find the voters of California trust Gavin Newsom on what is the best way to go about addressing climate change.”

Newsom is being challenged in his re-election campaign this year by Brian Dahle, a little-known Republican state senator who hasn’t yet raised enough money to wage a strong statewide campaign. Free from the pressure of a well-funded challenger, the Newsom campaign has so far been spending its money on ads in other states that criticize the Republican governors of Florida and Texas.

Ukraine Reclaims More Territory, Running Out of Space for POWs