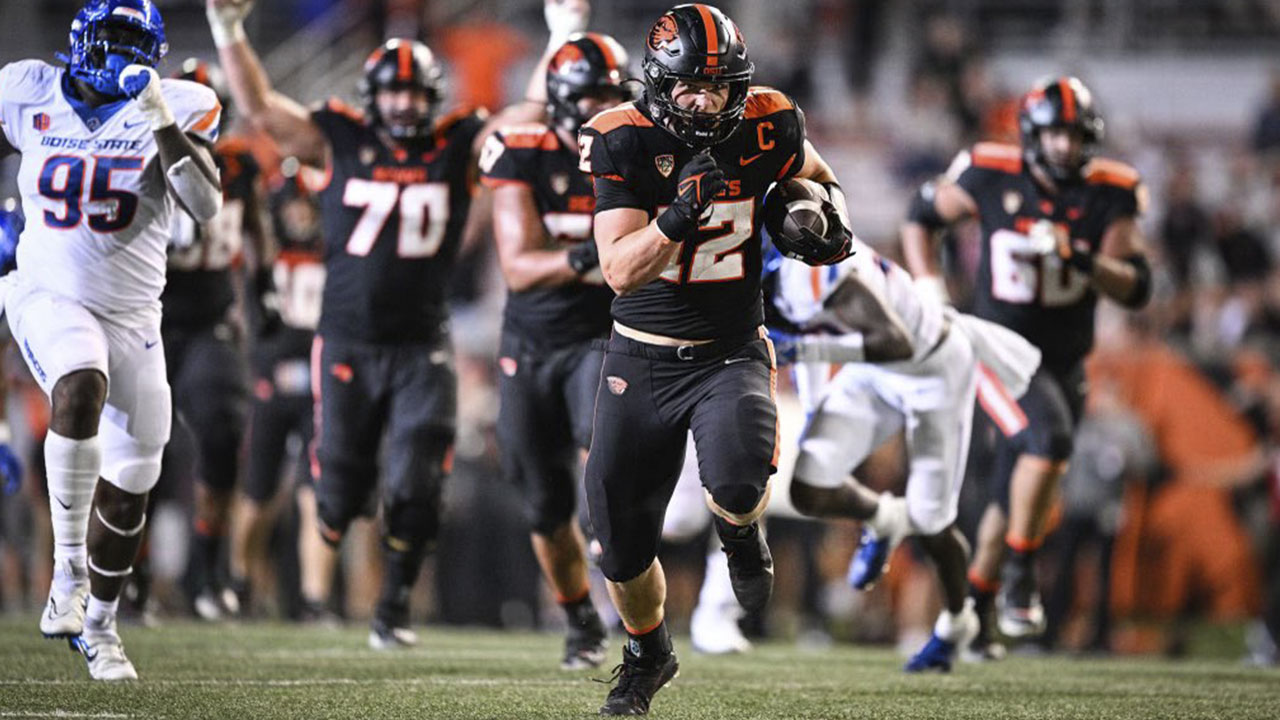 CORVALLIS, Ore. — When Oregon State coach Jonathan Smith introduced his first recruiting class in 2018, he made something of a prophetic statement about quarterback prospect Jack Colletto.

“He can do a lot of different things, moving, running, he throws it really well. Sharp kid,” Smith said at the time.

Turns out that Colletto really can do a lot of different things. He’s emerged as a rare two-way player for the Beavers, playing both at inside linebacker and at running back.

Sort of a Jack of all trades, you might say.

He was all over the field in Oregon State’s season-opening 34-17 victory over Boise State. He had three tackles and recovered a fumble on defense, and ran for a 41-yard touchdown on offense.

Related Story: How Fresno State Matches up Against Oregon State

With the season-opening win against Boise State in hand, the Beavers visit Fresno State (1-0) on Saturday. The Bulldogs won their opener 35-7 over Cal Poly.

“Not only can he play linebacker, but he plays fullback for them and does a really nice job. He had like a 43-yard touchdown run. He plays on special teams. He’s a big, physical player,” Tedford said. “More than anything I think on that is the intelligence it takes to play on both sides of the ball, to understand what you’re doing in the schemes that they’re running, offensively and defensively. It’s pretty impressive for a guy to do that.”

Came to Oregon State as a QB

Colletto, who is from Camus, Washington, played one season at Arizona Western College before arriving in Corvallis.

Considered a dual-threat, he was the third-string quarterback behind Jake Luton and Conor Blount for the 2018 season. Colletto switched to linebacker the next season but redshirted.

He solidified his role as a two-way player last season. He was the team’s go-to goal line rusher and finished with 144 years and four touchdowns. On defense, he had eight tackles, one forced fumble and an interception. He also caught a pass for a score, and on occasion served as a short-yardage wildcat QB.

Last year against USC, Colletto became the FBS first player to rush for two touchdowns and have an interception in the same game since 2004.

Smith said this wasn’t the plan when Colletto was recruited, but he showed skills in a lot of areas.

“He wanted to make the move, we made the move a year or two ago and he’s run with it,” Smith said following the victory over the Broncos. “He showed up on special teams, he’s in there at linebacker, obviously doing some things offensively, and so he’s a huge piece of this team.”

The Beavers, who have steadily improved since Smith’s arrival, were 7-6 last season and went to a bowl game for the first time since 2013.

Colletto, who already earned his bachelor’s degree in mechanical engineering, is making the most of his moment. He has started to sell “Jack Hammer” merchandise, including T-shirts, hats, and other apparel. A percentage of his sales will go to the Wounded Warrior Project.

“I had no idea this would be the way it panned out,” Colletto said about his journey. “But I’m happy and fortunate that this is really my path, and what I’m meant to do.”