A Passion for Singing. A Serenade for Fresno Baseball Fans.

Fresno summers have never dissuaded Charlie Glover from his passion — belting out tunes before, during, and after Fresno Grizzlies baseball games. 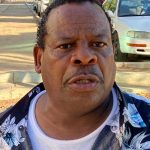 With an iPad as his DJ — Glover says he can go 10 hours at a time — the 61-year-old janitor serenades baseball fans with karaoke, from Elvis (his favorite to sing) to R&B, to pop hits — and everything in between.

“I come to entertain. Have a good time entertaining the people, the fans, which I’m a fan of the Grizzlies. I come here just to give my talent to the people so they can feel the way I feel when I sing. And I make a lot of people feel good,” Glover said.

For nearly every Grizzlies home game, Glover sets up across the street from Chukchansi Park. He has a table, an iPad on a stand, speakers, and lights.

Thus he plans to be there when the Grizzlies return home for the California League playoffs Thursday, Sept. 15.

A Passion for Singing and Cleaning

For Glover, performing — he is usually there by 5 p.m. and stays as fans leave when the game is over — is a respite before he goes to work cleaning buildings. Now he cleans a private business. Before, he worked for Fresno State and Fresno Unified.

Glover began singing outside Chukchansi Park before the pandemic. He used to sing while a partner played the saxophone. The partner disappeared, so Glover now uses a modern karaoke machine.

“Singing is something that soothes the soul of every human being. Even animals. Play some music and your pets recognize you and they recognize you happy while you’re singing. They are happy while playing the music,” Glover says.

Glover moved to Fresno when he was 3 years old. He went to local schools and his love for his hometown has never wavered.

EXPLAINER: Should You Get a New COVID Booster? If So, When?