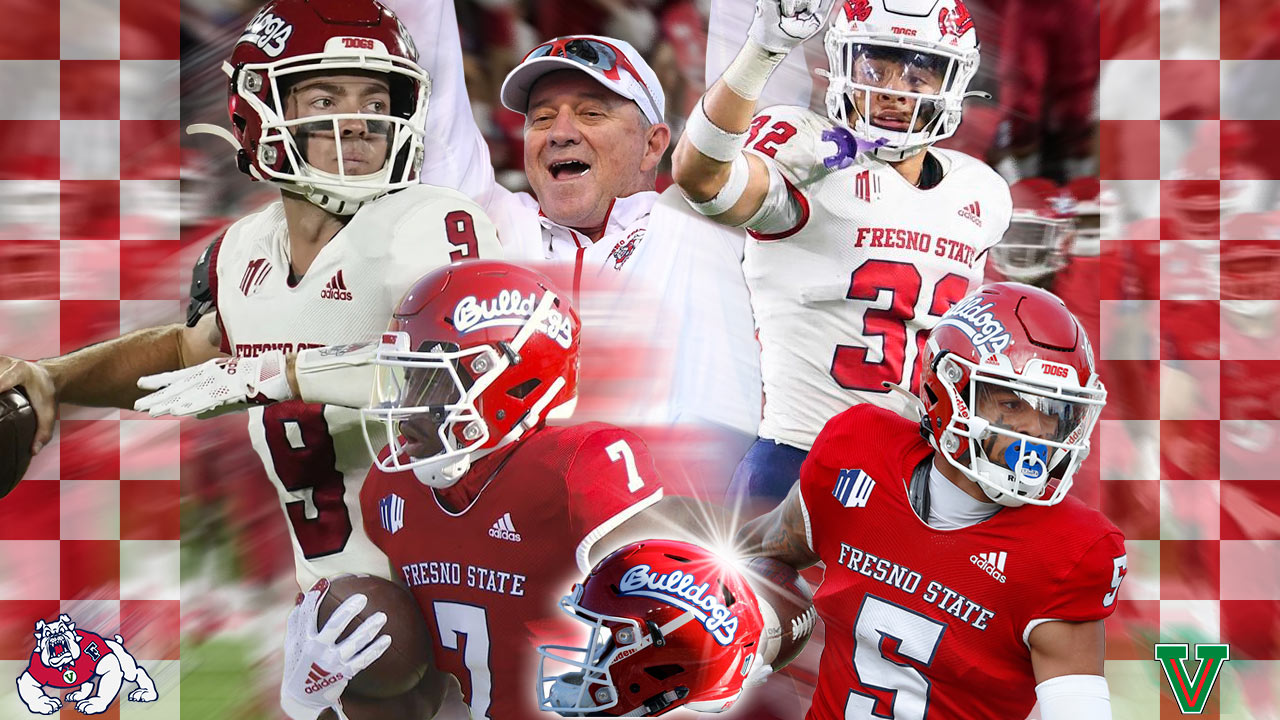 Will the Bulldogs be invited when college football moves to an NFL-style alignment? (GV Wire Composite/Paul Marshall)
Share with friends

As someone who has followed Fresno State football for more than 50 years, I can say unequivocally that this is the most important season in Bulldogs history.

The stakes have never been higher for the football program and our community’s place in collegiate sports.

That’s because the game is in hyper-revolution. Today’s players can reap pro-worthy paydays via name, image, and likeness rules. They can seek enhanced NIL opportunities, more playing time, and second chances to excel through the transfer portal. Meanwhile, universities have become free agents chasing the conferences with the biggest television contracts.

In case you missed it, the Big Ten — which will scoop up USC and UCLA in 2024 — recently signed a seven-year, $7 billion media rights deal with Fox, CBS, and NBC.

Illustrating the ever-widening great divide: the Mountain West, which includes Fresno State, is receiving $270 million over six years under its latest TV contract.

The Big Ten deal is the latest evidence that the upper ranks of college football will soon look a lot like an expanded version of the NFL. You might see 50 schools divided between the SEC and the Big Ten. Or the arrangement could involve up to 60 teams split into perhaps three conferences.

As ESPN college football analyst Kirk Herbstreit said when word broke that USC and UCLA were bolting the Pac-12, “I think there’s going to be some very tough decisions because (it’s) going to keep out a lot of teams that want to be a part of this future and they’re not going to be invited.”

Future of Fresno State Football Requires a Seat at the Table

Fresno State’s future hinges on earning that invitation. Without it, the university will struggle to keep football and the entire athletic department afloat.

So, how does Fresno State break out of the pack of wanna-be big-time schools and leap into a future of marquee rivals and huge paydays?

This year’s team is built to do that. Quarterback Jake Haener can sling the football all over the field to a receiving corps that includes the elusive Jalen Cropper. Jordan Mims is a bull of a running back who also is a capable receiver. Safety Evan Williams is a tackling machine, as well as a constant threat to pick off errant passes.

Coach Jeff Tedford clearly knows how important this season — his first back with the Bulldogs — is to Fresno State’s future. He has assembled an NFL-quality coaching staff that is the class of the Mountain West. These assistants, many with deep bonds to Fresno State, are here to win and win big right now. Not a year from now or at some other school.

Will the Bulldogs Have a Unique Story to Tell?

To have a fighting chance at inclusion when college football becomes the Saturday version of the NFL, Fresno State must regularly sell out Valley Children’s Stadium and also win at the ballot box on Nov. 8.

By then, the Bulldogs will have played nine games. We will know the outcomes of their high-profile matchups with USC, Boise State, Oregon State, and San Diego State. If Bulldogs football is the talk of the town, odds improve for voters passing the unique county sales tax proposal supporting Fresno State academics and athletics.

If Measure E passes, university leadership will have a remarkable story to tell as conference alignment shakes out. One that begins, “Our community is so invested in Fresno State that it taxed itself $720 million over the next 20 years to take us from good to great.”

The Bulldogs have had many big victories and record-setting seasons since I watched them beat Cal Poly, 14-7, before a full house of 13,000 on Oct. 15, 1966, at Ratcliffe Stadium.

Never have they had a challenge as important as the one before them now.