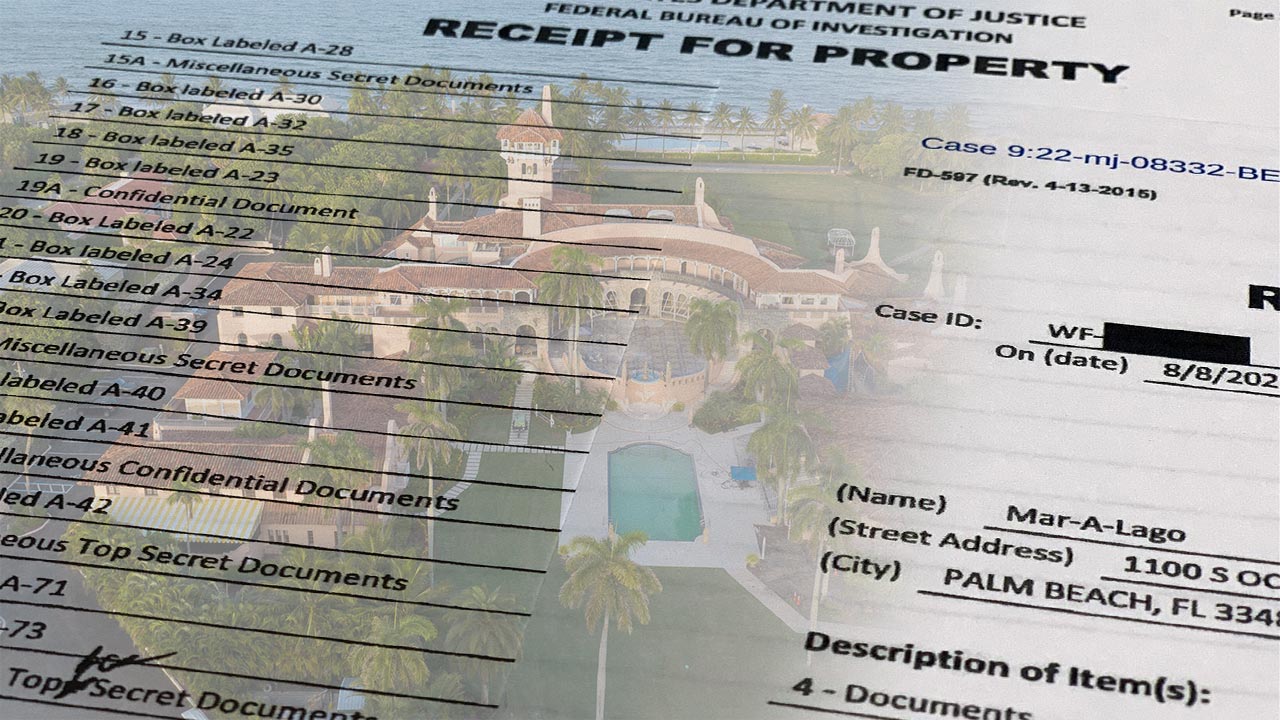 WASHINGTON — The FBI recovered “top secret” and even more sensitive documents from former President Donald Trump’s Mar-a-Lago estate in Florida, according to court papers released Friday after a federal judge unsealed the warrant that authorized the sudden, unprecedented search this week.

A property receipt unsealed by the court shows FBI agents took 11 sets of classified records from the estate during a search on Monday.

The seized records include some marked not only top secret but also “sensitive compartmented information,” a special category meant to protect the nation’s most important secrets that if revealed publicly could cause “exceptionally grave” damage to U.S. interests. The court records did not provide specific details about information the documents might contain.

The warrant says federal agents were investigating potential violations of three different federal laws, including one that governs gathering, transmitting or losing defense information under the Espionage Act. The other statutes address the concealment, mutilation or removal of records and the destruction, alteration or falsification of records in federal investigations.

The property receipt also shows federal agents collected other potential presidential records, including the order pardoning Trump ally Roger Stone, a “leatherbound box of documents,” and information about the “President of France.” A binder of photos, a handwritten note, “miscellaneous secret documents” and “miscellaneous confidential documents” were also seized in the search.

Trump’s attorney, Christina Bobb, who was present at Mar-a-Lago when the agents conducted the search, signed two property receipts — one that was two pages long and another that is a single page.

In a statement earlier Friday, Trump claimed that the documents seized by agents were “all declassified,” and argued that he would have turned them over if the Justice Department had asked.

To read more stories on Trump-related investigations, go to this link. 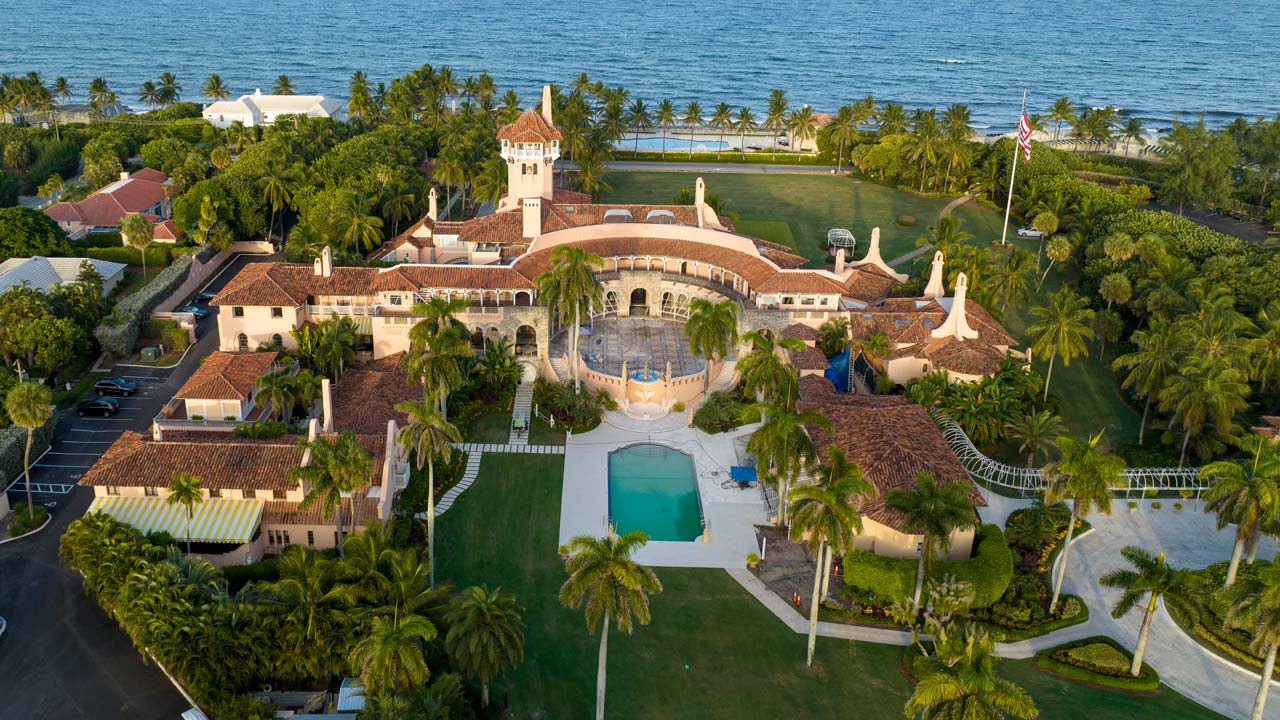 While incumbent presidents generally have the power to declassify information, that authority lapses as soon as they leave office and it was not clear if the documents in question have ever been declassified. And even an incumbent’s powers to declassify may be limited regarding secrets dealing with nuclear weapons programs, covert operations, and operatives, and some data shared with allies.

Trump kept possession of the documents despite multiple requests from agencies, including the National Archives, to turn over presidential records in accordance with federal law.

The Mar-a-Lago search warrant served Monday was part of an ongoing Justice Department investigation into the discovery of classified White House records recovered from Trump’s home earlier this year. The Archives had asked the department to investigate after saying 15 boxes of records it retrieved from the estate included classified records.

It remains unclear whether the Justice Department moved forward with the warrant simply as a means to retrieve the records or as part of a wider criminal investigation. Multiple federal laws govern the handling of classified information, with both criminal and civil penalties, as well as presidential records.

U.S. Magistrate Judge Bruce Reinhart, the same judge who signed off on the search warrant, unsealed the warrant and property receipt Friday at the request of the Justice Department after Attorney General Merrick Garland declared there was “substantial public interest in this matter,” and Trump said he backed the warrant’s “immediate” release. The Justice Department told the judge Friday afternoon that Trump’s lawyers did not object to the proposal to make it public.

In messages posted on his Truth Social platform, Trump wrote, “Not only will I not oppose the release of documents … I am going a step further by ENCOURAGING the immediate release of those documents.”

The Justice Department’s request was striking because such warrants traditionally remain sealed during a pending investigation. But the department appeared to recognize that its silence since the search had created a vacuum for bitter verbal attacks by Trump and his allies, and felt that the public was entitled to the FBI’s side about what prompted Monday’s action at the former president’s home.

“The public’s clear and powerful interest in understanding what occurred under these circumstances weighs heavily in favor of unsealing,” said a motion filed in federal court in Florida on Thursday.

The information was released as Trump prepares for another run for the White House. During his 2016 campaign, he pointed frequently to an FBI investigation into his Democratic opponent, Hillary Clinton, over whether she mishandled classified information.

To obtain a search warrant, federal authorities must prove to a judge that probable cause exists to believe that a crime was committed. Garland said he personally approved the warrant, a decision he said the department did not take lightly given that standard practice where possible is to select less intrusive tactics than a search of one’s home.

In this case, according to a person familiar with the matter, there was substantial engagement with Trump and his representatives prior to the search warrant, including a subpoena for records and a visit to Mar-a-Lago a couple of months ago by FBI and Justice Department officials to assess how the documents were stored. The person was not authorized to discuss the matter by name and spoke on condition of anonymity.

FBI and Justice Department policy cautions against discussing ongoing investigations, both to protect the integrity of the inquiries and to avoid unfairly maligning someone who is being scrutinized but winds up ultimately not being charged. That’s especially true in the case of search warrants, where supporting court papers are routinely kept secret as the investigation proceeds.

In this case, though, Garland cited the fact that Trump himself had provided the first public confirmation of the FBI search, “as is his right.” The Justice Department, in its new filing, also said that disclosing information about it now would not harm the court’s functions.

The Justice Department under Garland has been leery of public statements about politically charged investigations, or of confirming to what extent it might be investigating Trump as part of a broader probe into the Jan. 6 riot at the U.S. Capitol and efforts to overturn the results of the 2020 election.

The department has tried to avoid being seen as injecting itself into presidential politics, as happened in 2016 when then-FBI Director James Comey made an unusual public statement announcing that the FBI would not be recommending criminal charges against Clinton regarding her handling of email — and when he spoke up again just over a week before the election to notify Congress that the probe was being effectively reopened because of the discovery of new emails. 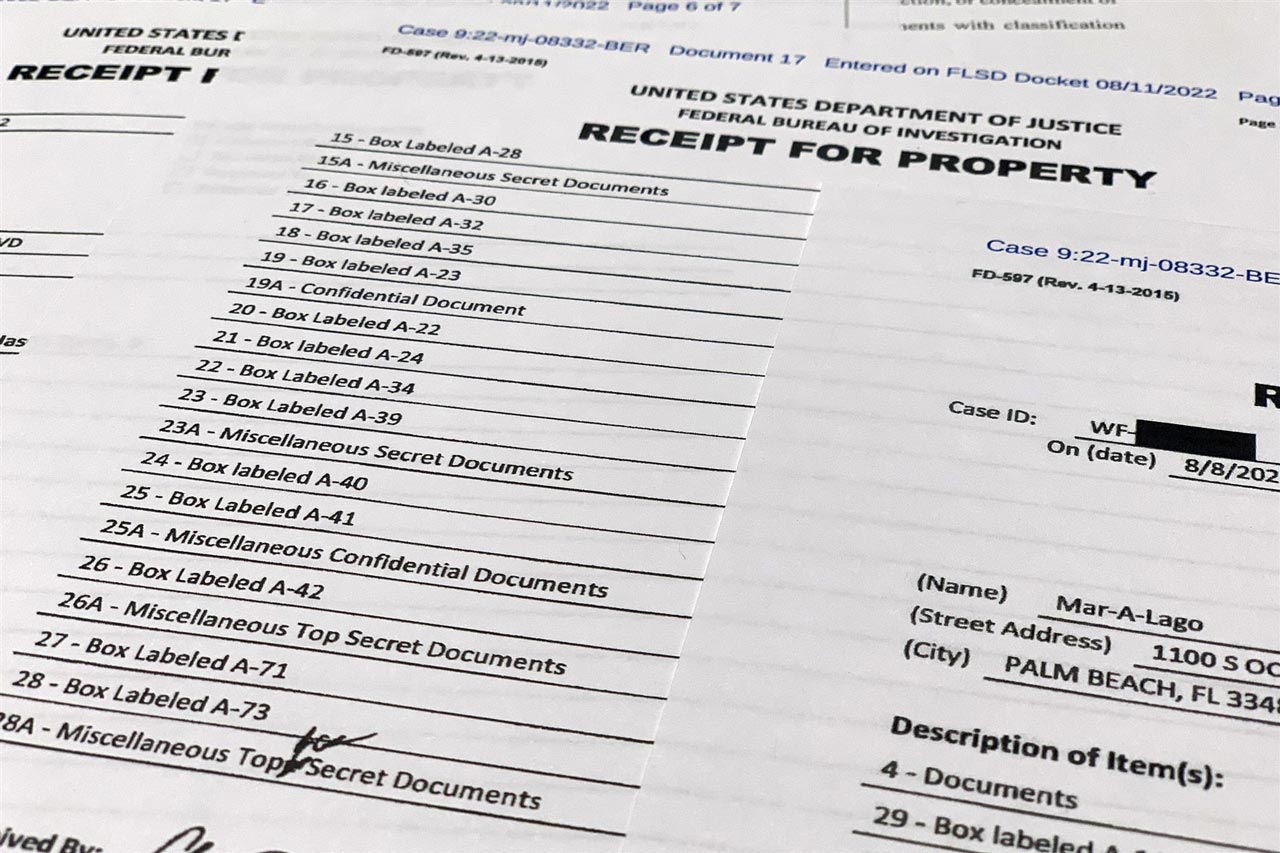 A photograph of the receipt for property seized during the execution of a search warrant by the FBI at former President Donald Trump’s Mar-a-Lago estate in Palm Beach, Fla. (AP /Jon Elswick)

The attorney general also condemned verbal attacks on FBI and Justice Department personnel over the search. Some Republican allies of Trump have called for the FBI to be defunded. Large numbers of Trump supporters have called for the warrant to be released hoping they it will show that Trump was unfairly targeted.

“I will not stand by silently when their integrity is unfairly attacked,” Garland said of federal law enforcement agents, calling them “dedicated, patriotic public servants.”

Earlier Thursday, an armed man wearing body armor tried to breach a security screening area at an FBI field office in Ohio, then fled and was later killed after a standoff with law enforcement. A law enforcement official briefed on the matter identified the man as Ricky Shiffer and said he is believed to have been in Washington in the days leading up to the attack on the Capitol and may have been there on the day it took place.