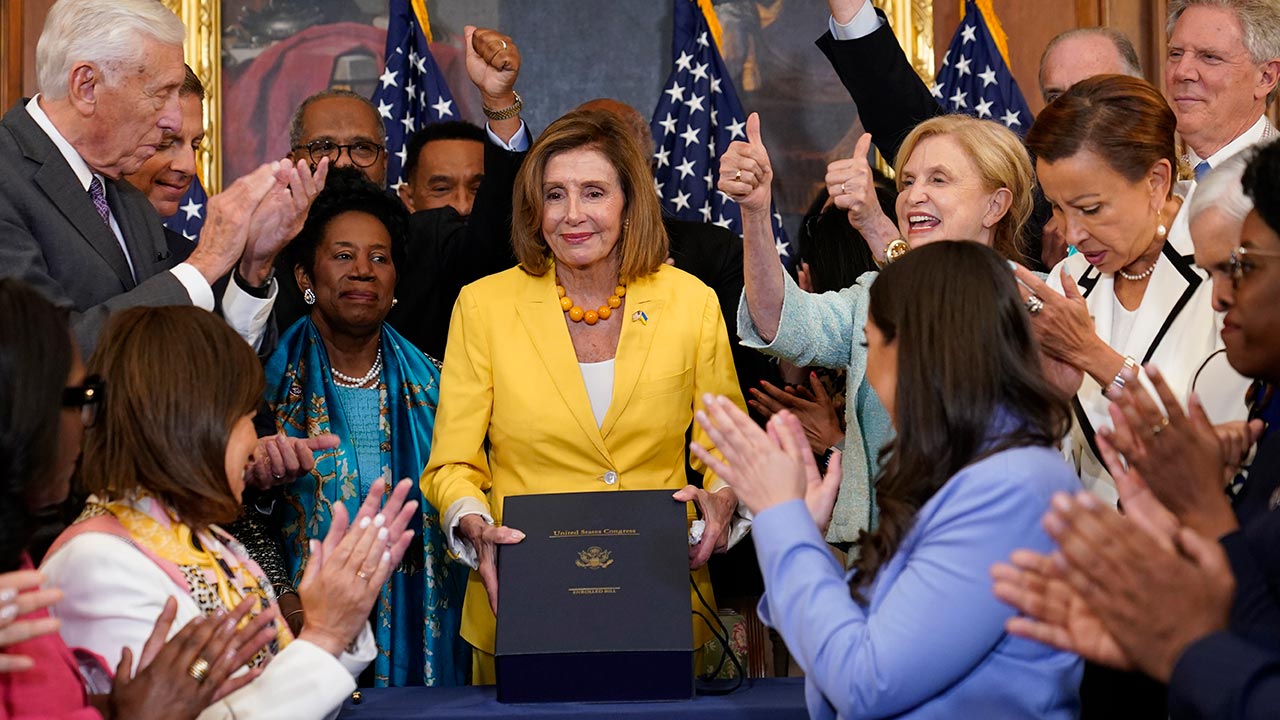 House Speaker Nancy Pelosi is surrounded by Democrats after signing the Inflation Reduction Act of 2022 on Friday, Aug. 12, 2022. (AP/Susan Walsh)
Share with friends

WASHINGTON — A divided Congress gave final approval Friday to Democrats’ flagship climate and healthcare bill, handing President Joe Biden a back-from-the-dead triumph on coveted priorities that the party hopes will bolster their prospects for keeping their House and Senate majorities in November’s elections.

The House used a party-line 220-207 vote to pass the legislation, prompting hugs among Democrats on the House floor and cheers by White House staff watching on television. “Today, the American people won. Special interests lost,” tweeted the vacationing Biden, who was shown beaming in a White House photo as he watched the vote on TV from Kiawah Island, South Carolina. He said he would sign the legislation next week.

What Costa, Conway Say About the Bill

The bill “delivers transformative investments to the American people, including cutting healthcare costs, protecting our planet, and reducing rising inflation hurting consumers,” said Rep. Jim Costa (D-Fresno) in a news release. “This bill cuts the deficit, and will not raise taxes on residents, families, or small businesses in my district. I am proud to pass legislation that will cut kitchen table costs for Americans.”

However, Rep. Connie Conway (R-Tulare) criticized the bill’s passage, saying that “raising taxes, expanding the IRS, and spending a half-trillion dollars when our nation is $30 trillion in debt is an absurd response to our economic challenges. Moreover, the Democrats’ claim that these self-defeating policies will lower inflation is an insult to the intelligence of the American people.”

Related Story: Ian Bremmer: Explaining Inflation & What’s Next for the US Economy

The measure is but a shadow of the larger, more ambitious plan to supercharge environment and social programs that Biden and his party unveiled early last year. Even so, Democrats happily declared victory on top-tier goals like providing Congress’ largest ever investment in curbing carbon emissions, reining in pharmaceutical costs and taxing large companies, hoping to show they can wring accomplishments from a routinely gridlocked Washington that often disillusions voters.

“Today is a day of celebration, a day we take another giant step in our momentous agenda,” said House Speaker Nancy Pelosi, D-Calif., who minutes later announced the final vote as she presided over the chamber. She said the measure “meets the moment, ensuring that our families thrive and that our planet survives.”

Republicans solidly opposed the legislation, calling it a cornucopia of wasteful liberal daydreams that would raise taxes and families’ living costs. They did the same Sunday but Senate Democrats banded together and used Vice President Kamala Harris’ tiebreaking vote to power the measure through that 50-50 chamber.

Still, the final legislation remained substantive. Its pillar is about $375 billion over 10 years to encourage industry and consumers to shift from carbon-emitting to cleaner forms of energy. That includes $4 billion to cope with the West’s catastrophic drought.

Related Story: Zakaria: Biden Is Showing That Governing From the Middle Is Possible

Another $64 billion would help 13 million people pay premiums over the next three years for privately bought health insurance. Medicare would gain the power to negotiate its costs for pharmaceuticals, initially in 2026 for only 10 drugs. Medicare beneficiaries’ out-of-pocket prescription costs would be limited to $2,000 starting in 2025, and beginning next year would pay no more than $35 monthly for insulin, the costly diabetes drug.

The bill would raise around $740 billion in revenue over the decade, over a third from government savings from lower drug prices. More would flow from higher taxes on some $1 billion corporations, levies on companies that repurchase their own stock and stronger IRS tax collections. About $300 billion would remain to defray budget deficits, a sliver of the period’s projected $16 trillion total.

The GOP also says the bill would raise taxes on lower- and middle-income families. An analysis by Congress’ nonpartisan Joint Committee on Taxation, which didn’t include the bill’s tax breaks for health care and energy, estimated that the corporate tax boosts would marginally affect those taxpayers but indirectly, partly due to lower stock prices and wages.