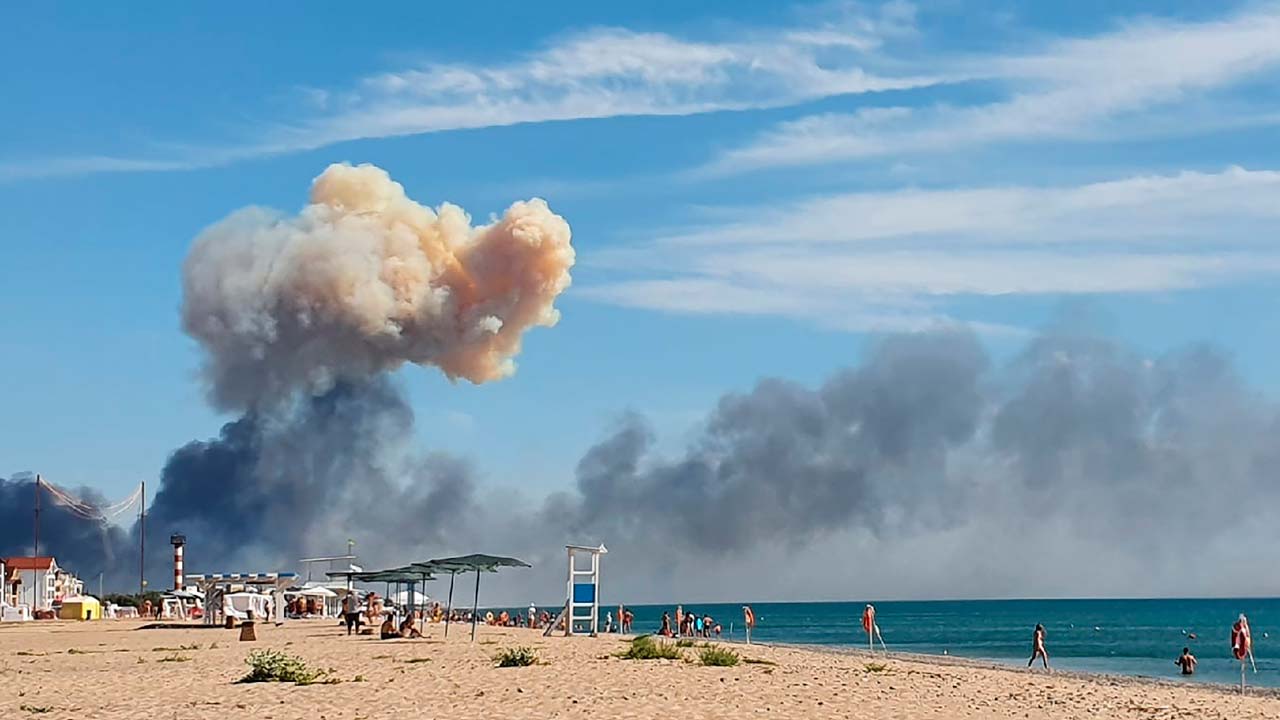 Former Trump administration National Security Director John Bolton has been among the most hawkish critics of the Iran nuclear deal. (GV Wire File)
Share with friends

Ukraine’s air force said Wednesday that nine Russian warplanes were destroyed in a deadly string of explosions at an air base in Crimea, amid speculation the blasts were the result of a Ukrainian attack that would represent a significant escalation in the war.

Russia denied any aircraft were damaged in Tuesday’s blasts — or that any attack took place.

Ukrainian officials stopped short of publicly claiming responsibility for the explosions, while mocking Russia’s explanation that a careless smoker might have caused ammunition at the Saki air base to catch fire and blow up. Analysts also said that explanation doesn’t make sense and that the Ukrainians could have used anti-ship missiles to strike the base.

If Ukrainian forces were, in fact, responsible for the blasts, it would be the first known major attack on a Russian military site on the Crimean Peninsula, which was seized from Ukraine by the Kremlin in 2014. Russian warplanes have used Saki to strike areas in Ukraine’s south.

Crimea holds huge strategic and symbolic significance for both sides. The Kremlin’s demand that Ukraine recognize Crimea as part of Russia has been one of its key conditions for ending the fighting, while Ukraine has vowed to drive the Russians from the peninsula and all other occupied territories.

Hours after the blasts, Ukrainian President Volodymyr Zelenskyy promised again to do just that.

“This Russian war against Ukraine and against all of free Europe began with Crimea and must end with Crimea — its liberation,” he said in his nightly address.

The explosions, which killed one person and wounded 14, sent tourists fleeing in panic as plumes of smoke rose over the coastline nearby. Video showed shattered windows and holes in the brickwork of some buildings.

One tourist, Natalia Lipovaya, said that “the earth was gone from under my feet” after the powerful blasts. “I was so scared,” she said.

Sergey Milochinsky, a local resident, recalled hearing a roar and seeing a mushroom cloud from his window. “Everything began to fall around, collapse,” he said.

Crimea’s regional leader, Sergei Aksyonov, said some 250 residents were moved to temporary housing after dozens of apartment buildings were damaged.

But Russian authorities sought to downplay the explosions on Wednesday, saying all hotels and beaches were unaffected on the peninsula, which is a popular tourist destination for many Russians.

A Ukrainian presidential adviser, Oleksiy Arestovych, cryptically said that the blasts were either caused by a Ukrainian-made long-range weapon or the work of Ukrainian guerrillas operating in Crimea.

“Official Kyiv has kept mum about it, but unofficially the military acknowledges that it was a Ukrainian strike,” Ukrainian military analyst Oleh Zhdanov said.

The base on the Black Sea peninsula, which dangles off southern Ukraine, is at least 200 kilometers (some 125 miles) from the closest Ukrainian position — out of the range of the missiles supplied by the U.S. for use in HIMARS launchers.

Ukraine has repeatedly urged Washington to deliver longer-range missiles for HIMARS that can strike targets up to 300 kilometers (about 185 miles) away. The White House has rejected that out of concern it could trigger a wider war.

The explosions raised speculation that Ukraine had finally gotten the long-range weapons, but U.S. congressional staffers said that they knew of no such missiles supplied by the United States.

The Washington-based Institute for the Study of War said it couldn’t independently determine what caused the explosions but noted that simultaneous blasts in two places at the base probably rule out an accidental fire, but not sabotage or a missile attack.

But it added: “The Kremlin has little incentive to accuse Ukraine of conducting strikes that caused the damage since such strikes would demonstrate the ineffectiveness of Russian air defense systems.”

During the war, the Kremlin has reported numerous fires and explosions on Russian territory near the Ukrainian border, blaming some of them on Ukrainian strikes. Ukrainian authorities have mostly kept silent about the incidents, preferring to keep the world guessing.

In other developments, Russian forces shelled areas across Ukraine on Tuesday night into Wednesday, including the central region of Dnipropetrovsk, where 13 people were killed, according to the region’s governor, Valentyn Reznichenko.

Reznichenko said the Russians fired at the city of Marganets and a nearby village. Dozens of residential buildings, two schools and several administrative buildings were damaged.

“It was a terrible night,” Reznichenko said. “It’s very hard to take bodies from under debris. We are facing a cruel enemy who engages in daily terror against our cities and villages.”

Russian forces also continued shelling the city of Nikopol across the Dnieper River from the Russian-occupied Zaporizhzhia nuclear power plant. It is the biggest nuclear plant in Europe. Ukraine and Russia have accused each other of shelling it, stoking international fears of a catastrophe.

On Wednesday, foreign ministers of the Group of Seven industrialized democracies demanded that Russia immediately hand back full control of the plant to Ukraine. They said they are “profoundly concerned” about the risk of a nuclear accident with far-reaching consequences.