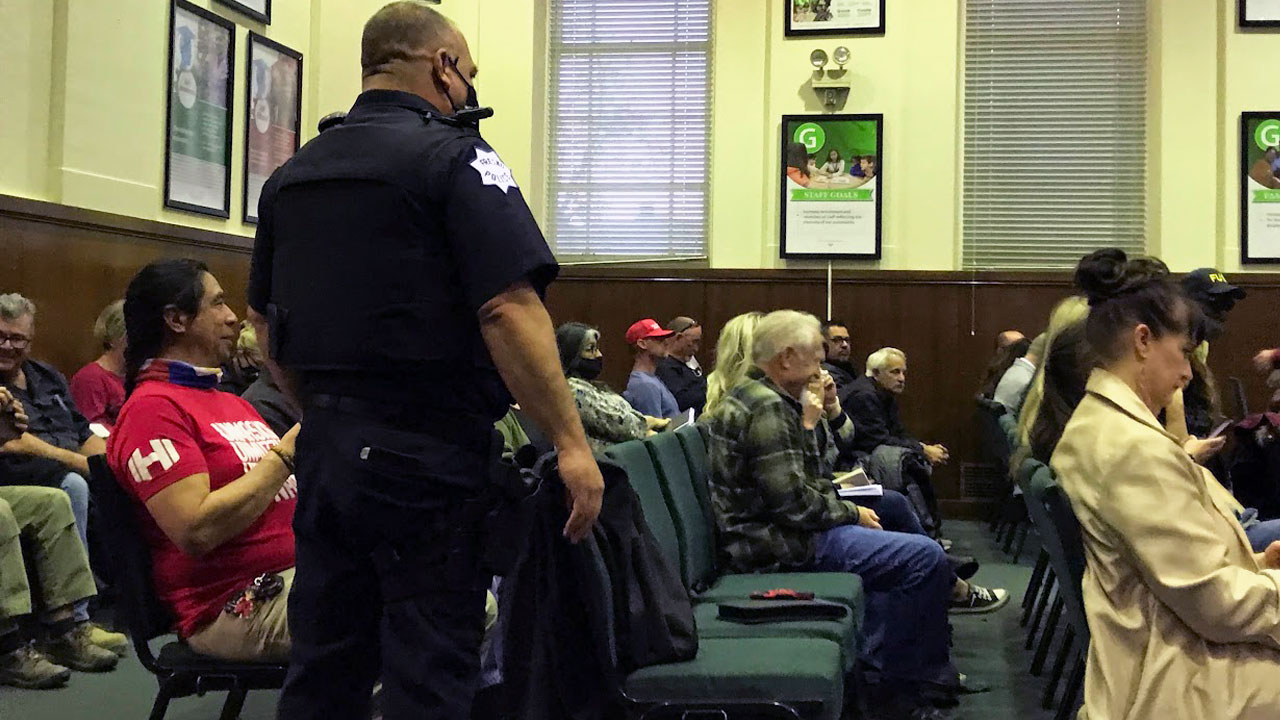 It’s become a familiar scene at public meetings in California and across the nation — speakers or members of the public who, determined to have their voices heard, wind up disrupting public meetings.

State Senate Bill 1100 aims to give councils and boards in California more clout when it comes to dealing with people who intentionally are disruptive and keep elected officials from doing the public’s business.

But one Fresno area school board member wonders whether the lack of specificity could wind up causing more confusion. And a longtime critic of Fresno Unified questions whether the law will hold up under a legal challenge.

Fresno Unified School Board President Elizabeth Jonasson Rosas said her first question about SB 1100 was, “does it apply to board members?” She was referring to Trustee Terry Slatic’s outbursts at board meetings that contributed to early adjournments.

Is prolonged clapping considered disruptive? What about holding signs that block the views of public members trying to see sign language interpreters? Jonasson Rosas said she suspects that even if Gov. Gavin Newsom signs SB 1100 into law, boards and the police officers assigned to provide security at meetings will continue to walk a tightrope between allowing the public to express their views and the need to keep meetings moving along on their agendas.

Based on her limited knowledge of SB1100, Jonasson Rosas said, the bill appears to provide more legal support to what most boards already are doing, which is to warn disruptive speakers before seeking to have them removed.

SB 1100 passed the Assembly and is awaiting concurrence by the Senate on some Assembly amendments before being finalized and moving on to the governor’s desk, Tara Sreekrishnan, spokeswoman for Sen. Dave Cortese, D-San Jose, the bill’s author, said Tuesday.

It’s already causing a flurry of protest among Assembly Republicans, who have labeled it an “assault on parents” by Democrats. “This bill is a direct attack on parents coming to their school board meetings and voicing their passionate displeasure with how our schools have been managed. Regardless of this bill, a parent revolution is coming this fall,” Assembly Republican Leader James Gallagher of Yuba City warned Tuesday in a statement.

Tiffany Stoker Madsen, president of the Clovis Unified School Board, told GV Wire she hasn’t yet had a chance to look the bill over thoroughly but offered this comment by text: “I know our board listens to, values, and considers public comments and we are trying hard to create an environment in the board room where all feel welcome and safe to give input.”

Central Unified School Board president Richard Solis did not immediately respond to a request for comment Tuesday. Central Unified later Tuesday issued the following emailed statement: “We know that our Board wants our community to be involved and participate in Board meetings. As per our Board policy, we will continue to enforce code of conduct when someone is speaking to the Board so that public comments can be heard, and the Board of Trustees may conduct business. Our understanding of SB 1100 is that it supports our current practice.”

While the law is not specifically designed for school board meetings, they have been the locus of public passion, criticism, and anger, much of which was sparked during the pandemic and has continued since. Anger over closed schools, mask requirements, and the potential for a vaccine mandate caused parents and community members to fill seats in board rooms and sign up for an opportunity to comment. When that public comment time is limited on a per-speaker basis out of time considerations, speakers have become irate and refused to relinquish the podium, sometimes shouting even as the microphone is switched off and they are asked to retake their seats.

At recent meetings of the Central Unified School Board, for example, Solis employed the “three strikes and you’re out” method of trying to maintain control of meetings, issuing first, second, and third warnings to speakers who refused to yield and sit down. After the third warning, Solis directed security to escort speakers out of the auditorium.

SB 1100 would give board leaders like Solis the ability to issue a single warning before seeking to have a speaker ejected from a meeting: “Prior to removing an individual, the presiding member or their designee shall warn the individual that their behavior is disrupting the meeting and that their failure to cease their behavior may result in their removal. The presiding member or their designee may then remove the individual if they do not promptly cease their disruptive behavior.”

Jonasson Rosas said she wishes the proposed law had more specificity as to what would constitute a disruption. The current language says only that “‘Disrupting’ means engaging in behavior during a meeting of a legislative body that actually disrupts, disturbs, impedes, or renders infeasible the orderly conduct of the meeting.”

There is already case law in California concerning the ability of public officials to eject disruptive individuals during meetings. In Acosta v. City of Costa Mesa, the courts found that the city ordinance governing decorum during council meetings was not overly broad if it allowed a presiding officer to eject someone for actually disturbing or impeding a meeting, and not just for violating any rules of decorum.

In Support and Opposition

SB 1100 is supported by numerous groups, including the California State Association of Counties and Urban Counties of California who wrote that the bill “provides commonsense tools for local agencies to deal with the rising hostility and intimidation occurring during public meetings and ensure the efficient and effective conduct of the public’s business. At the same time, the bill safeguards the public’s right to address its elected leaders in public meetings under reasonable conduct requirements.”

But Californians for Good Governance, one of the groups and many individuals opposing the bill, said the bill was too vague for meaningful guidance and would open the door to restricting freedom of speech and the freedoms guaranteed by the Brown Act, including the freedom to be critical. “The reality is that participatory democracy is a messy business, but limiting public input is not the answer as it moves our government towards authoritarianism and away from democracy.”

Andrew Fabela, a longtime and vocal critic of Fresno Unified, said he believes that SB 1100 could be used to squelch dissent. He’s convinced that it would not stand up to a court challenge, based on past judicial decisions that include Cohen v. California, which said that people could not be criminalized for public use of profane language.

The Supreme Court’s ruling in the Cohen case in effect said that “one person’s cursing is another lyric,” Fabela said. “This (SB 1100) is the first step toward censorship.”