Will Fresno Ever Re-Open the Popular Airways Pool? 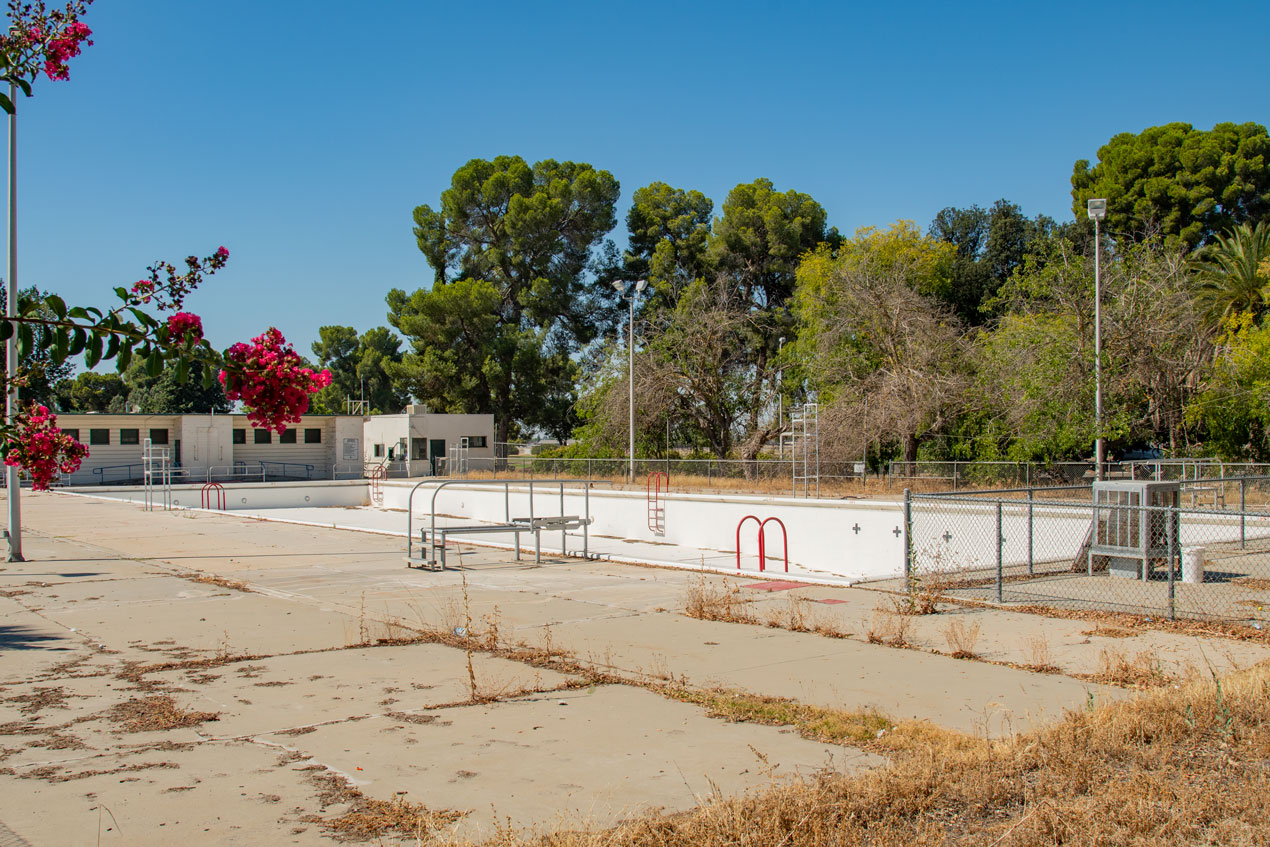 Airways Pool near the Fresno airport was once a place where residents of all ages went to keep cool. (GV Wire/Albert Baker)
Share with friends

For decades, the Airways Pool offered a respite from Fresno’s sizzling summer heat to families from across the city.

And while the city has built partnerships with local high schools since Airways’ closing in 2017, none of them comes close to offering the low-cost experience that Airways did.

Fresno resident, Donna Mott, 64, recalls frequenting the pool as child in the late 1960s  to early Seventies during the summer.

“It was well attended, always full, and it was only a quarter to get in,” said Mott. “I went pretty often during the summer months … maybe five days out of seven.”

Mott remembers the pool as being different than what most recreational pools now offer.

Unlike the community pools that are only open for a few hours a day, Airways was a place anyone could go to hang out with friends and stay cool.

Mott says there were lifeguards around watching everyone attentively, but almost everyone knew how to swim and very few people actually required swimming lessons. Additionally, there was a small wading pool for kids overseen by a lifeguard.

“There was a great snack bar with hot dogs and hamburgers, and just music playing,” said Mott. “There was a very big high dive and then another diving board.”

Mott no longer frequents community pools, but recently she had an urge to take her grandson to the Airways Pool only to realize that it was no longer open.

“I went by and looked at it. I had my grandson with me and I thought it would still be a fun thing to do, and then it was closed and I was so sad and surprised,” said Mott. “It’s a nice memory for those of us who were there, but there’s just no going back in time.” 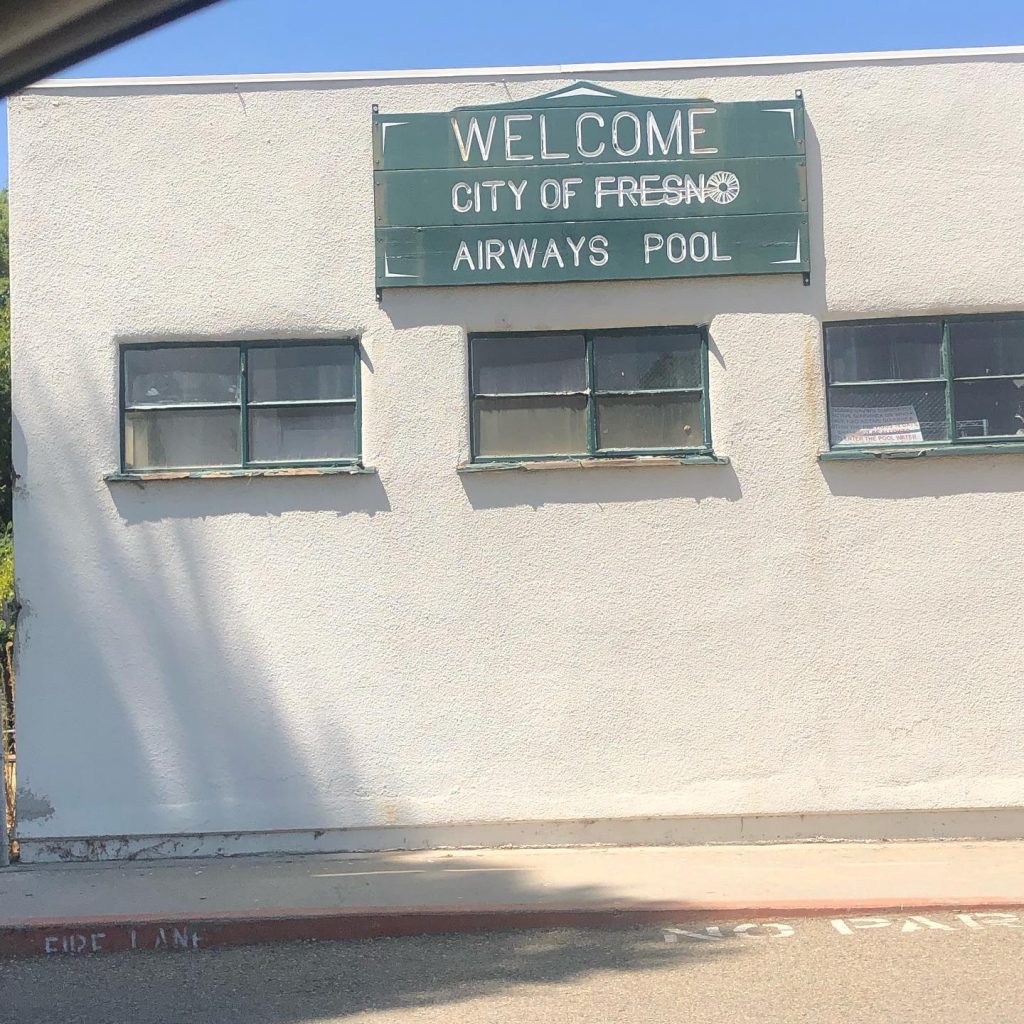 Airways Pool was closed down by the city, which cited high renovation costs. (Donna Mott)

Why Did the Airways Pool Close Down?

With Airways aging and in serious need of repairs, the city decided to close it in 2017. At that time, officials said the pool needed $450,000 in renovations. That compares to the $30,000 needed for the city to keep a smaller community pool open for the summer.

Fresno Yosemite International Airport owns the Airways Pool, which is in councilmember Tyler Maxwell’s district. There are no plans to renovate or re-open the pool said airport spokesperson Vikki Calderon.

However, while the pool is owned by the airport, the city’s PARCS department would oversee its operations, providing staff and lifeguards. At this time, it’s unclear whether the city plans on re-opening Airways or building more community pools.

GV Wire reached out to the PARC’s department about the future of the Airways Pool but didn’t get a response.

Maxwell on the other hand said the pool had been commissioned for deconstruction before he joined the council, and due it’s proximity to the Fresno Air National Guard Base – the pool is unlikely to re-open.

“The 144th wing has been eyeing space where the pool was located, and the jet fighters are needing access to more space,” said Maxwell.

Major Heatwave Hits Fresno Amid a Shortage of Pools and Lifeguards

With Fresno mired in the triple digits this week, places to go for a swim and cool down are limited.

The city of Fresno is currently dealing with a shortage of lifeguards that will keep many local pools locked up or see their hours reduced.

The city has an agreement with Fresno Unified to use its seven high school pools as “blue spaces” for recreational swimming. However, only two Fresno Unified pools are offering swim lessons. 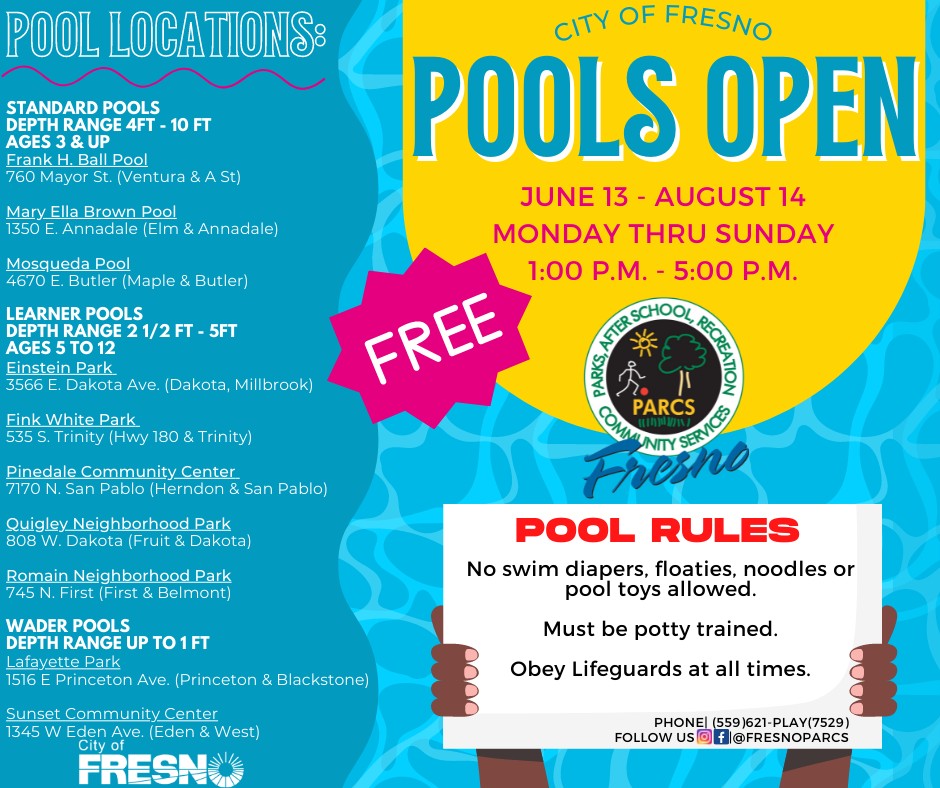 A list of recreational swim sites that will be open in the city of Fresno this summer. (Fresno PARCS)

In a previous city council meeting discussing the PARCS budget for fiscal year 2023, councilmember Esmeralda Soria advocated for the use of Measure P funds to bring more community pools to Fresno, especially in communities west of Highway 99.

According to PARCS Director Aaron Aguirre, the last time a community pool was built in the city of Fresno was in 1985; the last pool to be remodeled was Frank H. Ball in 2018.

“We do have some dollars to redo some of those existing pools,” said Aguirre. “I know that a lot of the newer designs do incorporate splash pads, which I know is not a pool, but those are some items that have been incorporated.”

Aguirre mentioned that the city had been working to establish a partnership with the Central Unified School District similar to the one with Fresno Unified.

“If the school district is not interested in working with us to provide access to the pools west of the 99, I think we are going to have to think of an alternative,” said Soria. “I know that we have the splash pad, but it is very different from getting swim lessons or having access to a community pool that is nearby.”