Video From School Hall Outside Uvalde Massacre to Be Shown 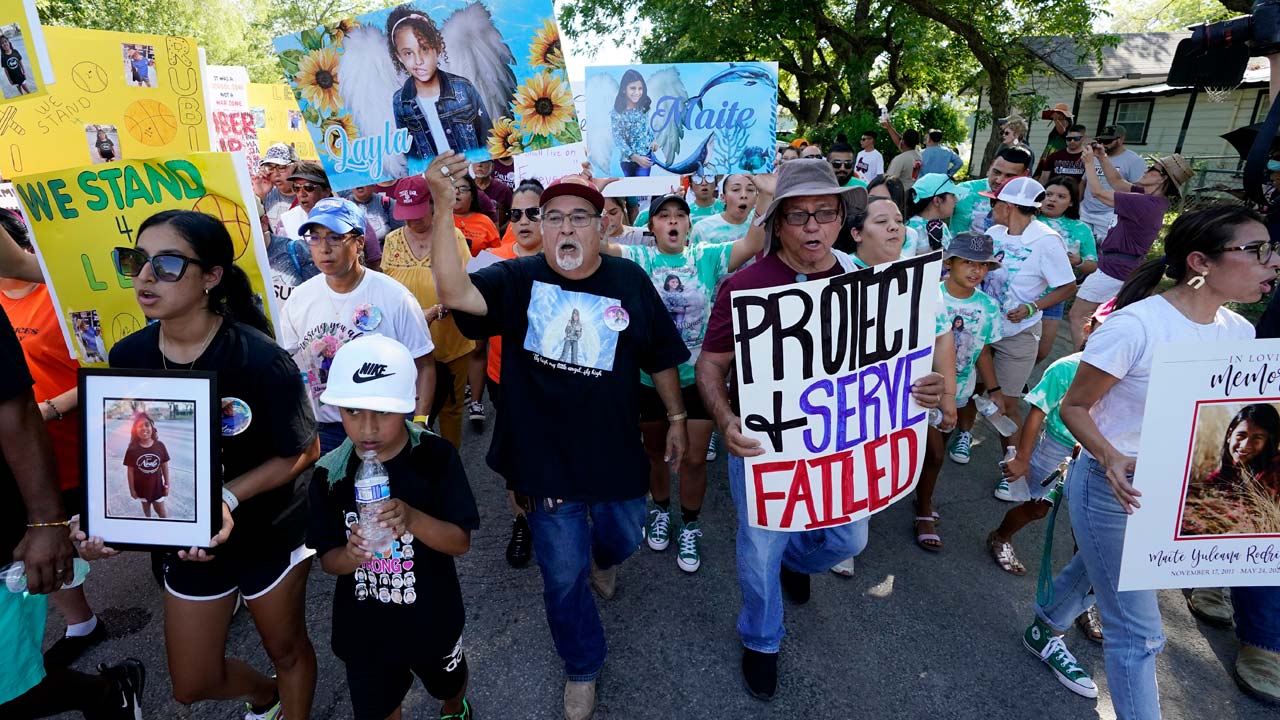 Family and friends of those killed and injured in the school shooting at Robb Elementary take part in a protest march and rally on Sunday. (AP Photo/Eric Gay)
Share with friends

Surveillance video from the Robb Elementary School hallway where police waited as a gunman opened fire in a fourth-grade classroom will be shown this weekend to residents of Uvalde, a Texas lawmaker leading an investigation into the massacre of 21 people said Tuesday.

The 77-minute video, which officials say ends before law enforcement finally breached classroom May 24, does not contain images of children. It has received renewed attention over the past week as anger mounts in Uvalde over an incomplete account about the slow police response and calls for accountability seven weeks after the worst school shooting in Texas history.

Rep. Dustin Burrows, a Republican leading an investigation into the shooting, tweeted that the video and findings from a preliminary report will be shown Sunday in Uvalde to residents and distributed publicly soon after.

“We feel strongly that members of the Uvalde community should have the opportunity to see the video and hear from us before they are made public,” Burrows tweeted.

Nineteen children and two teachers were killed. Police waited more than an hour after the shooting began before confronting the gunman, who was killed by police.

Burrows said his committee has interviewed more than 40 people behind closed doors over the last several weeks, including law enforcement who were at the scene. He has defended the committee talking with witnesses in private to elicit more candor about what happened.

State police said last week that Uvalde County District Attorney Christina Busbee had objected to releasing the video. Busbee has not publicly addressed those claims and did not immediately respond to a message seeking comment left with her office Tuesday.

State and local officials have previously cited the prosecutor’s ongoing investigation as a reason they could not release information about the shooting, including body camera footage.

State authorities have cast Arredondo as the on-scene commander and said his errors delayed police killing the gunman. Arredondo, however, has told the Texas Tribune he didn’t consider himself to be in charge of operations and that he assumed someone else had taken control of the law enforcement response. He did not have a police radio at the time.

The roles of the ranking on-scene officers from other agencies, including the Texas Department of Public Safety, remain unclear. Local officials in Uvalde have accused the state police of repeatedly putting out inaccurate information about the shooting while glossing over the role of its own troopers.