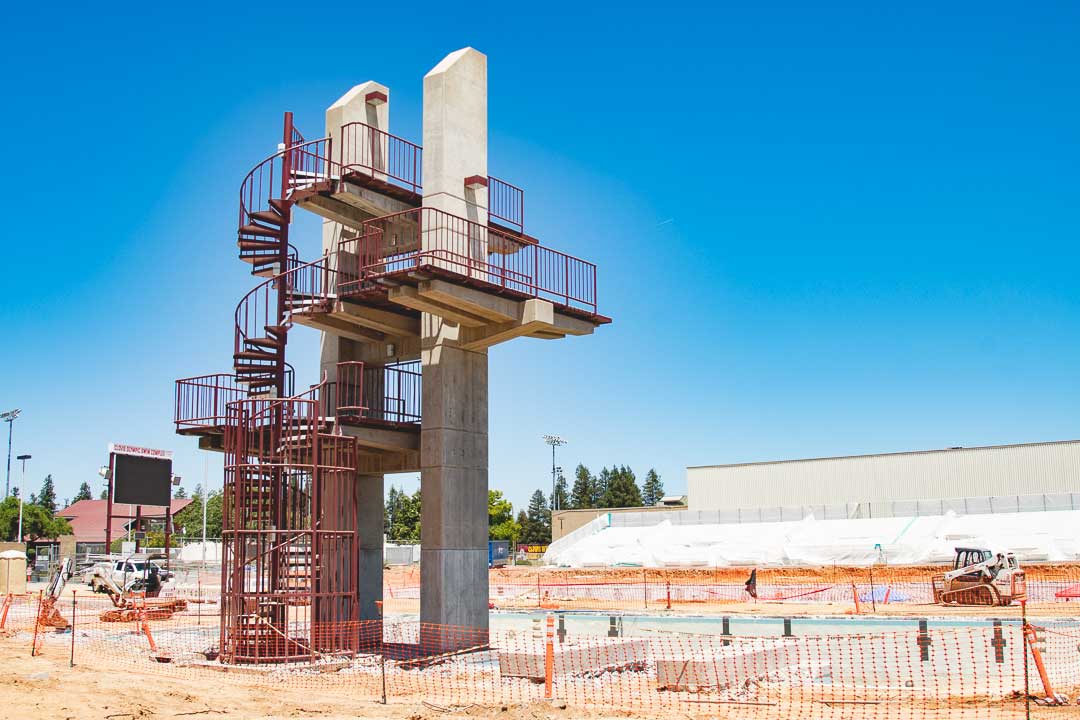 The Clovis West Aquatics Center is the site of a $7.5 million project this summer. (GV Wire/Albert Baker)
Share with friends

About the only thing left standing at this point is the dive tower where high schoolers have taken the plunge for years. Clovis West is the longtime host of the annual California Interscholastic Federation swimming and diving championships.

The underground pipes that provide water to the diving and swimming pools were leaking more often, forcing Clovis Unified to dig into the pool deck to find and repair leaks, said Denver Stairs, assistant superintendent of facility services.

“As we repaired one section of the pipe with new piping, it would leak again another 20 feet down the line,” he said. “And so we were constantly chasing it and at one time we were losing quite a bit of water every day out of there.”

Not good in normal times, and particularly not good during a drought.

The piping was original to the school, which was built in 1976, Stairs said.

The deck, which had been replaced since the school’s opening, had become pitted by chlorine water and also needed replacing, he said.

“There was these big concrete steps, a seating area that kind of surrounded the swimming pool area and the dive area. And they were pretty severely cracked and starting to chip off,” he said.

Meanwhile, the 50-meter pool was also in need of replastering, which has to be done on a regular basis to keep it in shape, Stairs said.

But first, the pool needs to be completely drained.

The project was timed to begin right after the last event. To limit the amount of time the facility would be closed to students, the district decided to combine all the repairs into one big project, Stairs said.

“The state swim meet ended on a Saturday, and on Monday morning we started the demo,” he said. “Our goal is always just to improve the facility for our community and our kids. And so it looks like a whole lot is going on right now in a very short amount of time. But we do that so that we can get it done and have the least amount of impact to our students during the school year.”

The project should be completed by December, according to the district’s schedule.

The Clovis West project is mostly to repair and replace existing plumbing, decking, and pool resurfacing, but there will be at least one welcome addition to the site, Stairs said.

“We have a large set of bleachers that are in the pool area, and we’re putting a shade structure over it,” he said. 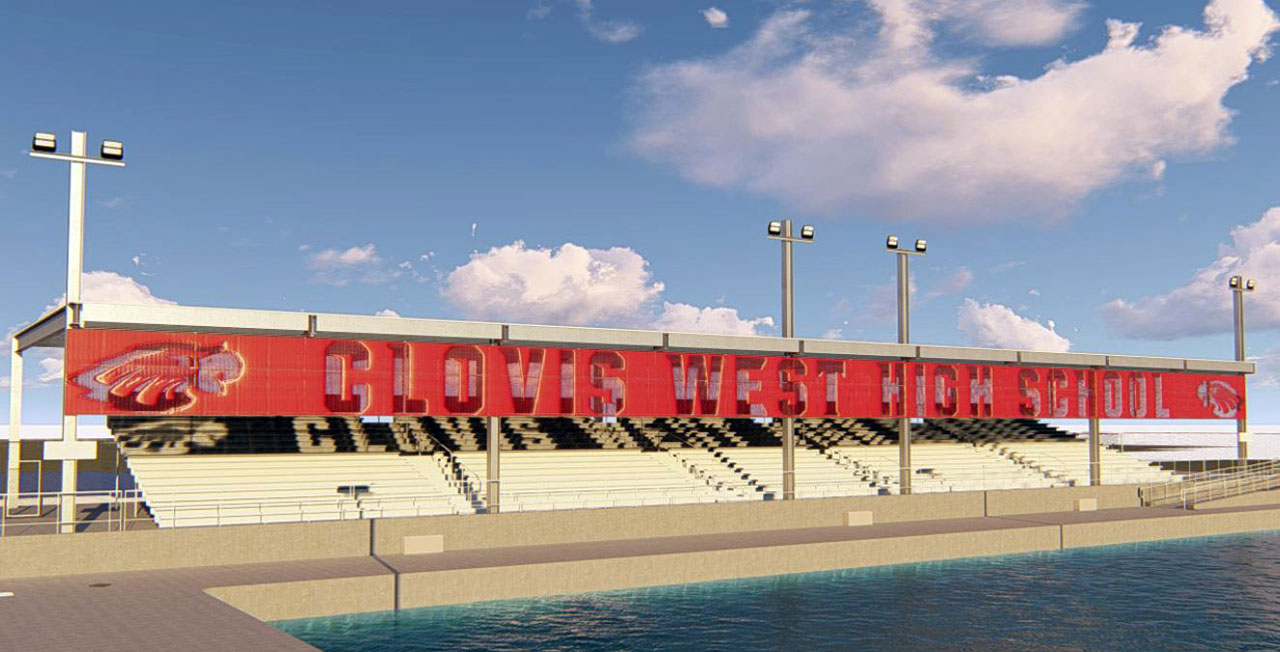 “In addition to the benefit to our local swim community, improvements to the swim complex could increase opportunities to draw tourism revenue into the area through hosting state, regional and national meets,” she said. 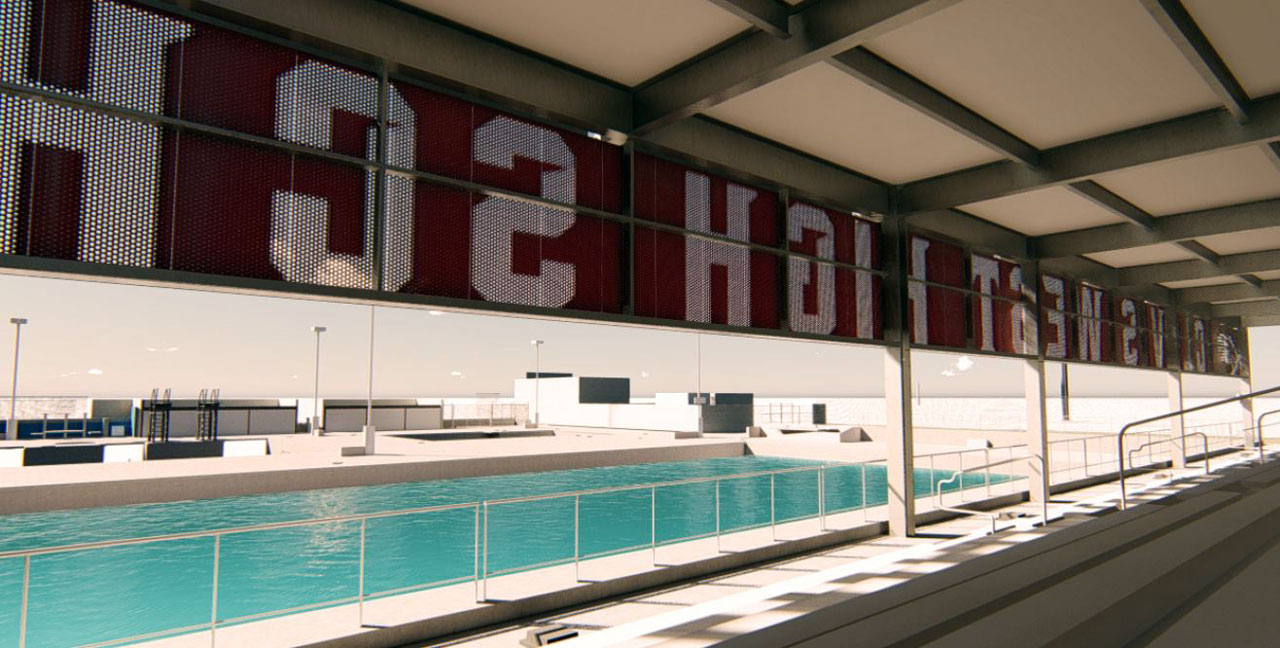 “It’s named as an Olympic swimming complex, so we’re proud of it,” Stairs said. “And we love having the swimming here and getting to watch all of our athletes perform.”