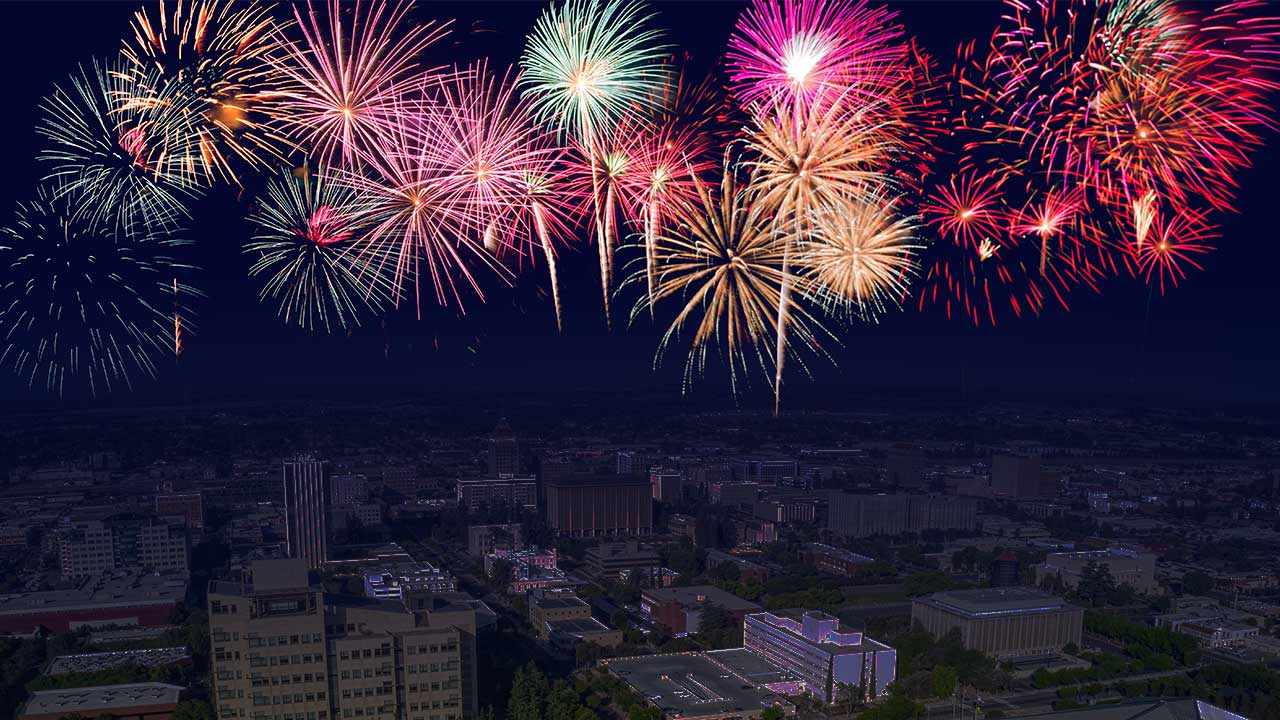 As the pandemic eases, 4th of July celebrations return with a bang across the Central Valley this weekend. (GV Wire Composite/ Paul Marshall)
Share with friends

The Valley’s torrid temperatures will start to cool off this week, just in time for Fourth of July celebrations.

Firework shows that in the last two years have been canceled due to the COVID-19 pandemic will be back with a bang this year — including Freedom Fest at Buchanan High School in Clovis.

Plenty of food trucks and vendors will also be on hand for those looking to enjoy a snack and a light show.

But be forewarned: Anyone lighting up illegal fireworks could be fined thousands of dollars.

Where and Where Will Fresno Firework Shows Take Place

The Fresno Grizzlies will host their big firework show after their game on Monday.

Tickets are $40 and include an all-you-can-eat meal of hamburgers, cheeseburgers, hot dogs, chili, corn on the cob, pasta salad, watermelon, cookies, and water. The splash pad will also be open for kids and every attendee gets a free hat.

Tioga Sequoia Brewing Company is partnering with Fresno Street Eats on a stadium fireworks watch party at the beer garden. A variety of local food trucks will be on hand, including Sno Biz, Dog Shack, and Tacos Las Salsas.

The theme for the program is” One Nation Under God.” Says Pastor Jim Franklin: “This will be an old-fashioned patriotic Fourth of July celebration returning us back to the Godly heritage our country was founded upon.”

Granite Park Fresno will host a baseball tournament on Saturday, July 2. After the tournament, free entry will be available to the public at 7 p.m. for the park’s annual Independence Day Celebration. Attendees are welcome to bring chairs and canopies, excluding outside food and drinks.

General admission is $5, and children under 3 get in for free. Gates open at 5 p.m. with plenty of food, entrainment, and activities for everyone.

Firework Shows Around the Valley

The show is a free family-friendly event. A boat parade will follow at 6 p.m. Organizers advise attendees to wear comfortable shoes and get to the lake early. Parking will most likely be hard to find.

Gates open at 6 p.m. Admission is $5 , and children under 5 are free. Organizers say credit cards will not be accepted as it is a cash-only event.

Food vendors will be there. The event begins at 6 p.m. The fireworks show will start shortly after 9 p.m.

The foam party will go from 6 – 10:30 p.m. offering an immersive foam party experience. The event will also have live music and a variety of DJs for people to dance to and while they watch a fireworks show. However, there is an age limit, only adults 18 and over can attend.

First Responders on the Prowl for Illegal Fireworks

Both the Fresno Fire Department and the Fresno Police Department warn Fresno residents that the fine for lighting or allowing illegal fireworks at your residence can be up to $5,000.