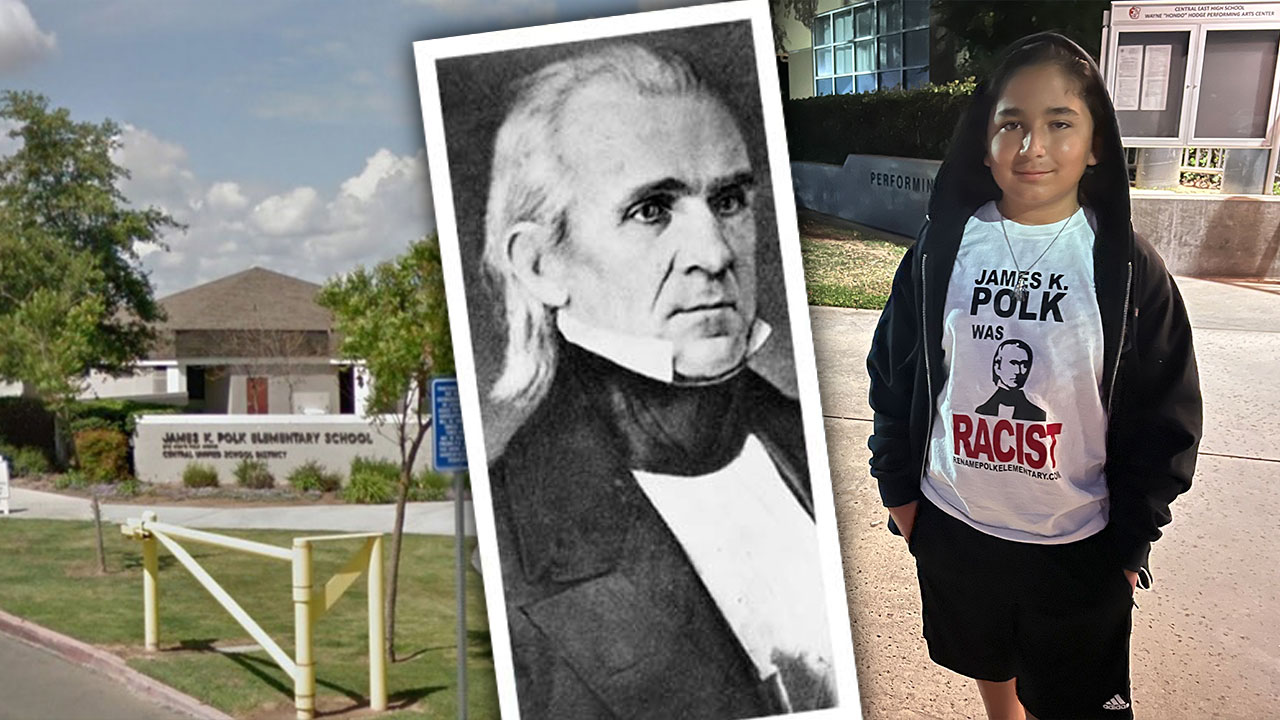 Malachi Suarez and his family cheered Tuesday night when the Central Unified School Board voted 5-2 to rename James K. Polk Elementary School because of Polk’s slave-owning and racist history.

It was Malachi’s GATE project more than two years ago that started him on a lobbying effort to change the school’s name, leading to lengthy discussions, the creation of a committee, community surveys and town hall meetings, and culminating in Tuesday’s vote.

But the board’s initial vote didn’t make the name change a done deal. There were a few moments of suspense when the two trustees who had voted against the name change, Jason Paul and Jeremy Mehling, made a bid to restore the Polk name to the school because it sits on Polk Avenue. That motion died by a 2-5 vote.

Afterward, GV Wire asked Malachi how he felt about his successful lobbying effort.

“I’m excited, but I’m also disgusted by how long it took,” he said. Malachi began his campaign to change the school’s name when he was 9 and a fourth-grader at the school; he’s now 11 and looking forward to entering the sixth grade in August.

Central Unified can’t say with any certainty why the school was originally named for the nation’s 11th president, who brought enslaved people to work at the White House and whose views on Manifest Destiny, the argument for westward expansion on the North American continent, are cited by many today as evidence of Polk’s espousal of white supremacy.

The district also doesn’t have historical records that specify how Madison Elementary School, which sits on Brawley Avenue at Madison Avenue, got its name. But since it’s not James Madison Elementary, the Board Committee to Study Names and Mascots did not recommend a name change. Madison, the nation’s fourth president, also brought enslaved people to work at the White House.

Madison School did not emerge unscathed, however. The board voted 4-2, with Paul and Mehling voting against and Trustee Phillip Cervantes abstaining, to change Madison’s mascot logo image of a Native American but to retain the name Warriors.

Like the name change for Polk, the mascot change had been recommended by the name and mascot study committee, which also recommended establishing criteria for future school names (passed 6-1 with Mehling opposing) and putting a 15-year moratorium on considering name changes for existing schools (passed 4-3, with Trustees Cervantes, Yesenia Carrillo, and Naindeep Singh Chann opposing).

One committee recommendation that failed was to rename Houghton-Kearney Elementary because Theo Kearney’s agricultural business decisions were seen as harmful to some ethnic groups. The board voted 7-0 not to rename the school.

The study committee had made no recommendations about a new name for the Polk Avenue school or Madison’s mascot logo. Although neither was on the agenda, Board President Richard Solis made motions to name the school Central, since the district’s centennial is approaching, and change Madison’s mascot to the letter M with two eagle feathers.

Both died for a lack of a second, but the name change motion gave Paul and Mehling the opening to suggest naming the school after Polk Avenue.

Carrillo said she wanted to give Madison students the opportunity to select their new mascot logo instead of having the decision come from the board. But what if the students vote to reclaim the former mascot image of a Native American, Solis asked.

Superintendent Ketti Davis said the school can inform students that the board had voted to delete the old image and that they could pick a new one, so long as it wasn’t the old one.

Solis noted that he was trying to speed along the naming process, since the new name would be in effect at the start of the school year in August. Davis said that the district already has a list of names that had been prepared for past school namings and that the board could consider the list as an action item at its next meeting.

Malachi Suarez says he already knows a good name — Maria Moreno, a Texas native who was the first woman farm laborer to be hired as a labor organizer. And the mascot? He wants to change the Pioneers to the Axolotls, after the Mexican salamander.