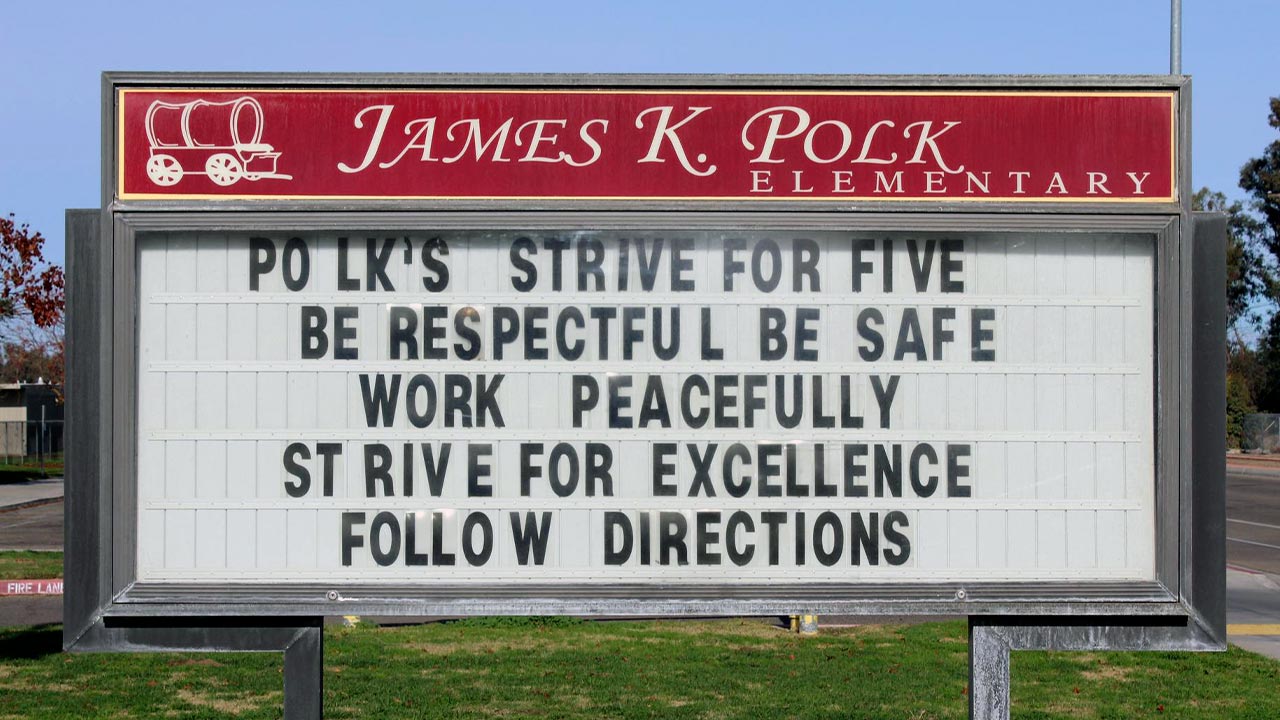 Polk Elementary School is one of two schools that might be renamed in Central Unified School District. (Central Unified)
Share with friends

The furor in Central Unified is a microcosm of the culture wars that have gripped the nation in recent years, pitting progressives who say that America’s history of racism, westward expansion, and discrimination should be excoriated, not celebrated, against conservatives who rail against renaming places and facilities and removing statues, saying that such actions erase history.

The School Board will take up the issue at Tuesday’s board meeting, culminating a long and drawn-out process that was sparked two years ago by a school project by Polk Elementary student Malachi Suarez.

Board President Richard Solis, who served on the district’s Committee to Study Names and Mascots that the School Board created a year ago, instigated the committee’s recommendation that the names of Polk Elementary and Houghton-Kearney K-8 be changed, and that the Madison Elementary mascot logo of a Native American be changed but the mascot name Warriors be retained.

He noted at the committee’s final meeting on June 2 that the board’s decision might not completely please name change proponents and opponents, but each side can claim at least a partial victory.

“In the reality of life, you’re not going to win everything 100%, especially when you’re dealing with the views of a lot of people,” he said. “All we can do is try to find a middle ground that everybody can stand on and have balance, and I hope that’s what this committee has done.”

The furor in Central Unified is a microcosm of the culture wars that have gripped the nation in recent years, pitting progressives who say that America’s history of racism, westward expansion, and discrimination should be excoriated, not celebrated, against conservatives who rail against renaming places and facilities and removing statues, saying that such actions erase history.

The committee’s recommendation follows the criteria established for selecting school names, including avoiding people and mascots involved in the colonization of people, slave owners or participants in enslavement, perpetrators of genocide or slavery, and those who directly oppressed or abused women, children, queer, or transgender people.

Under the criteria, school names would honor people who have made significant contributions, including to social justice, or to acknowledge the region’s topography.

The district followed that criteria with some school names: Rio Vista, Glacier Point, El Capitan, and River Bluff. Others are named for notable California authors, Fresno native William Saroyan and John Steinbeck. Its newest schools, Tilley Elementary and Garza High, were named for a beloved teacher and football coach, Hahn Phan Tilley and Justin Garza, who lost battles with cancer.

If the School Board votes in favor of the committee’s recommendations, Central would be following somewhat in the path of other school districts that have renamed schools. The recommendation to keep the mascot name Warriors is similar to the controversial decision reached last year by the Fresno Unified School Board to scrap Fresno High’s logo of a Native American but keep the name Warriors.

Likewise, the Fresno board voted to remove from a northwest Fresno elementary school the name of Fresno developer J.C. Forkner, known for his racist views, and replace it with H. Roger Tatarian, a Fresno native and veteran newsman. Tatarian Elementary is Fresno Unified’s first school named for an Armenian American and came after a hard-fought campaign by the city’s Armenian community.

In an attempt to stem any further debate on the hot topic, Solis also proposed, and the committee approved, putting a 15-year-moratorium on name changes. 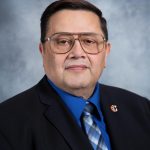 “In the reality of life, you’re not going to win everything 100%, especially when you’re dealing with the views of a lot of people. All we can do is try to find a middle ground that everybody can stand on and have balance, and I hope that’s what this committee has done.” — Richard Solis, Central Unified board president

So why the recommendation to change Polk Elementary but not Madison Elementary?

Meanwhile, Houghton-Kearney is being recommended for renaming because its half-namesake, Theo Kearney, has come under criticism for his agricultural business decisions that were seen as harmful to some ethnic groups. The school resulted from the merger of the Houghton and Kearney elementary schools. J.F. Houghton donated the land for the original site, according to the district.

Throughout the past year, the district’s committee conducted surveys that showed strong support for keeping the school names, raising questions of whether the surveys had been “astroturfed” by people outside the district who opposed name changing.

Town hall meetings also were the subject of concerns, with Central Unified students later reporting that they felt unsafe when they tried to provide input because of the reaction of other audience members.

Committee meetings were marked with sharp challenges by Malachi’s father, Gabriel Suarez, who was cited by the committee chairwoman for failing to follow the committee’s “norms” and booted out of the committee’s virtual meetings after repeated warnings. Suarez had objected to the appointment on the committee of parent Gina Sellers, who was accused of tearing down Malachi’s poster on Polk at the school, and her husband Joshua.

According to the minutes of an early meeting of the committee, Gina Sellers said that she had been unaware that the poster was Malachi’s GATE project and her intention was not malicious.

Solis clearly was walking a narrow tightrope at the June 2 committee meeting when he proposed recommending changing two school names and one mascot logo.

“To tell you the truth, I can see both sides of this,” he said. “And, I’m going to be taking a position, I’m for the kids, and I’m for the community. And because of that, I was looking for a win-win situation.”

It remains to be seen, however, whether the School Board’s vote at Tuesday’s meeting is seen by residents as win-win or lose-lose.

The public session of Central Unified’s School Board meeting will begin at 7 o’clock tonight and will be held at Central East High School, 3535 N. Cornelia Ave., Fresno.

Related Topics:Central Unified School Board
Up Next