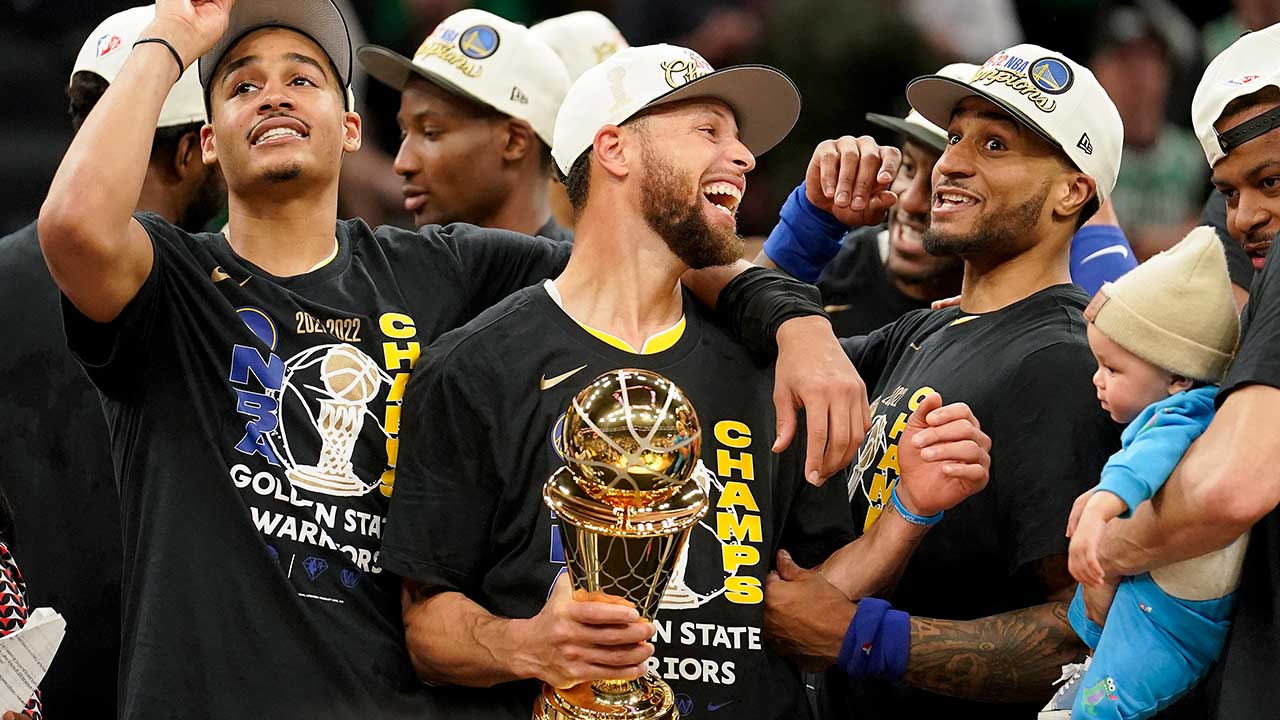 Stephen Curry, center, celebrates with teammates as he holds the Bill Russell Trophy for MVP on Thursday, June 16, 2022, in Boston. (AP/Steven Senne)
Share with friends

Greatest shooter ever. That’s what everyone has been calling Golden State’s Stephen Curry for years now, for obvious reasons. Nobody in the history of basketball has made more 3-pointers or made the art of throwing a ball through a hoop look easier than Curry does. 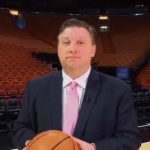 He has earned that distinction.

And it still seems like he has been undersold.

Thing is, Wardell Stephen Curry II is not just the greatest shooter ever. It’s time to finally call him what he is — one of the greatest players ever. Go ahead, put him in the Greatest Of All Time conversation. It’s a debate that will never end anyway, and he has earned the right to be there for one simple reason.

He has changed the game. The 3-pointer is vital now, and Curry made it that way.

“I think he’s pretty much established what he can do,” Warriors guard Klay Thompson said after the NBA Finals ended Thursday night with Golden State as champions and Curry as Finals MVP. “But to see him earn that, he’s one of the greatest ever and we all followed in his lead and gosh, that was awesome. What a series.”

Yes, what a series Curry had.

And what a player, too.

Curry’s spot in the Basketball Hall of Fame was locked up long before Thursday night, when he scored 34 points and the Warriors won their fourth title in eight years by topping the Boston Celtics 103-90. What this one meant, though, was clear. Curry was weeping tears of joy before the game ended, unable to hold back the emotions anymore.

“I’m happy for everybody, but I’m thrilled for Steph,” Warriors coach Steve Kerr said as the champagne was spraying about in the champions’ locker room in Boston after Golden State’s title-clinching win. “To me, this is his crowning achievement in what’s already been an incredible career.”

This was his crowning moment. For now, anyway.

There’s no reason to believe there can’t be a fifth ring for this Warriors era, either, as long as a healthy Curry is leading the way.

Add that to the list, too. And his legend on the court only continues to grow. The 34-year-old Curry is stronger than ever, tougher than ever, and, somehow, more motivated than ever. He already had three rings entering this year, has the 3-point record, more money than he could spend in 10 lifetimes and there isn’t a corner of the world where he isn’t known or revered. His wife Ayesha is a world-class cook. He has made birdies at Augusta National.

Related Story: Wiggins Delivers at Both Ends to Put Warriors One Win From NBA Title

Take a Look at Curry’s Resume

Curry, by all measures, had nothing left to prove.

Apparently, he disagreed. When last season ended with a loss in the play-in tournament, Curry went right back to work, with this title in mind, knowing that few so-called experts thought the Warriors had a chance of extending their dynasty. They had three titles and five finals trips in five years from 2015 through 2019, then injuries and roster changes sent them to the bottom of the NBA in 2020 and on the outside of the playoff picture last year.

“Damn, we did it. It’s crazy to think about,” Curry said. “All that talk paid off. Manifest your destiny in a certain way, and that stubbornness — who we are matters more than what anybody is saying about us — is why we’re here.”

His resume is ridiculous: Curry is an eight-time All-Star, a two-time NBA MVP, one of them unanimously, a two-time scoring champion, All-Star Game MVP, now is a four-time champion — and, finally, an NBA Finals MVP, also by unanimous decree.

Not bad for a player who went No. 7 in his draft class, got kicked out of his first college practice at Davidson for showing up late, was plagued by concerns about plenty of things in his early NBA years — he was too small, his ankles were too bad — and needed five seasons just to make his first All-Star Game.

“I thank God every day that I get to play this game at the highest level with some amazing people,” Curry said on the floor as the celebration was starting, tears running down his face, game ball cradled under one of his arms. “This is what it’s all about.” 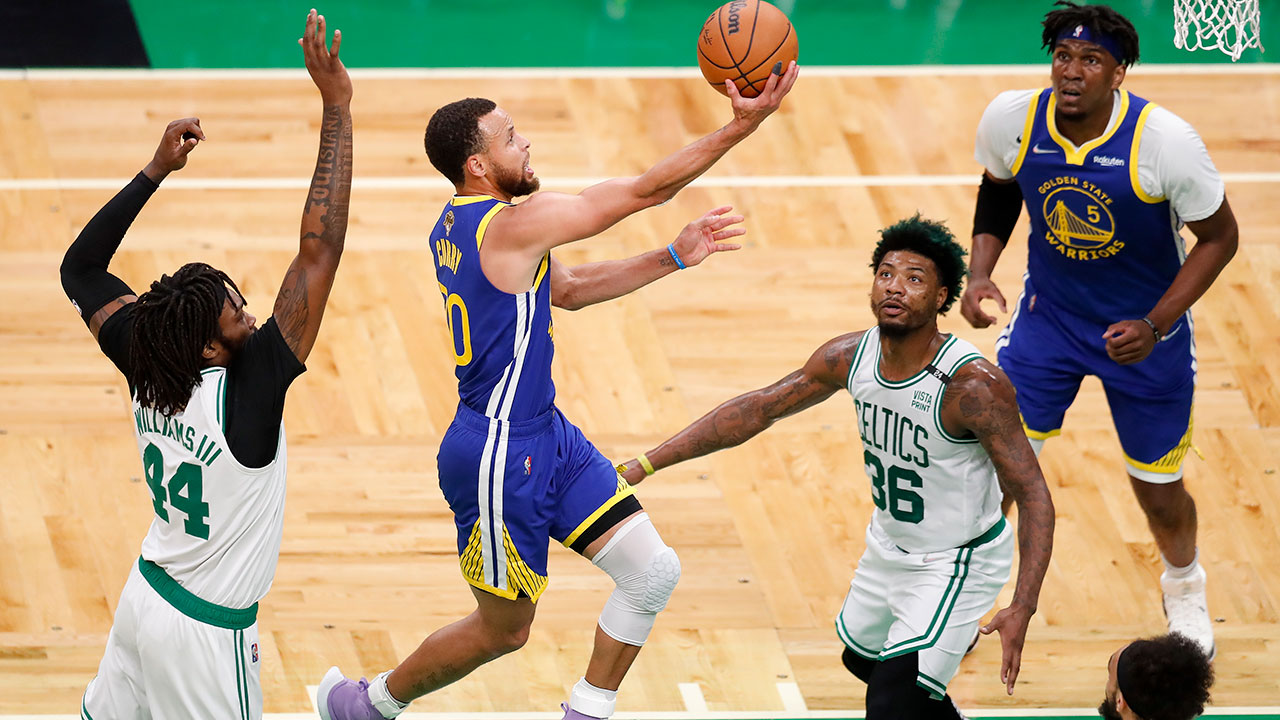 Yes, Curry Has ‘Fit in Quite Nicely’

On the night Curry was drafted in 2009, after six players who have a combined zero NBA championships heard their names called before him, the Warriors made no effort to hide their excitement.

That said, it wasn’t exactly effusive praise, either.

“He’s a guy who’s going to fit in quite nicely,” said Larry Riley, then the general manager of the Warriors.

Probably safe to say Riley was right. Understated, sure, but right.

Now, he has more.

The fourth parade is Monday. The fourth ring comes this fall. The respect should be there forever now. He’s not just a great shooter anymore. It’s official: Stephen Curry is a player for all time.

“For Steph to win a finals MVP, and I know he said it don’t matter … but to add that to your resume as a competitor, you want that,” Warriors forward Draymond Green said. “For him, well deserved. It’s been a long time in the making. But he left no doubt. Left no doubt. He carried us. And we’re here as champions.”

Tim Reynolds is a national basketball writer for The Associated Press. Write to him at treynolds(at)ap.org