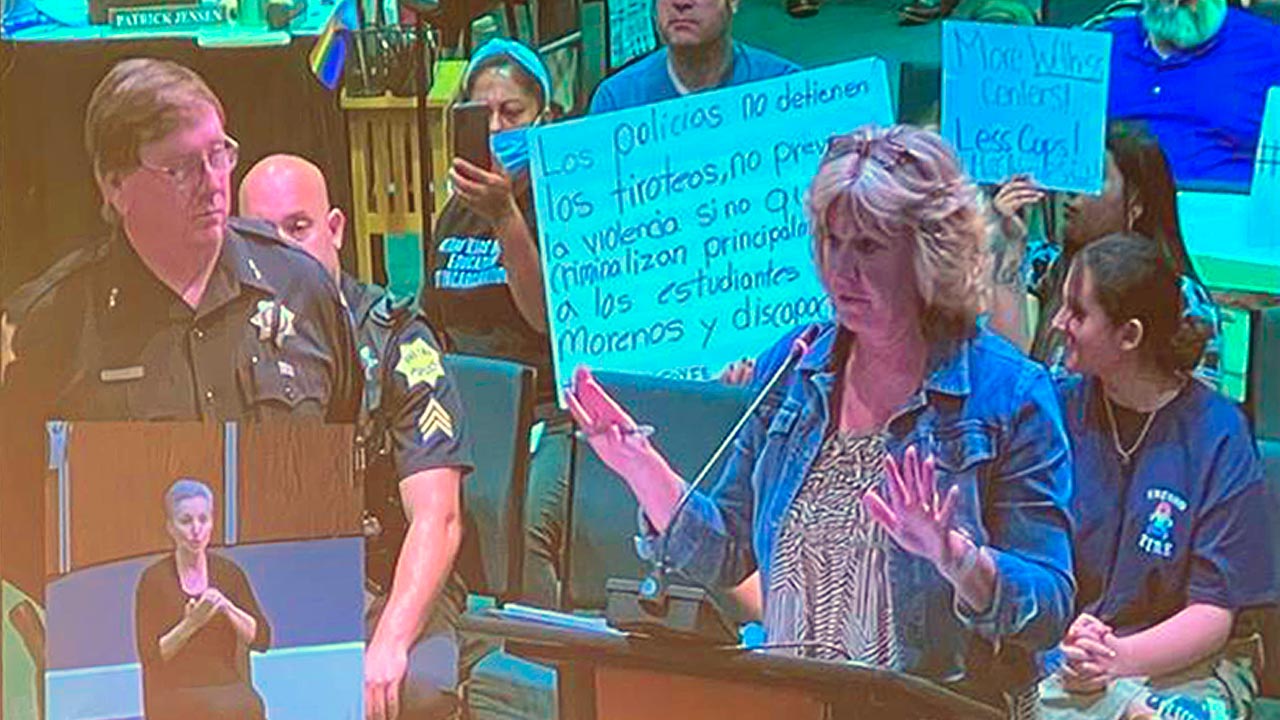 Twenty months after allowing a middle school police officer contract with Fresno Police Department to lapse, the Fresno Unified School Board voted 6-1 to bring cops back to the campuses.

Amy Idsvoog, the district’s executive officer for health services, safety and emergency response, said the first officers will go to Fort Miller, Tenaya, Terronez, Kings Canyon, and Gaston middle schools. Five more officers will go to Ahwahnee, Tioga, Scandinavian, Tehipite, and Sequoia after winter break, and to the remaining middle schools at the start of the 2023-24 school year, Idsvoog said.

Wawona Middle School is in a county island and is served by a sheriff’s school resource officer, she said.

The contract also provides for one supervising sergeant, who will start in August, she said.

The schools were selected based on multiple data points, including calls for service from Fresno police, emergency calls to the district’s support team, and Gaggle data “regarding possible student situations,” Idsvoog said.

Gaggle is an online tool that monitors student emails, Microsoft Teams chats, and the district’s OneDrive in search of key phrases, including possible self-harm, bullying and harassment, and inappropriate sexual content.

The officers are being phased in as Fresno Police Department staffing increases. The police department also is providing two school resource officers for Central Unified middle schools for the first time, with plans to add a third officer in the future as staffing is available.

In the wake of George Floyd’s murder by Minneapolis police in May 2020 that sparked public protests nationwide, there was growing community pressure to remove police officers from Fresno school campuses. The board decided, in part because schools were still closed due to the pandemic, not to renew the middle school contract.

In 2021 the board renewed the contract to have resource officers on high school campuses. 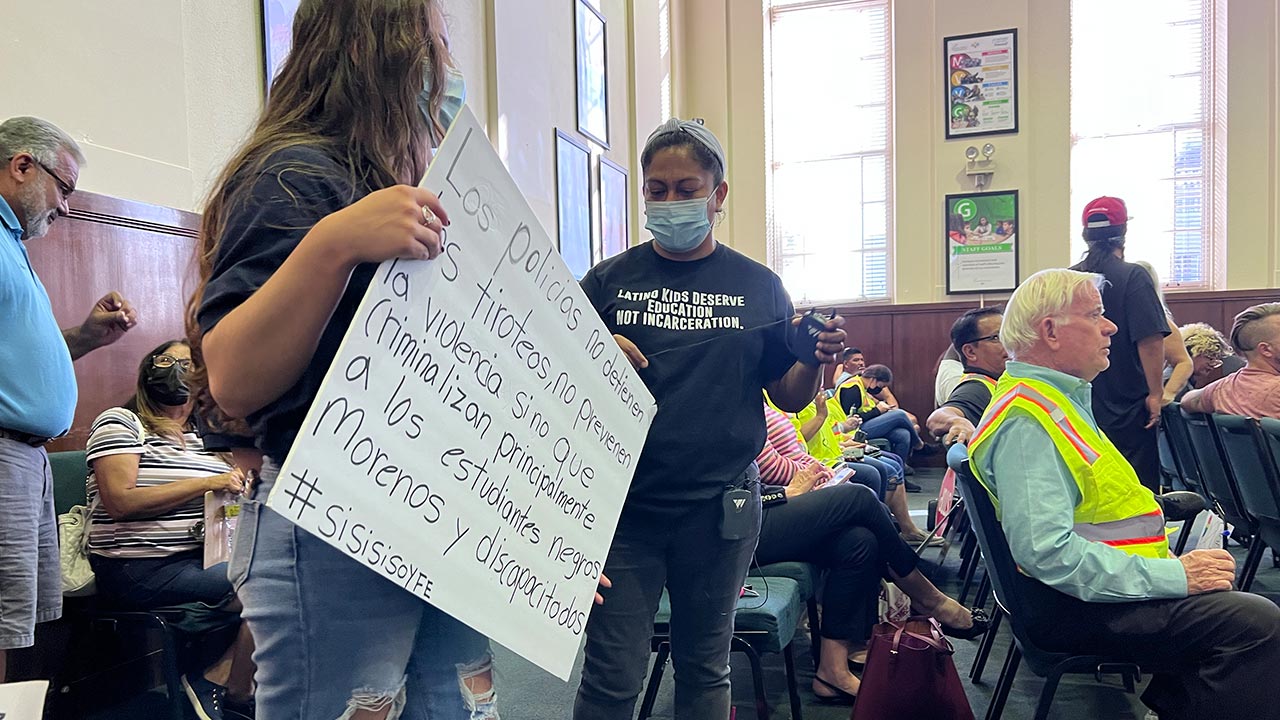 Some of the same people and organizations who had protested police on campus, such as Barrios Unidos, were at Wednesday’s meeting to lobby for the board to stick to its October 2020 decision. Speakers urged the board to invest in psychologists, counselors, and other support services instead of in law enforcement.

Likewise, several people who in recent months have called for more security on campuses spoke Wednesday in favor of renewing the contract to make schools safer.

Idsvoog noted that students reported in surveys that they felt more vulnerable when police officers were not on campus.

Board Clerk Veva Islas, who was in Washington, D.C. and was attending the board meeting by telephone, said she remained concerned over the officers’ training and over whether school officials would take every possible step to give students the services and supports needed to prevent the need for intervention by police officers. Islas cast the lone no vote against returning police to middle school campuses.

Idsvoog said that officers will participate in both cultural proficiency and restorative practices training.

Under the district’s rules of engagement, the school resource officers are not responsible for discipline or for minor incidents, including a mutual fight between two students, but would take action in major crimes, including fights with injury, she noted.

In reviewing the amended contract, Islas questioned why the district would have to pay for the lease of squad cars as well as the salary and benefits of the officers.

Deputy Chief Mike Reid responded that the officers would need a secure site on campus to store any equipment that might be needed to deal with safety, security, and medical incidents.

“What we found out by dissecting what happened in Uvalde, there’s some issues of entry,” Reid said, referring to the recent school shooting at a Texas elementary school where a teen shot and killed 19 children and two adults. “The police chief of the Uvalde Police Department was asking janitors for key rings. They didn’t have any breaching tools. There’s two officers that were shot trying to breach the door. So we need to have protection gear so that we can effectively take an enforcement action.

“The issue becomes, is it going to be readily available to that SRO at the site. They’re the ones that are going to be using those materials, so we want to make sure to get it into their hands.”

Reid said that in a crisis situation, the officers also would have access through their computers to live camera feeds that the district established years ago when Michael Hanson was superintendent.

“We sat down and did site maps of every school site. We also plotted where every camera was, and then we came up with an MOU (memorandum of understanding) that’s still in effect, that in an emergency instance, like an active shooter, we could take into our Real Time Crime Center that video” and provide it to responding officers, Reid said. “That’s something that’s unique in California. Not many school districts have it. And you guys had the foresight to do that about a decade ago.” 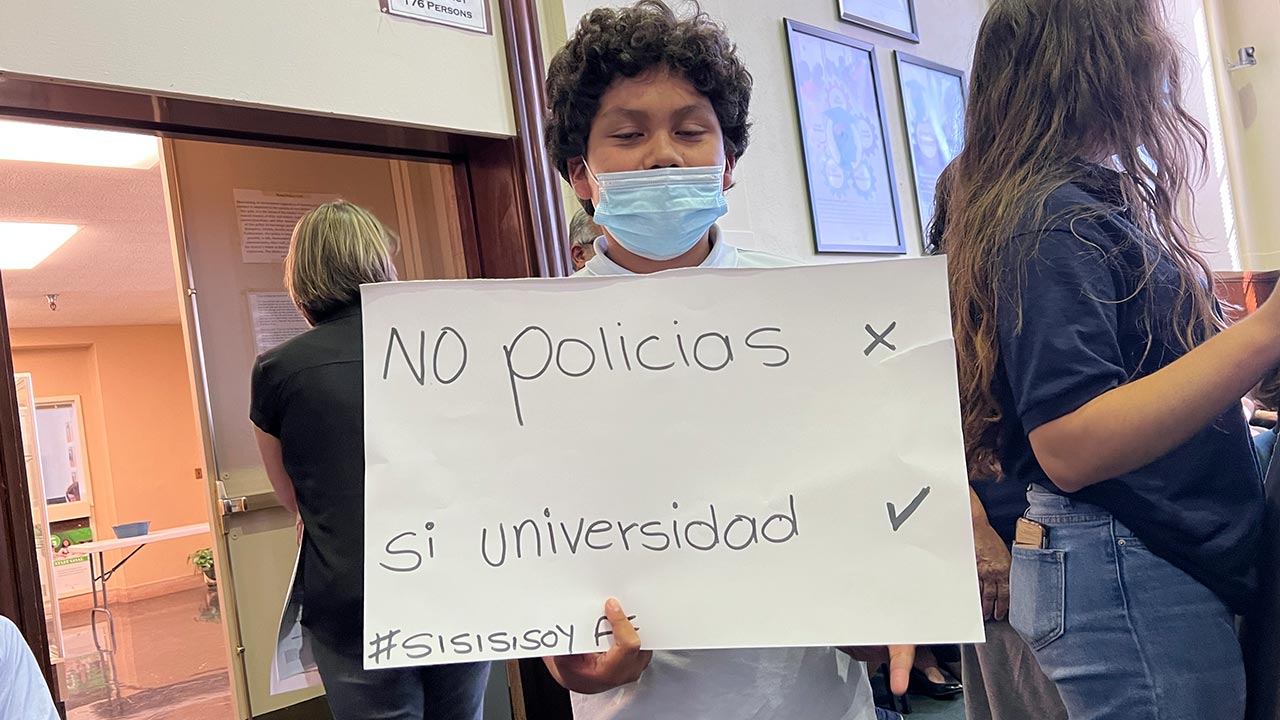 “No to police, yes to university” one sign reads in Spanish. (GV Wire/Nancy Price)