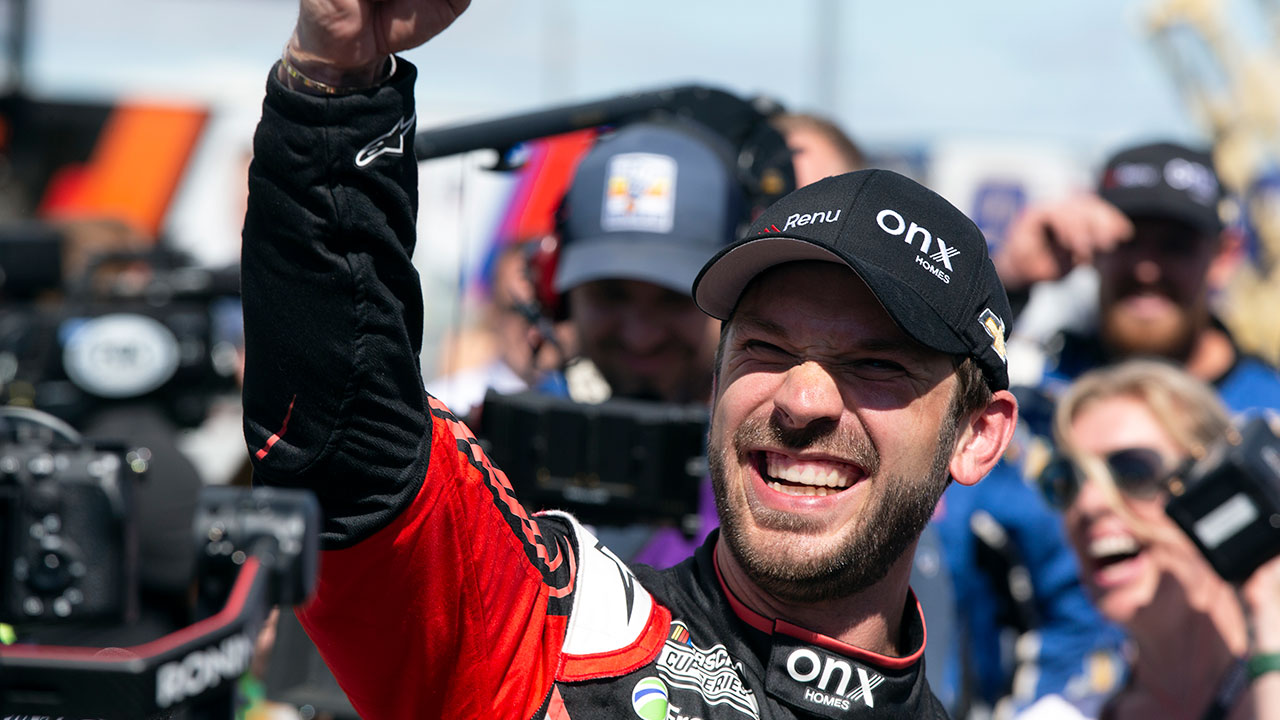 SONOMA — Daniel Suárez had tears in his eyes for so many reasons Sunday after he realized a lifelong dream by crossing the finish line first at Sonoma Raceway.

“I’m fortunate to be that driver that the whole Hispanic community can connect with.” — Daniel Suárez

While Suárez was overjoyed to become the first Mexican-born driver to win a NASCAR Cup Series race, he quickly felt overwhelmed with gratitude and memories of his motorsports journey.

He also thought about the multitude of fans backing him across the continent and beyond, including several hundred red-shirted supporters screaming their hearts out in the Sonoma grandstands as part of his Daniel’s Amigos outreach program.

“I just feel extremely lucky,” Suárez said after holding off Chris Buescher to the checkered flag.

“I’m fortunate to be that driver that the whole Hispanic community can connect with,” he added. “I feel like I have an entire country and community behind me. The people wearing red shirts today, those are my people. Some of them, they have exactly the same journey I have — coming from Mexico, not knowing the language, trying to find an opportunity, having goals, and trying to make that dream happen. These are my people, and I feel lucky to be the person to represent all of them.”

Celebrates By Punching a Pinata

Despite those poignant thoughts, this occasion was not solemn for the 30-year-old native of Monterrey who finally won in the 195th career start of a Cup Series career that began in 2017.

After his tears dried in the car, he quickly called for the pinata shaped like a taco that he’s been keeping on hand for his first win — and he celebrated by punching a hole through it with his fist.

“Nobody knows how much sweat, sacrifice, and tears this has caused me,” Suárez said. “This whole time, I was always dreaming about winning in the Cup Series.”

Suárez drove his Trackhouse Racing Chevrolet to the third Cup Series victory of the season for this rising 2-year-old team co-owned by former driver Justin Marks and music star Pitbull.

Suárez got past Buescher and took charge early in the final stage on this hilly road course in Northern California wine country, and he persevered through a pit stop and a caution to emerge in front with 23 laps to go. Buescher pushed him aggressively, but Suárez made no significant mistakes while rolling to victory.

Buescher’s second-place finish was also a season-best in his RFK Racing Ford. He fell just short of his second career victory.

“Hurts to be that close, but congratulations to Suárez,” Buescher said. “We were trying, trying to get him. Ran out of steam there.”

Suárez is the fifth foreign-born driver to win a Cup Series race, and he’s the first to win in all three of NASCAR’s national series. He won the Xfinity Series championship in 2016, and he also won a Truck Series race that year.

“I have never met a more determined, focused, hard-working racer in 20 years in this sport,” Marks said. “It’s amazing how consistent he is, how that fire continues to burn.”

The success of Suárez and Trackhouse Racing could be a welcome boost to a sport eager to expand its cultural footprint. After moving to the U.S. 11 years ago with a desire to race on bigger stages, Suárez is a major success story for NASCAR’s Drive for Diversity program, which aims to bring new perspectives and backgrounds to a largely monocultural organization for much of its history.

Michael McDowell finished a season-best third in front of Kevin Harvick in cloudy conditions in Sonoma Raceway’s first Cup Series race at full capacity since before the coronavirus pandemic. Austin Cindric was fifth in the final race before the Cup Series’ one-week midseason break.