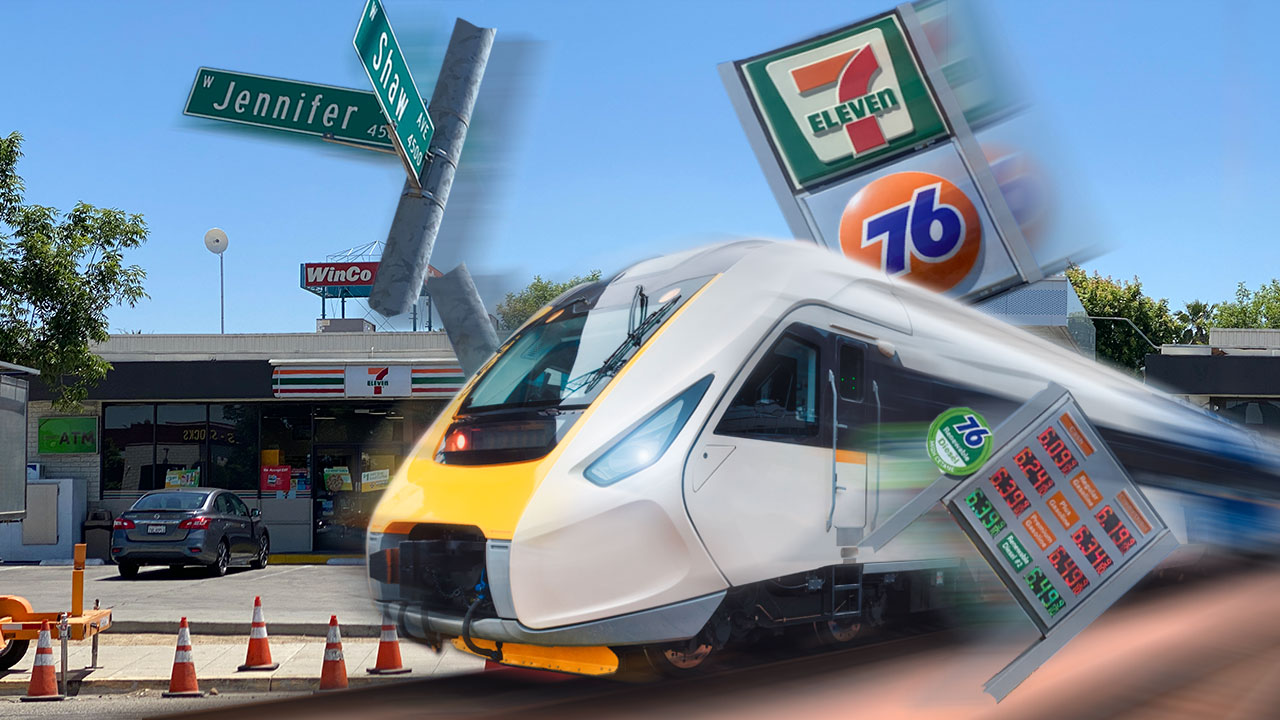 The High-Speed Rail Authority is seeking to take part of this 7-Eleven in northwest Fresno by eminent domain. (GV Wire Rendering / Paul Marshall)
Share with friends

The High-Speed Rail Authority wants more than just a Slurpee at a northwest Fresno 7-Eleven. It wants a piece of the property.

In Fresno County Superior Court on May 19, HSRA filed an eminent domain complaint declaring that the “certain real property or an interest therein is necessary for high-speed train system purposes.”

A map of the proposed eminent domain shows HSRA seeking a portion — about one-sixth of the 0.6 acre property — of the 7-Eleven at 4510 W. Shaw Ave., in the same shopping center as Costco. The property would be used for a maximum of 36 months during construction.

An HSRA spokesman anticipates that 7-Eleven would be able to continue operating its store — which includes a gas station — during construction.

The legal action is just one of at least six eminent domain lawsuits filed this year in Fresno County by the state to acquire land for the High-Speed Rail project.

The authority says it has filed around 500 eminent domain lawsuits overall.

“The Authority has acquired more than 2,000 properties, mostly without reaching this part of the process. The properties we already have in hand account for more than 90% of the total of properties we need for the first 119 miles currently underway,” HSRA spokesman Kyle Simerly said.

The first link in the project runs through the San Joaquin Valley. As envisioned, the system would eventually encompass more than 800 miles of rail, with up to 24 stations, the authority says.

HSRA plans to re-align Shaw Avenue so it will cross over two sets of train tracks — one for the high-speed rail and for for freight trains.

The construction would alleviate the train crossing at Shaw Avenue that has long been a traffic nightmare.

“This overpass has a multitude of benefits for the community. By separating what is an at grade crossing, we anticipate myriad safety, air quality, and mobility benefits for those using Shaw. There will no longer be the opportunity for trains and car, bike, and pedestrian traffic to interact and there will be less idling time for car traffic,” Simerly said. 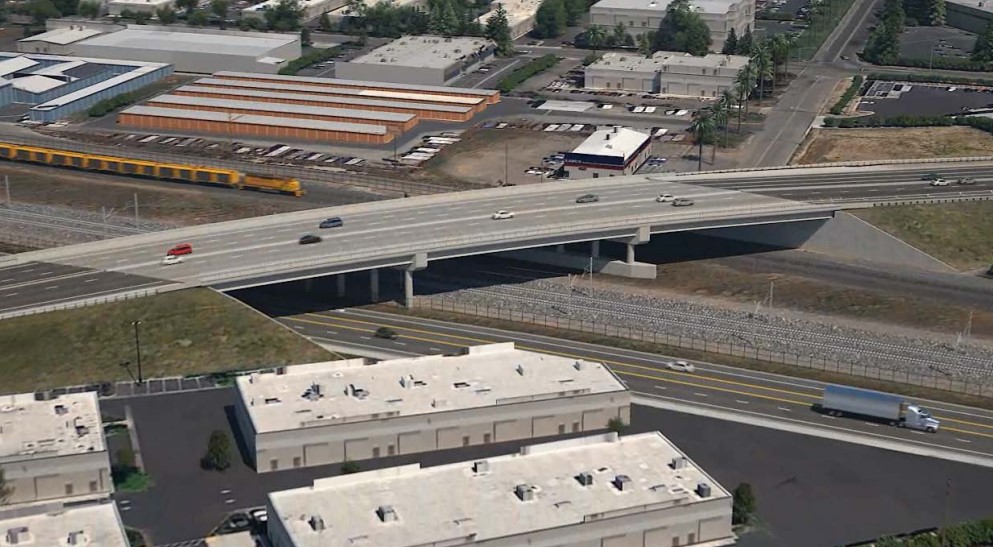 A rendering of the High-Speed Rail construction at Shaw Avenue, crossing over Golden State Boulevard and the train tracks. (Image: HSRA)

Henry R. Perea, a board member of the High-Speed Rail Authority, says litigation generally is part of the process.

“We always hope up front, that people can settle their  issues or cases with the authority. But in the case that we can’t, then this is just the next step in the process to get to a point where we can reach a settlement on the property,” Perea said.

Perea said reasons cases go to litigation include negotiating a price. He also said there may be a tax advantage to property owners if an eminent domain case is taken to court.

Information on how much HSRA offered for the 7-Eleven property has not been made pubic.

[Update, 6/02/2022, 5 p.m.: this story has been updated to clarify the nature of the overcrossing between Shaw Avenue and the railroad tracks.]

Across the street on Shaw Avenue, the HSRA has also filed an eminent domain notice for land owned by the parent company of Lifestyle Solar. Adam Hong, who works in business development for the company, says it would be for land next to its warehouse.’

“Due to the uncertainty, it stopped us from developing the land completely since we bought it in 2015,” Hong said. “We’ll be losing a lot of prime real estate.”

Lifestyle Solar has until next Monday to respond to HSRA’s request for the land. The case has not gone to court yet, but it could head to arbitration or mediation first.

Hong says Lifestyle Solar will be “negotiating a better price as best as we can.” 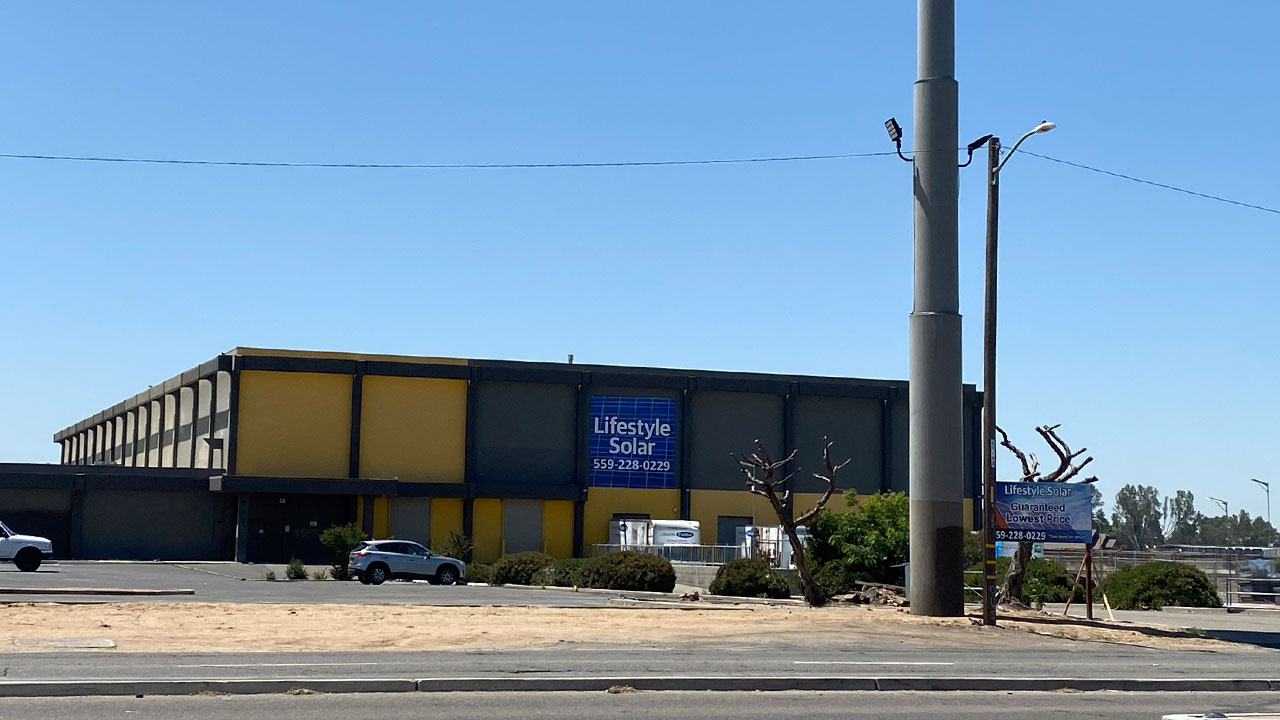 High-Speed Rail is considering taking land to the right of the Lifestyle Solar warehouse by eminent domain. (GV Wire/David Taub)

The decision to pursue eminent domain came from a March 11, 2022 meeting of the State Public Works Board. The state agency considered nine properties for eminent domain at that meeting. Only 7-Eleven sent a letter of objection.

The board oversees “fiscal matters associated with construction of projects for state agencies,” the state website says. Members consist of various units of state government. It frequently discusses eminent domain issues. The board discussed passing Resolutions of Necessity to move forward with proceedings 58 times in 2022.

7-Eleven, through Valencia-based attorney Douglas Gravelle, questioned the need for what it called a “temporary construction easement.”

HSRA documents say the easement will last for a maximum of 36 months.

Attorneys for the state told the board that what they were doing was legal, and the issue was a matter of compensation.

The city of Fresno is also a defendant, listed as an “easement grantee” in the lawsuit. A city spokespersons did not respond to GV Wire’s request for comment.

A case management conference in Fresno County Superior Court is scheduled for Sept. 13.

You can a map of the envisioned High-Speed Rail system at this link. 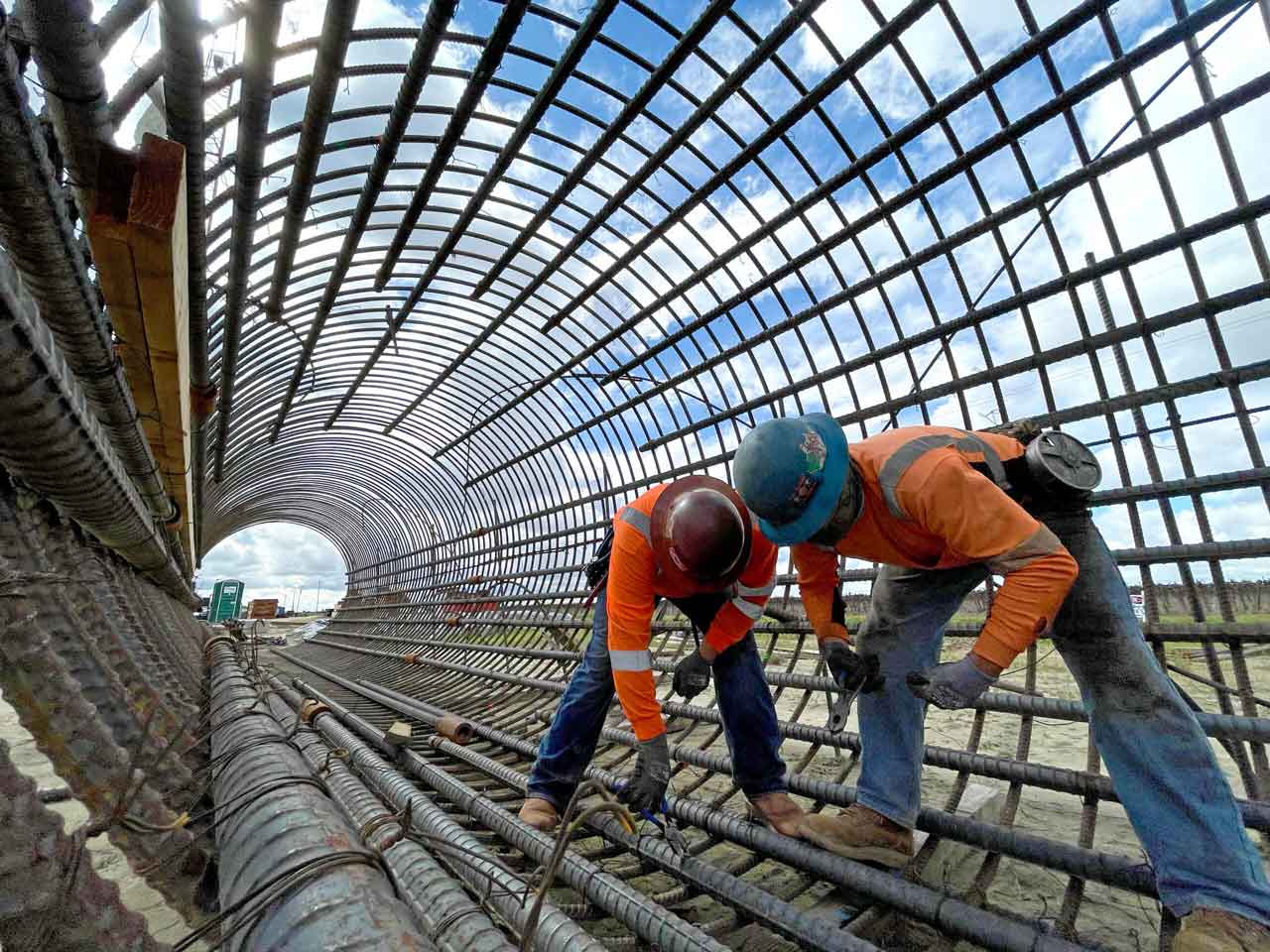 Ironworkers assemble a rebar cage for the viaduct that will carry high-speed trains over Conejo Avenue and the BNSF line. The viaduct is between Willow and Peach avenues, west of State Route 43 in Fresno County. (CHSRA)