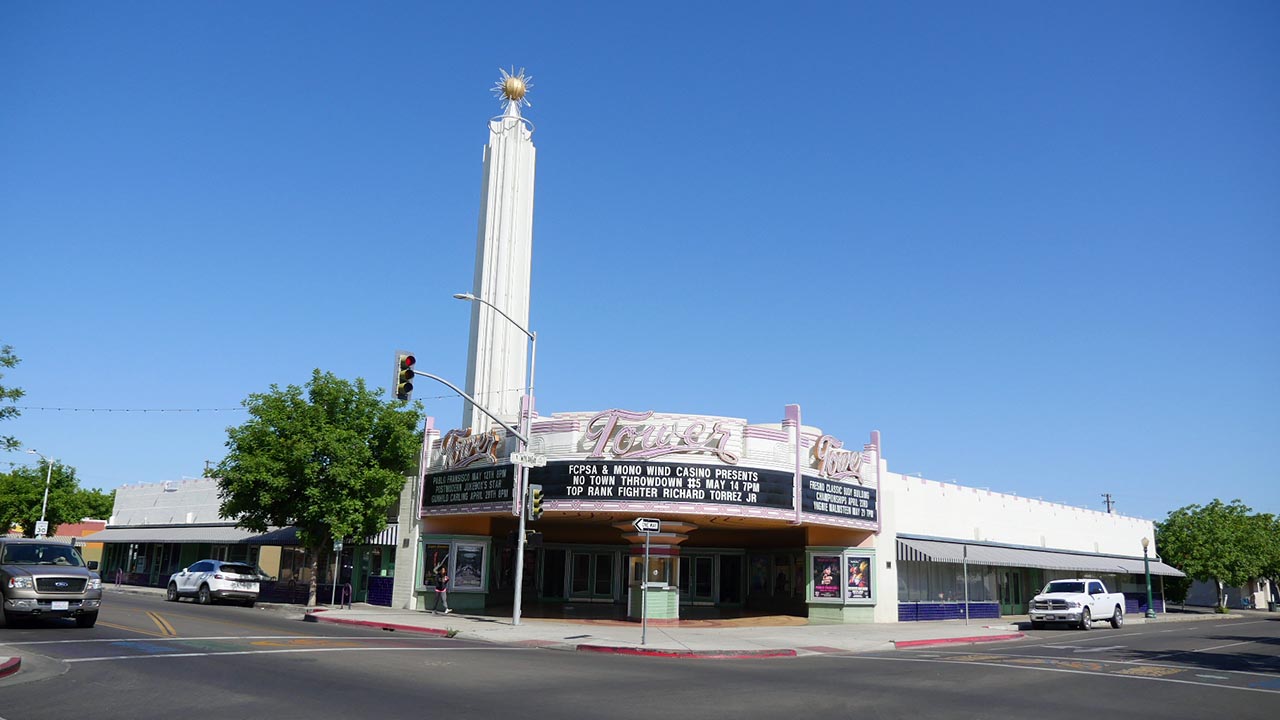 Adventure Church is asking a judge to halt the sale of the Tower Theatre to the city of Fresno. (GV Wire/Jahz Tello)
Share with friends

Following up on its promise, Adventure Church is asking a judge to halt the city of Fresno’s purchase of the Tower Theatre.

The church accuses the city of interfering with its right to purchase the theater.

But, on Thursday in a hearing lasting less than five minutes, the parties agreed to wait until June 16 to present arguments on a preliminary injunction.

In return, Tower Theatre attorney Matt Fletcher said the theater will not close escrow any sooner than June 17.

Because of the delay, Judge Kristi Culver Kapetan determined that a ruling on a temporary restraining order was not necessary.

Two months before the Fresno City Council approved a purchase of the Tower Theatre for $6.5 million, the city made an offer for the same property for $4 million.

Exactly what happened or why that offer was not accepted remains a mystery. The parties involved are not saying much.

The sale of the Tower Theatre, before and after the city purchase, is embroiled in legal controversy. Adventure Church is moving forward in its lawsuit against the current owners of the theater. The church said it will add the city of Fresno to the litigation at a future date.

A recent court filing by the church revealed the city’s offer — approved by the council — in a letter dated Feb. 2, 2022.

The deal expired on Feb. 9 and apparently was rejected. Neither Laurence Abbate — the public face for the family that owns the theater — nor his attorneys, responded to GV Wire’s questions.

A Difference in Price

Why the difference in price?

“I know that there was new information that came during mediation and what wasn’t previously included was the Me-n- Ed’s parcel and then I don’t know what was included in that,” city manager Georgeanne White told GV Wire. She said the parcel — leased by the pizzeria from the theater — was valued at $1 million.

Pastor Anthony Flores of Adventure Church confirmed that was one of the differences between the February offer and the April purchase.

What accounts for the remaining $1.5 million remains a mystery.

Councilman Miguel Arias has been involved with the city’s purchase. He said the court-ordered mediation was a result of Sequoia Brewing’s lawsuit against Tower Theatre. But, he couldn’t say much more.

“I can’t get into discussions of real estate negotiations either during any real estate offers or during mediation,” Arias said.

Flores said he walked out of the mediation, but could not reveal more details.

“My heart is saddened by the offer that was presented. It was very disheartening,” Flores said.

Those documents might be made public, Arias said, once all litigation is concluded.

The city’s offer — based on mediation results — was not only for an elevated price but included the city absorbing legal costs and offering to finance Sequoia Brewing’s purchase of the building it leases.

Other costs, such as how much work is needed to bring the historic theater up to code, are unknown.

“Once we become the official owner, we’ll have to go inside and take a look and see what needs to be done,” White said.

Some of the purchase funding will come from Measure P dollars — city funds dedicated to parks and arts. Arias said the exact amount is not known until the purchase is completed. White pegged the figure at $4.5 million.

The city will sell the parcel of land already leased by Sequoia Brewing for $1.2 million. The net price will be $950,000 when credits are calculated.

The deal includes a 30-year loan from the city to finance the purchase, at a below-market rate of 3.5% interest. The monthly amount to repay the loan is $4,266.

The market rate for a similar real estate transaction is around 6%. At that rate, the monthly repayment is $5,696.

The current lease between Sequoia Brewing and the Tower Theatre owners is for $4,500 base rent a month. The lease expires in July, although some documents indicate it was extended through 2030. Either way, the lease would be terminated when Sequoia Brewing completes the purchase.

With the favorable loan, Sequoia Brewing would save $234 a month.

Attorneys for Sequoia Brewing will receive $325,000, according to the deal.

Litigation remains between the church and theater owners.

The Tower Theatre has hired new attorneys. In a filing, they estimate costs of $17,210 to dismiss the current litigation.

The city would pay those fees under its deal.

The Irvine-based firm of Connor, Fletcher & Hedenkamp LLP told the court that its three attorneys charge $350 an hour — a discounted rate for this case.

Why Does Adventure Want Tower?

Flores said his church’s location at another site in the Tower neighborhood was “busting at the seams.”

During the pandemic, the church began leasing the theater for Sunday services and occasional Wednesdays. City documents indicate the lease price was $3,000 per week.

“We don’t want to leave the ministry we’re doing in the Tower. We don’t. And when Laurence (Abbate) approached us about buying this, we thought to ourselves, you know, we have room for our congregation, but we also have room to do other activities for the community with the gorgeous theater,” Flores said.

With favorable court rulings and the city purchase, Sequoia Brewing’s lawsuit would be essentially settled.

Part of the Adventure Church lawsuit returns to court on June 8. Tower Theatre is seeking to strike allegations made in the lawsuit that it breached the initial 2020 agreement to sell. Both parties agreed to move up the hearing by four months.

Court briefs from Adventure Church and Tower Theatre make their arguments about whether the deal to sell is still valid. Hundreds of pages of legal filings attempt to answer the main question — did escrow expire on March 31, 2021, and what is the significance of that?

Motions on the lawsuit itself will be heard in November.