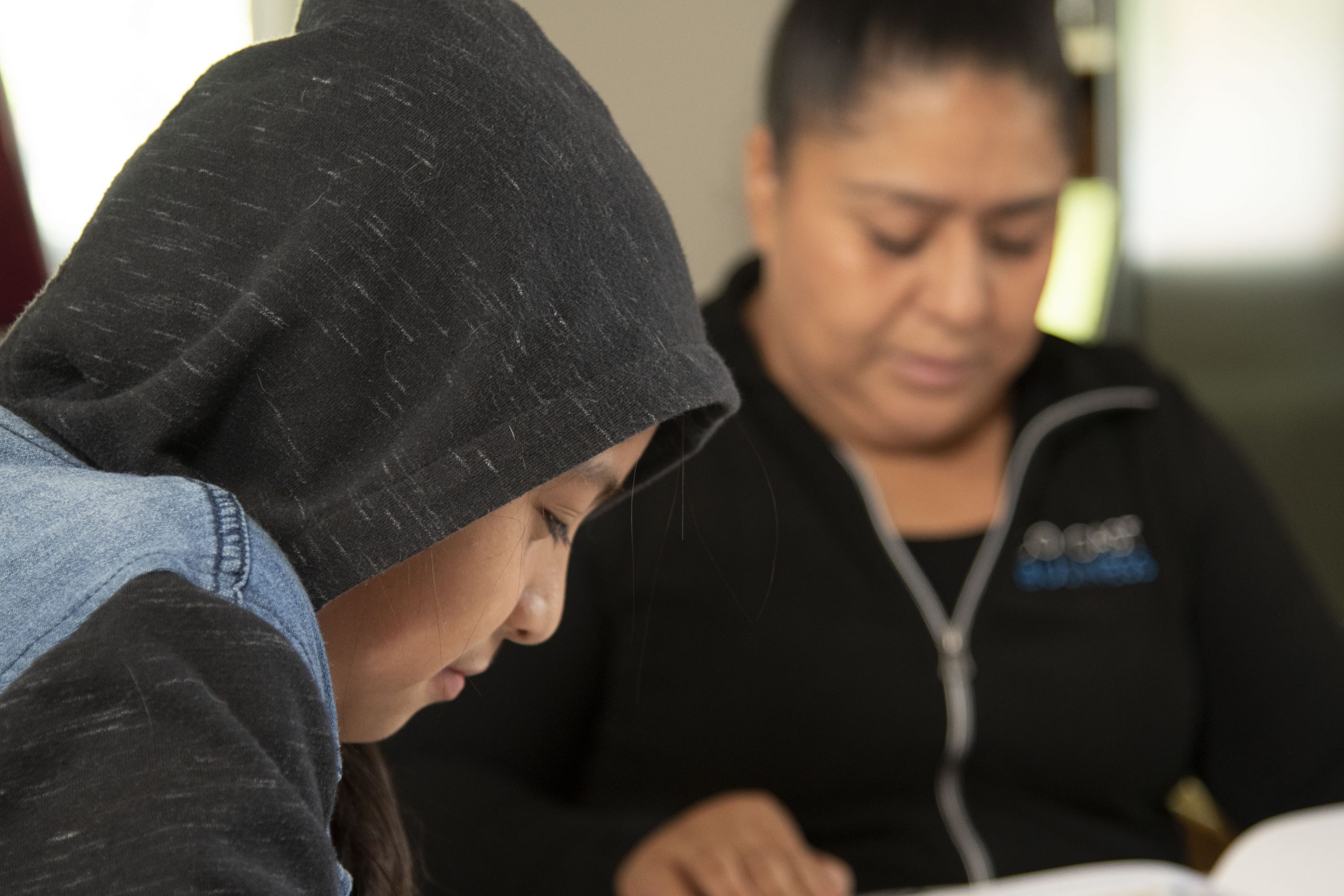 Parent Merlin Dimas, seen here with her 10-year-old daughter Ester, says it's important for parents to be involved in their kids' schoolwork. (GV Wire/Albert Baker)
Share with friends

Merlin Dimas wishes she had known when she was raising her first four children just how important it is for parents to be involved in their children’s schoolwork and positively motivate them.

She blames herself that her four older kids didn’t go to college because she didn’t encourage them to do their best academically. “I … just open the door and say, ‘Bye, see you guys later,’ and not even words to motivate,” says Dimas, a native of Guatemala City who learned to speak English after coming to America at age 12. “You know, ‘I love you, I’m waiting for you later.’ I started learning this when I started going to the (GO Public School Fresno) meetings.”

Dimas is now a vocal advocate for GO Public Schools Fresno, a nonprofit advocacy organization that works with parents as well as the district on making Fresno Unified a better district. She says the training meetings helped her learn better ways to communicate with her children and their teachers, and also gave her the courage to reach out to other parents and encourage them to become more involved with their kids.

It’s hard to break the style of parenting that is passed down from generation to generation. Dimas says her own mother could be harsh, and through GO Public Schools Fresno she learned the importance of positive motivation instead of negative name-calling.

“My mom never hit me, but she hit me with her words,” she recalls.

Dimas says she was reminded of how she herself was hurt by her mother’s words when her daughter said she was sad when Dimas called her “burra” — Spanish slang for dumb.

“I changed my words before because one of my daughters, I was ‘you burra, you don’t listen, c’mon, you can do better.’ And I see that word, the burra one, this was dumb in English, that one hurt her.”

Dimas said she realized she had to change to a different style of motivation. “I say … I love you, I know you can do better.’

“Now her grades are better. And it’s a difference, but only a simple word can kill their heart.”

Later, when one of her daughters said she didn’t want to keep going to middle school because of how one of her teachers was treating her and her classmates, Dimas says she learned that the teacher was barking orders and yelling at the class.

Dimas went to school to speak with the teacher, who said he was trying to reach those students who weren’t paying attention.

“And so I say, ‘I do worry about the ones that don’t listen, but my daughter’s in the position of the other side, so I need her to feel comfortable and good,’ ” she recalls.

Her metamorphosis into an involved parent came about after a bad driver nearly hit her and her younger children while she walked them to their school, Webster Elementary. After the fourth near-miss by the same driver, Dimas approached school officials and asked if she could volunteer to be a crossing guard for the school. That volunteering led to more and more school involvement, and becoming connected with GO Fresno.

In addition to volunteering for crosswalk duty, Dimas helps out with English translations for parents at the school, for teachers in classrooms, and on field trips.

As the crossing guard, Dimas got to know many of the Webster children. When one sixth-grader started to come to school with low-slung pants, emulating the fashion style of gang members, Dimas says she asked him why he was wearing his pants so low and then told him, “Well, I’m going to be honest with you, and I’m sorry if I’m going to hurt you with these words. But you look like you poop. You don’t look no nice. And then he said, ‘Oh, lady, you’re hurting me.’ I say, ‘if you put your pants and your belt normal, you look handsome, but like that?’ ”

The next day the boy came to school with his pants pulled up and his belt cinched around his waist, Dimas recalls happily.

Likewise, she would try to cheer up kids who came to her crosswalk with tears running down their faces.

“Believe me, I see a lot of kids crying over there and I say, ‘Why is your face look like that?’ ‘My mommy was screaming to me and telling me all kind of stuff.’ I said, ‘Why, you look handsome, c’mon, clear your tears and you can do it, my friend. Come on, let’s go to school and you’re going to be doing good.’ These little words really make a difference.”

Although there was no college for her four older children, Dimas hopes it will be different for her four younger kids. She encourages them to talk about their career plans — one daughter wants to be a veterinarian, another “is going to be a cop, and her car is going to be pink,” Dimas says with a smile.

She now regrets her decision to drop out of high school at age 15, and she’s working toward earning her GED at Fresno City College.

Encouraging Parents to Get Involved

But her biggest impact may be in trying to encourage other parents, especially younger mothers, of how important they are to their children’s future success if they are involved now in their kids’ schoolwork and with their schools. When teachers reach out to parents, it’s important to respond and not ignore the messages, Dimas says.

Parents can learn, through classes offered at Parent University and GO Public Schools Fresno, different ways to motivate and discipline their kids, and how to keep them focused on their schoolwork so they can be successful, Dimas says.

It’s up to parents to make sure their kids spend time on homework instead of social media, learning the lessons of self-discipline that will serve them well when they are older, she says.

She wants to target younger mothers whose children may not have started school yet or are in the youngest grades, because that will have the biggest impact.

“We can teach our young new parents, that’s going to make a difference, but we have to start doing it now,” Dimas says. “We don’t have to wait for more time because day by day, the days are passing, and the kids are growing.”