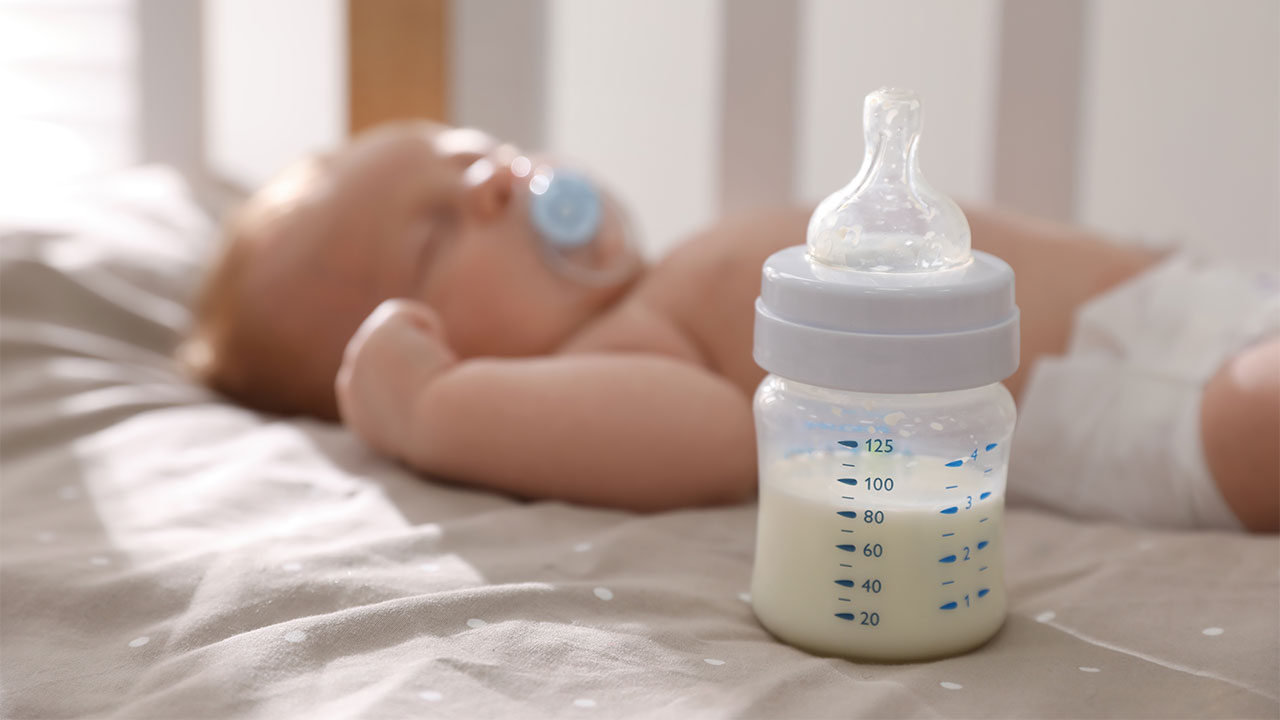 A Valley doctor strongly advises against making your own baby formula, diluting it, or sharing breast milk with others. (Shutterstock)
Share with friends

Amid a national shortage of baby formula, Dr. Hailey Nelson, a primary care pediatrician at Valley Children’s Hospital, advises parents against making their own formula or sharing breast milk with others.

Making your own formula could lead to a serious risk of contamination including making your baby very sick, while sharing breast milk with others could also lead to infections.

“Families are having a hard time finding formula and when you think about a child under age of six months, this is their sole source of nutrition,” said Nelson. “So that’s really stressful for parents right now.”

On social media, old baby formula recipes from as late as the 1960s have begun to circulate. 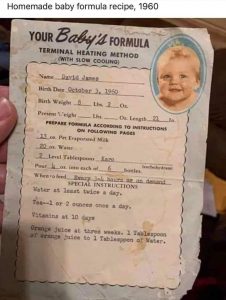 “There’s really a concern with these circulating recipes…this is not the thing to do for your child,” said Nelson. “Instead, on social media, reach out. Maybe someone has an extra can of formula that they can offer you, but please do not follow any of these homemade recipes.”

Nelson says baby formula is manufactured and the companies who produce baby milk have to adhere to strict regulations.

She also advises parents against diluting formula to make it last longer — adding water could change the formula’s nutritional contents and make your baby sick.

“There are regulations in place to ensure that you’re not introducing bad bacteria to your baby when you’re trying to feed them,” said Nelson. “Babies can get really sick. You also might not meet their nutritional needs, and so you can affect their electrolytes and cause different issues by, again, trying to make this at home.”

In February, Abbott Nutrition recalled several major brands of powdered formula and shut down a Michigan factory when federal officials began investigating four babies who suffered bacterial infections after consuming formula from the facility. Abbott is among a handful of companies that produce baby formula in the U.S., and the recall wiped out a large segment of the market.

To help mitigate some of the shortage issues, the U.S. Food & Drug Administration recently announced it was taking steps to help improve the supply of infant and specialty formula products.

And, on Monday, FDA Commissioner Robert Califf told ABC News’ “Good Morning America” that the federal agency is “working really closely with Abbott” to reopen the closed Michigan factory and he expects that “in a very short period of time we’re going to have an announcement about the path forward.”

Noted Nelson: “It really feels like in this last week, there’s been an acknowledgment that this is a problem and that there are some steps in place. I just don’t know from a timing standpoint how long it will take for that implementation to happen and for us to see more formula readily available for families.” 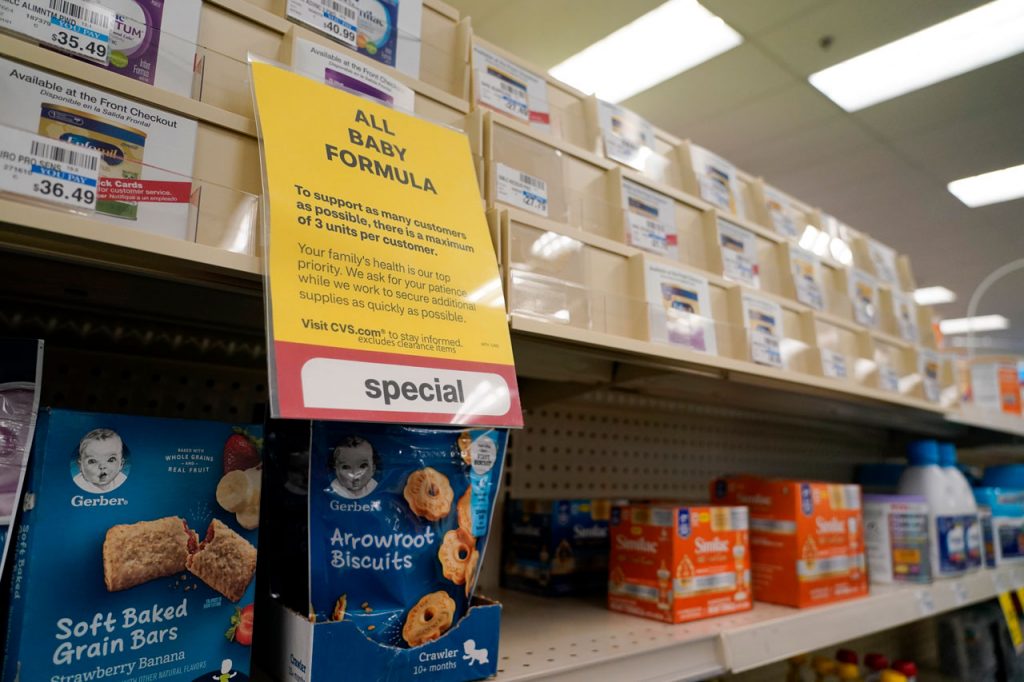 A sign is posted at a CVS pharmacy indicating a shortage in the availability of baby food Tuesday, May 10, 2022, in Charlotte, N.C. Parents in much of the U.S. are scrambling to find baby formula after a combination of supply disruptions and safety recalls have swept many of the leading brands from store shelves. (AP Photo/Chris Carlson)

Call Your Local Pediatrician if You Can’t find Baby Formula

Nelson recommends reaching out to your local pediatrician because they will always have some on hand to give away.

“If we have samples, we’re certainly going to give them to families,” said Nelson. ” If you get WIC, that’s another source where you can call them to see if they have formula that they can help connect you with.

According to Stephanie Buelna, Fresno’s EOC WIC assistant director, they have been helping locate formula for many of their clients after receiving several calls from women unable to find any in stores.

Luckily, it appears that the situation is starting to improve for those needing specialty formulas, said Buelna.

“If any of our WIC clients are struggling to locate formula, please call us (559-263-1150) so we can be made aware of supply chain issues and work on our end to help locate formula for our clients,” said Buelna.

While goat and cow milk has never been considered safe for infants under one year old, the baby formula shortage is causing some pediatricians to recommend limited use of certain animal milks.

In an emergency situation, Nelson says parents can give their kids over 6 months old whole cow’s milk as a safe alternative to formula as long as it is only used as a short-term substitute.

“So cows milk was previously not recommended until they turn one, so we really want to hold off on cow milk and milk alternatives until that first birthday,” said Nelson. “However, in an emergency situation, babies over six months of age, you can give them limited amounts of cow’s milk while giving them vitamins, including iron, and then hopefully find your formula soon.”

Nelson added that the American Academy of Pediatrics, of which she is a member, recently announced the change.

Health officials recommend exclusively breastfeeding babies until they are 6 months old, but federal statistics show that only 1 in 4 moms are relying on breast milk at that age.

According to the Centers for Disease Control and Prevention, 60% of mothers stop breastfeeding sooner than they had planned.

Mothers face challenges to long-term breastfeeding, including returning to work, not producing enough due to stress, or the inability of the baby to latch on.

Nelson, who is a certified lactation consultant, hopes that with the national shortage, expecting mothers could get additional help with lactation support to work on breastfeeding.

Breastfeeding a baby often takes a village says Nelson, which means partners have to be on hand to help with other baby duties while mom gets extra time alone to feed the baby.

“Getting that good start is important and then continuing to have the support that you need,” said Nelson. “Breastfeeding is not just mom and baby. It is a team effort and so dads can help with this, too.”